The Apocalypse, and Wedding Update 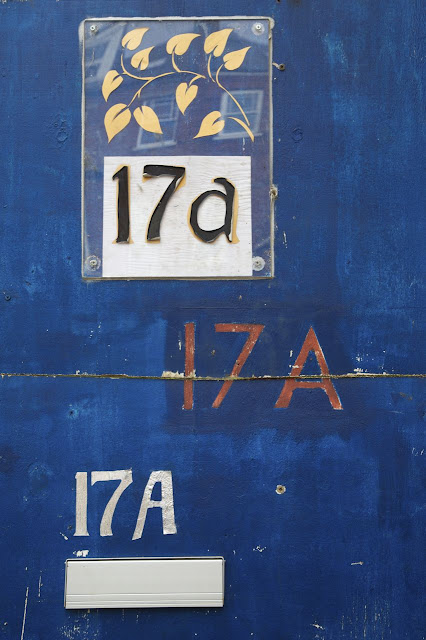 We are definitely moving into fall. We've turned the heat on a few times, just for short bursts in the morning, and the blackberries in our back garden just don't taste good anymore. They're bitter and underripe, despite their dark coloring -- without the warmth of the summer sun they're just not going to get any better.

This has been a strange summer -- very cool and wet. Our tomatoes never ripened and I'm not sure they will. We thought this was our fault until we watched Monty Don on the trusty "Gardener's World" TV show and he assured us this is a national phenomenon. I suppose I should be happy to have had any blackberries at all. (Then again, blackberries are the cockroaches of the plant world. They'd survive nuclear holocaust.)

Speaking of climate, I read an interesting series of articles in this month's Utne Reader about gracefully accepting the decline of our civilization. They quoted a number of people, from a survivalist couple in Canada to a former environmental activist who has essentially given up. The argument is that humanity will not be able to stop its downward spiral of energy overuse, overpopulation and climate change, because we're programmed to behave that way -- to procreate, to make ourselves comfortable. Even when we know what we're doing wrong, we're going to keep doing it.

One of the articles suggests taking the long view, looking at Earth's ecological changes in terms of geologic time. The extinctions that we're experiencing today are only the latest in a process that began thousands of years ago with the woolly mammoths and giant sloths, partly hunted to death by people. Today's extinctions would happen anyway, at some point or other, and after our civilization inevitably crashes, other dominant species -- likely a succession of them -- will rise and fall in our place. In fact the Earth itself will eventually cease to exist, and there's no reason to expect that life won't rise anew, elsewhere in the Universe.

I don't think this means we're supposed to shrug and do nothing. We still ought to alter our behavior as much as possible, if only to inflict less harm on other creatures in the (geological) short term, and perhaps mitigate the misery that will certainly come when the Earth can no longer sustain our burgeoning population. But the articles suggest living with an awareness that we're headed down this path, and rather than fighting unrealistic fights and despairing at our lack of success, being with that awareness.

It was interesting, and oddly comforting. (I tried without success to find these articles on the Utne web site. But I did find a column by Rebecca Solnit urging a continued activist approach.) 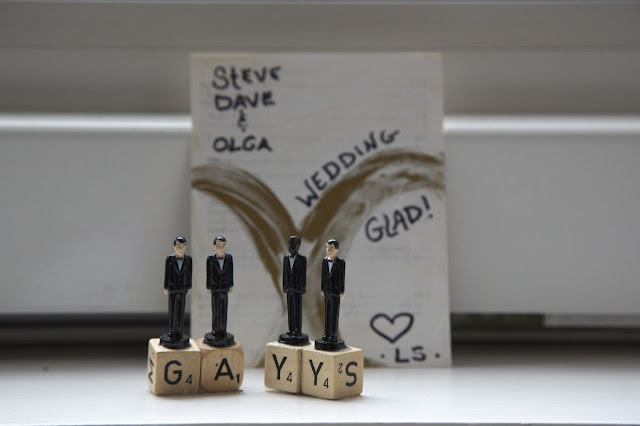 I got home last night to a little present from my blog pal Linda Sue, wrapped in cheerful brown paper patterned with canine footprints. She sent us a couple of bags of exotically named coffee from Washington State, that bastion of coffee culture -- "Deadman's Reach" and "Three-Peckered Billy Goat" -- as well as a nice herbal soap. But best of all, she sent not one but two pairs of gay grooms for our wedding cake. (And one of them is black! Who's the black guy, Linda Sue?)

We were tickled and we put them on the windowsill to cheer us on. We're still collecting RSVPs from our relatives for our Dec. 29 wedding party, and we're going to order food this week, I think. Even though the party is months away, my friend Sue, our official party planner, suggests ordering early because it falls right in the middle of the holiday season. Which makes sense.

(Top photo: House numbers on a plywood wall around a construction site in South Hampstead.)
Posted by Steve Reed at 7:12 AM

17 A. For sure. No question.
Aw! Are you guys getting excited? You should be. This is a REAL wedding and as such, it deserves excitement and joy!
Who IS the black guy?

LOVE the plywood/ 17A! And you are so right about blackberries, they are the worst besides morning glories that snake around everything , squeeze and choke the life out of trees, everything, EXCEPT blackberries. Glad you got the parcel, silly as it was, and the black guy is the guy we all lust after...even though we are all married. Exciting to actually have a ceremony , gathering the support of those who love you and wish you well. It is important especially for you two living so far from family and old friends. Love goes with you! The wedding party- not just for you two but for everyone, those who will watch your back throughout. You are the lucky ones!

I love the gay grooms! What a wonderful gift!

definitely the end of summer here too though it is still hot and humid...mid 80s to low 90s. and your wedding is going to be wonderful.

I meant to add, that it is my opinion that human beings will be one of the least successful life forms this planet has ever produced in terms of longevity. We've only been on the planet 50,000 years and are already in decline.

_ Or is it "have your back"..anyway, you will have their support throughout your long and happy marriage! AND what Ellen said, humans are a failed experiment on this planet, maybe Mars is more human-ish- nothing to ruin!

the grooms are darling. and olga is in on the action, i see.

Have you read any Neal Stephenson? After those thoughts I think you might like him. I LOVED his Anathem. Lately I read his last, Seveneves, which deals with issues of - well, you'd have to find out if you haven't already. :-)

Love the gay grooms - and Linda Sue's response about them. Ha! When I was in Zambia I did have a couple of dark gentlemen who would probably have liked to marry me - for my U.S. passport. Ha!