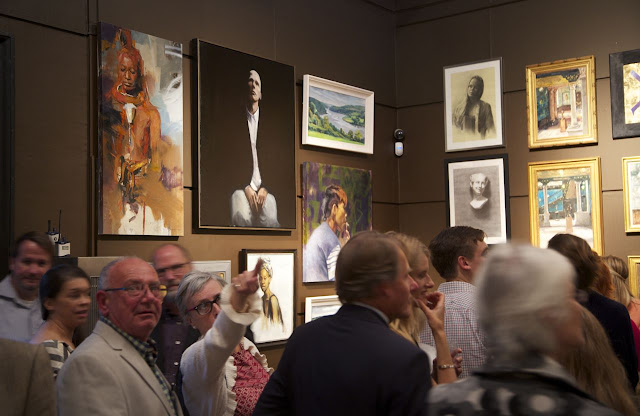 Last night Dave and I went to the opening of an art exhibit at the Leighton House Museum in Holland Park -- and there, on the wall, as we'd been told to expect, was me!

The monthlong exhibit is titled "The Craft of Drawing and Painting" and features artists who have worked and trained at the Lavender Hill Studios, an atelier in London. They include Martin, the art teacher at work who painted the recent portraits of me.

It was such a surreal experience to be looking at portraits of myself in a museum setting. (Both the small and the large portraits were on display, across the room from each other.) I felt sort of disconnected from them, like they weren't really me, but some other guy who just happened to look like me.

But several people in the room approached to ask if I was the model, confirming my sense that Martin captured my likeness really well. (One guy said I looked much happier and "less haunted" in person!)

You can see a blurry Dave at far left in the photo above, and Martin in the purple shirt, fourth from left in the rear.

It was a very cool experience.

Dave and I schlepped out to Holland Park on the tube and had dinner at the Mitre, near where we used to live in Notting Hill. I enjoyed the food but the menu descriptions seem a bit over the top -- albenga artichokes and grelot onions, a "cannon" of lamb (whatever that is). Apparently serving plain ol' onions and artichokes is insufficiently intriguing to diners.

We talked about how it seems so long ago that we lived in that neighborhood, even though it's really been just over a year. We reminisced about walking poor, decrepit Ernie and Ruby through the Notting Hill streets. (That was farther back in time.) We agreed we're much happier in our present circumstances!
Posted by Steve Reed at 6:38 AM