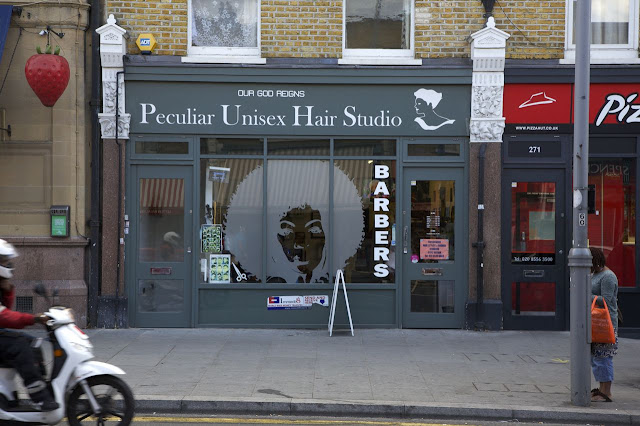 I went out to Leyton yesterday to do some more photography for, yes, Bleeding London -- the project that would not die! The organizers are still trying to fill some gaps in coverage for the online gallery, so I got some street lists and went shooting.

I was out all afternoon. I popped into Pret for a sandwich after my French class, which ends at 1 p.m., and then caught the tube -- and I'd say I was shooting for about four hours. The needed streets were not always contiguous, and there was a lot of walking from one point to another.

I had a rough idea that I would walk northwest and catch a train from the Lea Bridge station. But when I finally got there, hours later, imagine my surprise at finding the station not only closed but completely gone. A huge renovation project has left only rubble in its wake. So there I was, stranded, not really knowing the area and all walked out. I caught the first bus toward town and figured it had to pass a tube station at some point. It did, but only after weaving through Hackney and Shoreditch. I got home two hours later!

I was initially thinking about going out today to shoot more, but I think I'll save it for next weekend. I gotta pay some attention to Dave and the dog.

Overall, I did get some good pictures, though, so I can't complain. I always find interesting stuff in Leyton. Remember the "Peculiar" barber shop above? I shot it a few years ago but was never happy with that image because of the big ugly trash receptacle out front. This time I got a much cleaner picture!
Posted by Steve Reed at 6:57 AM

That's a picture that bears close inspection:
The unexpected "Our god reigns" over the name.
The giant strawberry to the left - does it belong to the very stately-looking building next door?
The two decorative bits at the top of either side of the shop look to be two different sizes.

I think my dreams are channeling your life. I'm always in some big city, lost and stranded. Last night some guy kept trying to bring me to Jesus. I wasn't having any of it.

love the picture. the only time we were walked out was in DC doing all the monuments with the last being quite far away. the thought of walking back was daunting so we caught a cab.

I thought the sign said "Our GOO Reigns" - ha!

great photo , I kind of like the first one best, do not mind the black box in front at all. It looks like it belongs. Leyton , holy smokes that is far away really. when you consider that there is not much reason to go there, compared to all of London. The BUG made me choke on my coffee, the coffee that Mr. Man built, finally ,in the end, a good cup.

What the Bug said, LOL...My eyes must really be going...

Great picture. I do prefer it to the older one - easier to see the details. You got a lot of exercise!