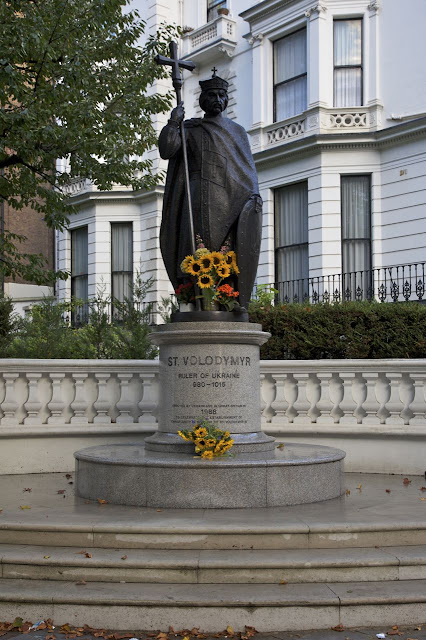 Dave and I went last night to the annual Trustee's Reception for the school where we work. It was held in a large hall beneath the Globe Theater, on the South Bank of the Thames, and consisted of all of us mingling with the same coworkers we'd just spent the day with at school. Well, with spouses, trustees and former employees thrown in. It was actually quite fun, and there was wine, which certainly smoothed the socializing. (I Googled up an appropriate Shakespeare quote, from Othello, since we were at the Globe: "Good wine is a good familiar creature, if it be well used.")

Then we went out to dinner with the Music Department near Waterloo, and there was more wine, in addition to beetroot salad and scallops and chocolate souffle, and by the end of the evening I was quite happy to climb into a cab for the trip home. It was the most scenic cab drive I've ever had in London -- through St. James Park along the Mall and right past Buckingham Palace, where the windows were mostly dark except for a tiny one on an upper floor. "Look!" Dave said. "The Queen is in the loo!"

We circled the immense monument to Queen Victoria in front of the palace, and talked about the fact that Elizabeth has now surpassed her as the longest-serving monarch. Honestly, though, I think Victoria deserves bonus points for living so long in an era before antibiotics.

(Not that any germ would dare infect royalty.)

I was thrilled to discover yesterday that my French class doesn't begin until next weekend. So I have one more final Saturday free of commitment! It's supposed to be cloudy this weekend so it probably won't be great for photography, but at least I'll be able to get out with the dog.

(Photo: The statue of St. Volodymyr, a medieval ruler of the Ukraine, in Holland Park.)
Posted by Steve Reed at 8:08 AM

I love this post. Something so gentle and companionable about it. You sound happy.

yummy dinner! I could eat that every day! Nothing like a beautiful cab ride in the evening with your loved one, and seeing the Palace potty light, pretty sure that the queen never uses it- she does not need to, ever! Must have been Philip, checking to see if he is still vital.

I can close my eyes and picture that cab ride! I do love London.

Lovely evening! It's been a few years since I attended a work function like that. We used to have a VERY fancy banquet every year - evening gowns & tuxes. It was something else. Now we get a picnic at a second rate amusement park - great for families, but not so great for middle-aged overweight introverts :)

An enjoyable night out...I would have liked the cab ride, too.

I've never been to London, yet when I visit you here, I feel like I have --