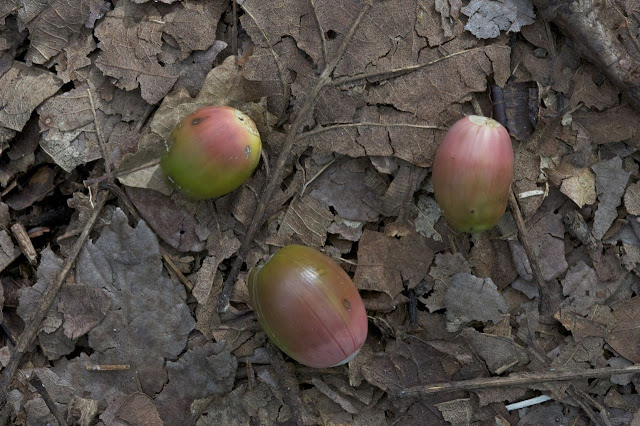 As I walked Olga on the Heath on Sunday, we kept hearing popping and rustling sounds in the trees. Olga, who is very attuned to treetop noises because they could be a SQUIRREL, just about went crazy. But the sounds were just acorns, falling by the thousands, because it's that time of year. I noticed that they're a bit pinkish, which I've never seen in an acorn before. 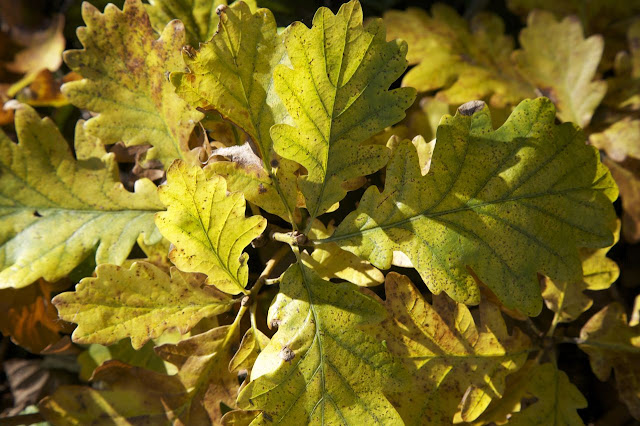 We're starting to see more colorful leaves, too. England never has leaves as psychedelic as North America's -- my hunch is that overall we have more oaks and fewer maples, and it's the maples that really take on those deep red colors. Here's an interesting article about why Europe lacks the vivid red fall tree color found in North America and Asia -- it may have to do with the position of mountain ranges during the last Ice Age. Who knew?! 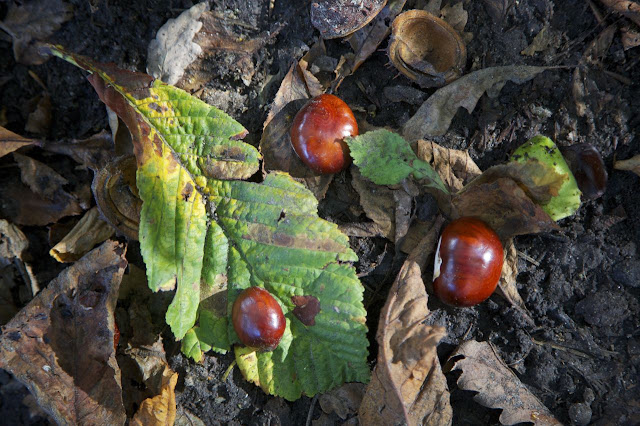 The chestnuts -- or as the English say, conkers -- are falling now, too. They always look so beautiful, clean and shiny, jewels of the forest. They look too nice to be left lying in the dirt!

This has been a good week for finding things on the sidewalk. I found a credit-card holder (no identification) containing a subway card with £15 on it -- and the holder is a little handmade cloth thing that's pretty cool. I think I'll use it.

I also found a box of discarded music CDs from which I pulled a few that I thought I might like -- some  homemade mixes and a copy of "Forever Changes" by the '60s band Love, which is a terrific album! I am getting my psychedelic groove on with that one. (How often can I use the word psychedelic multiple times in one blog post?)

Finally, did I mention that the squirrels have completely destroyed our squirrel feeder? They got impatient with having to lift the lid, and decided it would be easier to chew the side away and remove the plastic window. The feeder has been reduced to a ragged box with an open front and nothing to hold in the nuts. I'm going to try to glue the window back in place. We'll see.
Posted by Steve Reed at 6:34 AM