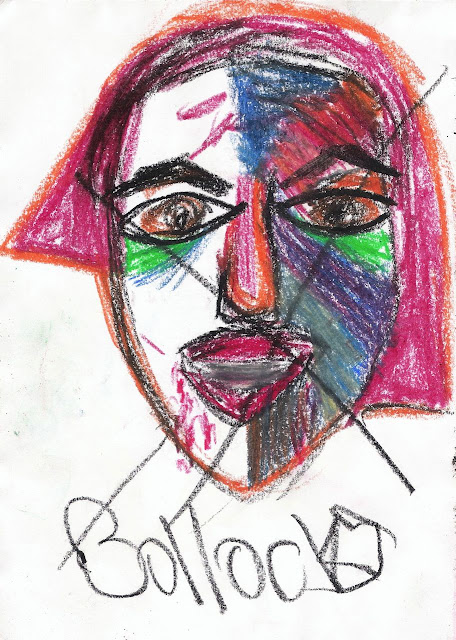 While walking yesterday morning, Olga and I found a rain-soaked sketchbook lying on the sidewalk outside a grocery store, near some trash bins. I picked it up and noticed it was full of artworks, so I brought it home. It was sopping wet but by the time we got to the house it had stopped dripping, at least, and I was able to dry it during the day while I was at work.

When I looked through the book, it quickly became apparent that the sketcher, whoever he or she was, wasn't much of an artist. But the sketchbook told a story nonetheless. 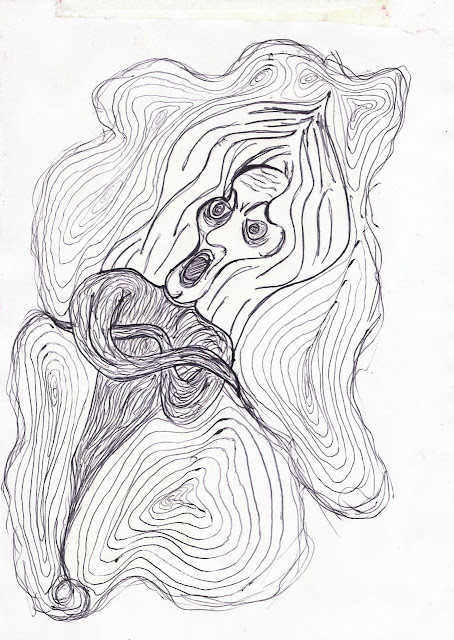 Many of the images were dark. I soon realized the sketcher was drawing more for the sake of therapy than artistic expression. 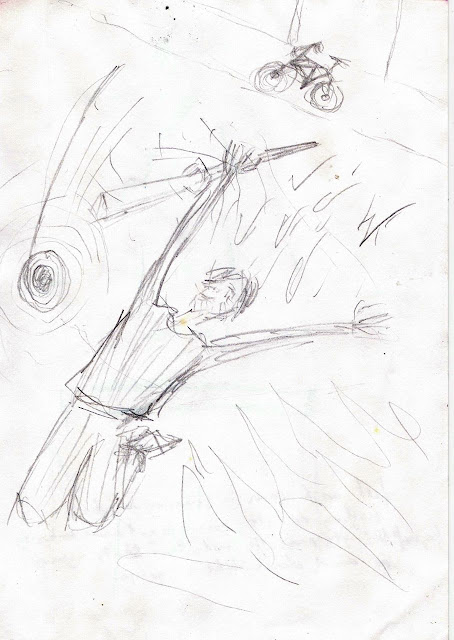 Some of the drawings, like the one above, had notes on the back:


Feel as if rain is burning my face
tingling no it's going to get more intense
beginning to feel its near the end, then starts again
up and down like a yo-yo.

Soon it became apparent that there was, perhaps, a specific struggle going on. 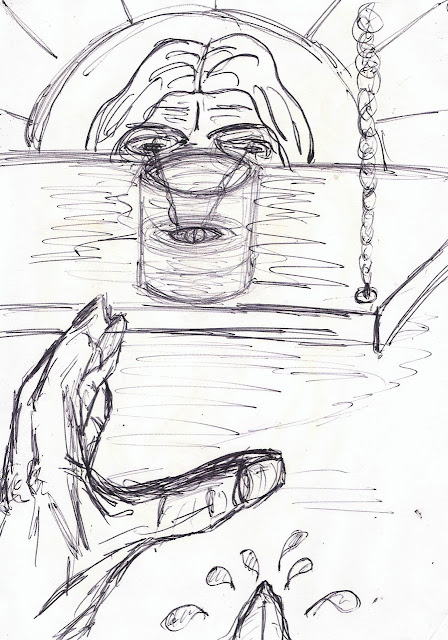 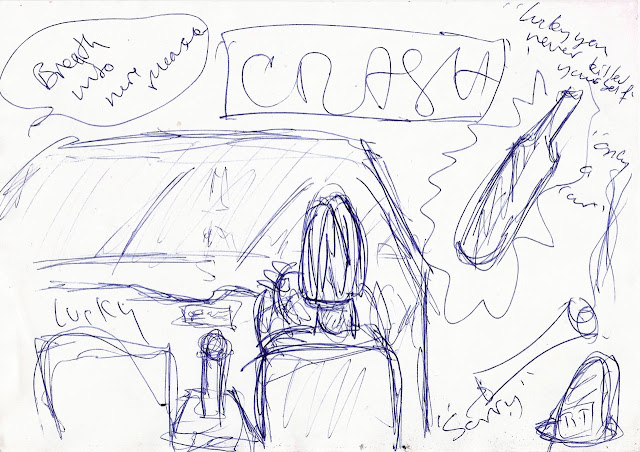 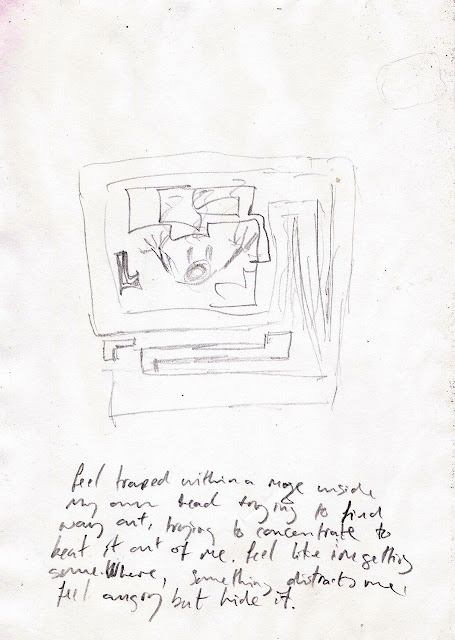 feel trapped within a maze inside
my own head trying to find
way out, trying to concentrate to
beat it out of me. feel like i'm getting
somewhere, something distracts me,
feel angry but hide it. 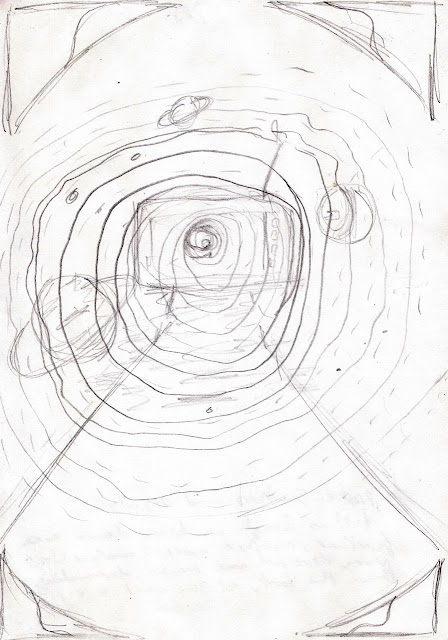 hypnotic sounds and visuals.
feel as though i'm being drawn even
further, another world, another stage
more developed and mentally demanding
than the last, not sure what to expect 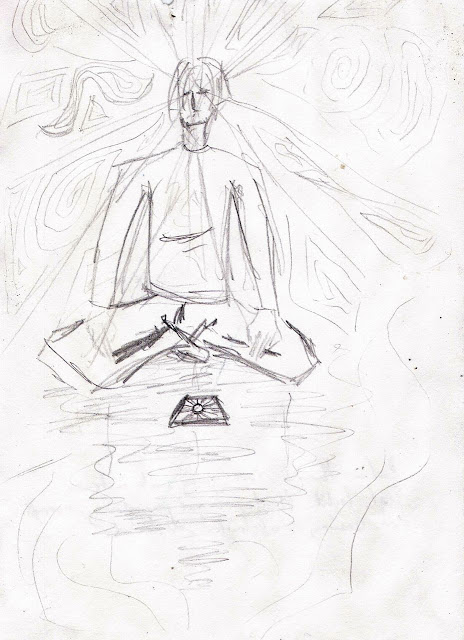 feel as though i'm going into a trance,
feel light, floaty, heart pounding, everything
i'm seeing is abstract, distorted.

These were the best sketches, I felt, showing something of a progression, though there were many others -- the entire book was full. There was no specific conclusion.

So what are the ethics involved in my deciding to post them? Well, their message seems to be worth something, and while I certainly don't want to violate anyone's privacy, there are no identifiers attached to the book or the individual drawings. I don't know whose they are. I couldn't even begin to guess.

It's a bit like posting entries from that diary I bought at the estate sale years ago (which I still have, by the way). Maybe these drawings will speak to someone. Maybe their story of anonymous human struggle, however ambiguous, is valuable.
Posted by Steve Reed at 6:54 AM

Hmmmm. What is going on there? Every sketch has its own story I'm sure.

Whoever did these, I hope they found some peace. Powerful images, even if not technically "good." From the heart and soul, both words and pictures.

Fascinating. And how interesting to watch what does seem to be a process of thoughts and emotions.

art therapy can unlock and define what is most confusing - when rational linear thought processes just don't cut it- generally, it is very personal ( though many are able to relate) and generally it is not pretty art. My friend has been working through some childhood trauma with "art", manifests from a black crayon, heavy, dark ,stabbing strokes...lately she has introduced color and light! therapy. that helps and does not cost much, the price of paper and crayon. Thanks for posting these, amazing, really. You were the right person to have found this treasure.

Wow-quite a disturbing find. Hopefully the owner deliberately threw it away as they have made some progress in their struggles. Hopefully...

The human condition in a sketch book. Discarded on the street. Rescued. So many metaphors here.

Unfortunate that the owner lost it, but the next best thing that could happen would be for a compassionate photographer to find it and try to bring something positive from the contents.