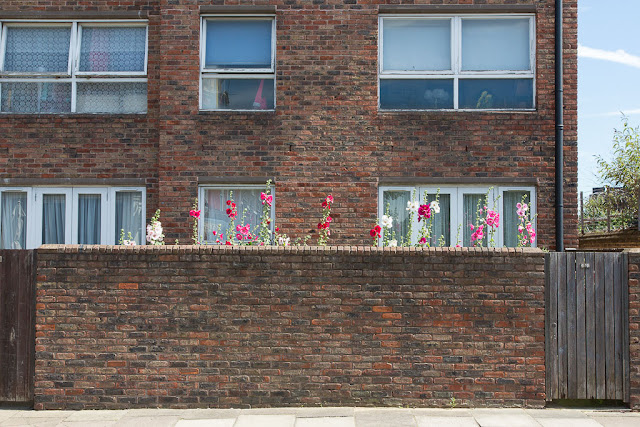 Yesterday morning I got up and went out into the garden, and was confronted by a pungent, unpleasant smell. Really pungent. Like the cargo hold of a fully loaded shrimp boat that's been locked up at port for a week with no refrigeration.

I found a bag of garbage that had been torn open and its contents spread across our grass. I can only surmise that Mr. Fox retrieved it from some local trash can and brought it to us. How thoughtful of him! I wasn't wrong about the smell, either -- rotten eggs and last week's scallops. Lord. I picked it all up and hosed down the grass, but the smell lingered until midday.

The rug cleaning people did come to collect the rug on Wednesday. Now that it's gone, I'm kind of wondering why we have a rug at all. It's pretty nice in the living room with just a bare floor, and it would certainly be easier to keep clean!

Also, ever since we moved in two years ago, Dave and I have been hating the living room drapes. Saggy, dusty and colorless, they served no purpose since we never closed them -- our garden is pretty private, and even if someone were to look in, all they'd see is us reading or watching television. So we took them down entirely -- even the curtain rods, where possible. Again, the room looks much better! So much light!

We're apparently doing the minimalist thing, at least during the warmer months of summer. Maybe when winter returns the rug will feel better on our feet.

We've planned our trip to Copenhagen a week from tomorrow -- bought our tickets and our hotel room. We'll only be gone three nights, but long enough to stroll the Tivoli Gardens and enjoy a Danish beer or two. This will be our one fun trip of the summer, so I'm looking forward to it!

Also, I solved my colonoscopy problem. I found a hospital where I can have one done privately, and although it's expensive, it's not insanely so. I'm going for it. Monday is the day. Dave and I met with the gastroenterologist yesterday for our initial consultation and he agreed that my family history warrants the colonoscopy. He seemed surprised that my NHS doctors wouldn't recommend one -- he said he was willing to write them a letter and suggest it, but it would probably take several months. I told him I was tired of waiting and I'd rather just pay and get it over with.

And finally, Dave and I celebrated our sixth anniversary yesterday. Although we married last December -- as you may remember -- when the law finally allowed it, we were first civil-unioned in New Jersey in July 2010. So we count that as our real anniversary. In addition to the gastroenterologist (how romantic!) we went to a local Vietnamese restaurant that we've always wanted to try. There was some unexpected excitement when a tragedy occurred at the train station next door -- suddenly lots of people were running and looking down on the tracks with expressions of horror. Dave and I caught a glimpse but we didn't want to see too much. It was an alarming yet useful reminder that life can be cut short at any moment. Any day could be our last!

(Photo: Hollyhocks in Lisson Grove, on Monday.)
Posted by Steve Reed at 7:34 AM