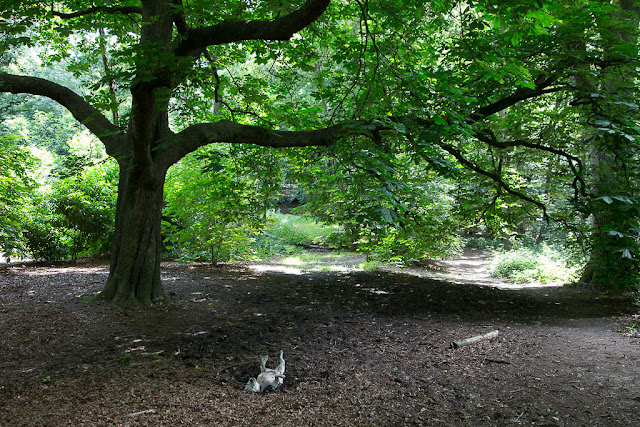 Olga and I went back to the Heath again yesterday -- I'm trying to give her lots of walking time since I'll be away for two weeks beginning tomorrow. (Dave is an excellent dog parent but he doesn't much like walking Olga -- he's of the firm opinion that she gets enough exercise romping around in the back garden. So she's unlikely to see the Heath again until I return.)

She found this tiny mud puddle in the middle of the forest and made the most of it. One good thing about walking her in the summer -- we can bathe her afterwards with the garden hose, which is much easier than putting her in the tub! 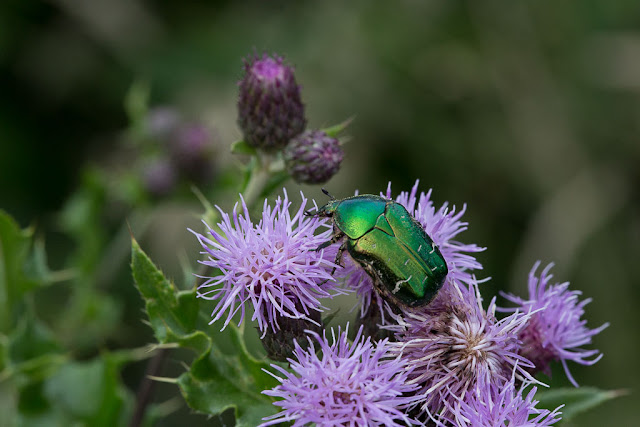 Here's one more picture for the "Small World" collection -- a shiny green beetle on some thistle, which we found yesterday. I believe this is a rose chafer beetle.

Dave spent yesterday in the garden, moving around some plants and putting a few new ones in the ground. He dug up the lupines, which you may remember were proving way too tempting to the snails, and put them in a pot -- we think we can defend them better that way. You should see how sad they look once removed from the surrounding foliage. They're just ravaged sticks!
Posted by Steve Reed at 6:55 AM