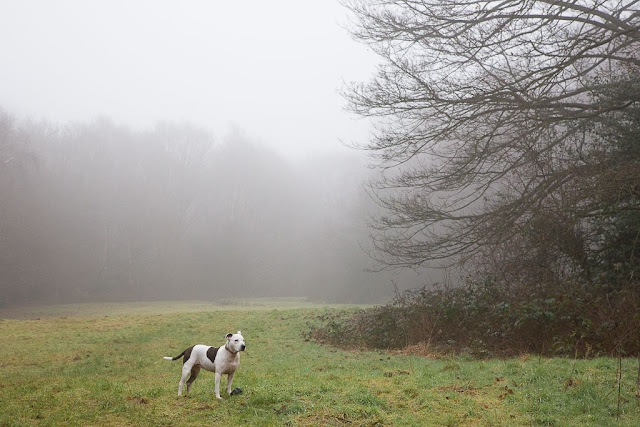 Dave went to meet an old acquaintance for dinner on Saturday night -- someone he went to culinary school with in New York, seven or eight years ago. I stayed home and watched some favorite movies, "The Ice Storm" and "Tony Rome," relaxing with the dog.

I went to bed about 10 p.m. and was surprised when Dave showed up a few hours later with his friend in tow. Turns out she didn't have anywhere to stay the night (she was visiting London this weekend from Cambridge, where she's working for a few months) and Dave offered our couch. My impression, in my half-sleepy haze, was that she was quite chatty -- but they'd had wine, so that wasn't surprising.

The next morning, though, she was still chatty. And she stayed. And stayed. I eventually bailed, taking the dog to Hampstead Heath around 10 a.m. She talked Dave's ear off for a while longer, apparently. 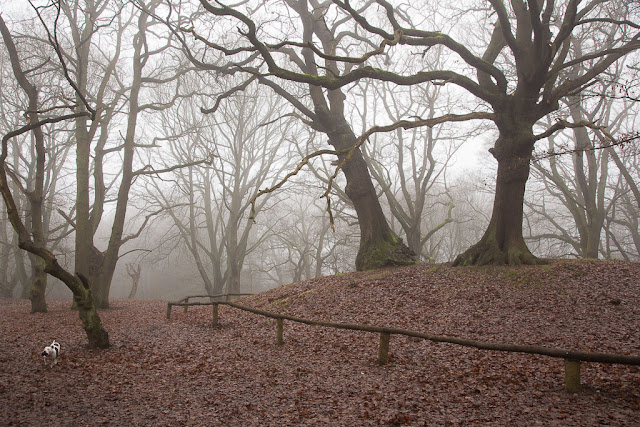 Olga and I found peace and quiet on the Heath, where a layer of fog turned the trees into ghostly dancers.

Here's a little history lesson: Apparently a previous owner of Sandy Heath, back in the 1860s, got miffed when he was prevented from building on the land and decided to mine it for sand instead. He sold cartloads of it to the railroad for construction of a railway line, and left behind Sandy Heath's distinctive rolling, hilly landscape. Much of the forest that blankets that tract today has grown up in the years since, but the two trees on the right in the photo above -- surrounded by the low wooden railing -- predate the mining. 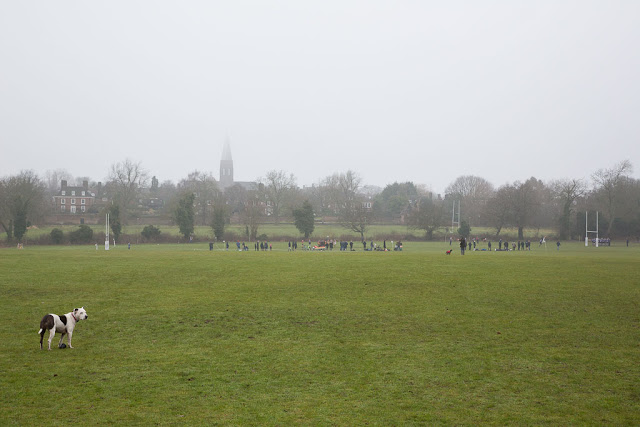 A rugby match was underway on Hampstead Heath Extension, but we didn't linger to watch. I don't know a thing about rugby and I can't think of anything more miserable than having to scramble around in wet, cold mud on a February morning.

We came back home, where the dog got a bath and then snoozed away the afternoon on the couch. I, meanwhile, finally finished "Telegraph Avenue," and I did laundry and changed the bedsheets and thus ended the day on a note of accomplishment! (It doesn't take much.)
Posted by Steve Reed at 6:42 AM