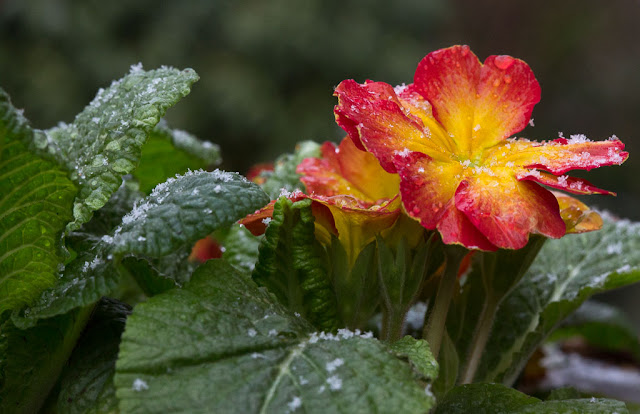 Yesterday was one of those days you'd just really rather not be outside. We got a dusting of snow flurries, which clung to our newly planted primroses, and Olga and I managed to get our morning walk despite the frozen precipitation. (She won't go out in rain, but she doesn't seem to mind snow -- which I can understand.) We walked the black path, which seemed even blacker than usual.

When we got back home I dragged a chair into the kitchen, got out the cream cleaner and cleaned the upper shelves and cabinets -- a job I've been avoiding. That thin layer of kitchen grease just finally got to me. It looks a million times better in there now.

I finished Paul Kanithi's "When Breath Becomes Air," which I enjoyed although it's not exactly a happy book. Kanithi was a neurosurgeon and all-around brilliant guy who fell victim at a young age to cancer -- a cruel irony. Here's a little etymological oddity I gleaned from his book: the word disaster literally means a star coming apart. Dis-Aster. (Actually, the dictionary says it comes from the Latin for "an ill-starred event," which isn't quite the same thing, but I like that image of a disintegrating star.)

Etymological questions are always interesting. The other day I used the term "field day," as in, "So-and-so will have a field day with that." And I got to wondering where that term comes from. Apparently it's an old military term for a day spent in field maneuvers, but its literal meaning is almost never used anymore. Dave and I have questions about this kind of stuff all the time. Language is fascinating! 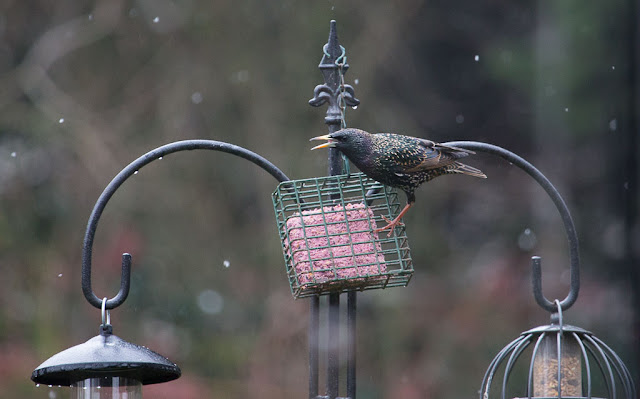 I spent part of the afternoon watching birds at our feeders. We got coal tits, blue tits, pigeons (of course), crows, blackbirds and the starling above. A fairly mundane day. 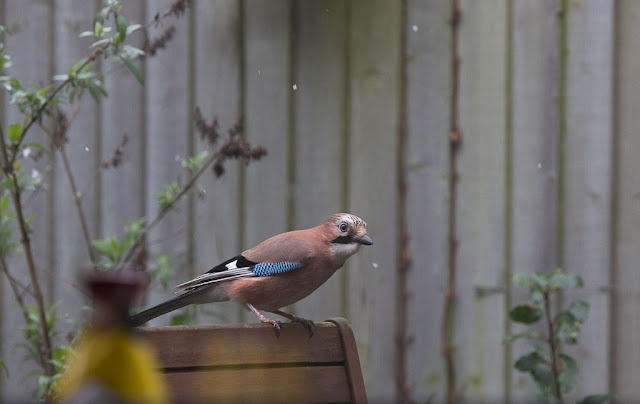 At least, until this Eurasian jay showed up looking for peanuts. I set some out on the table and watched it come and go several times. (Not the best photo -- Juanita was in the way.)

Our "Blind Date with a Book" event on Thursday and Friday seemed to be a hit with the kids. Above was my wrapped book -- some parent volunteers helped with the wrapping, and let's just say this one looked a little rough. Rather than rewrap it and waste the paper, my boss plastered it with stickers to spruce it up. It turned out to be a novel called "Small Acts of Amazing Courage" by Gloria Whelan, and I know nothing about it, but I'll give it a read this week.

(Have I mentioned that we're on February break now? We don't go back to school until a week from tomorrow. Lots of reading time!)

One kid came into the decorated library on Friday, looked at me blankly and asked, "Why are there hearts everywhere?"

"Oh yeah," he said. (This was the same kid who did the freedom survey. Kind of spacey, between you and me.) 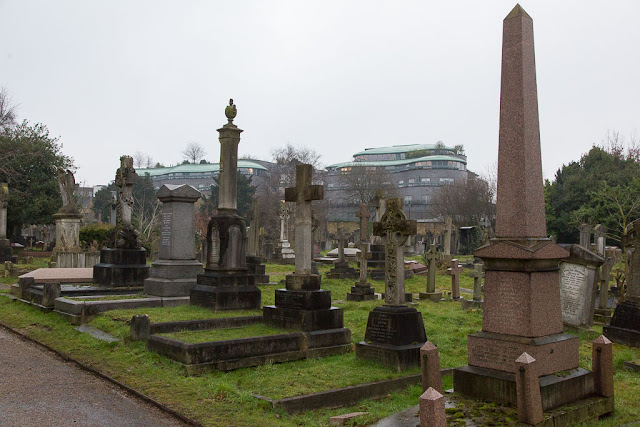 Anyway, back to yesterday -- Olga and I finished the day with a gloomy afternoon walk through the cemetery. It was gloomy to me, anyway -- once again, the dog had a great time and didn't seem put off by the weather at all. She did need a bath when we got home, though.

I've finally finished posting all my photos from our December cruise to Flickr. I already blogged some of them, but if you want to check out the rest they're here.
Posted by Steve Reed at 6:58 AM