Grappling With the Holiday Beast We've had a bit of a cold snap. It's supposed to reach a low of 32º F out there, and the high is only 39º F. It's days like this I'm glad I work indoors -- though those morning dog walks are an endurance test. (Nothing like people in Chicago or Bismarck or Moscow endure, admittedly.)

I mustered the strength and courage to go down to Oxford Street last night after work and do some Christmas shopping. I vowed that if I went I'd treat myself to a glass of wine in the Selfridge's wine bar. Motivation! I didn't buy much -- just a few crucial things for Dave and something for his parents -- and I actually wound up skipping the wine. It was a nice idea but the bars were full and ultimately I didn't want to sit there by myself. 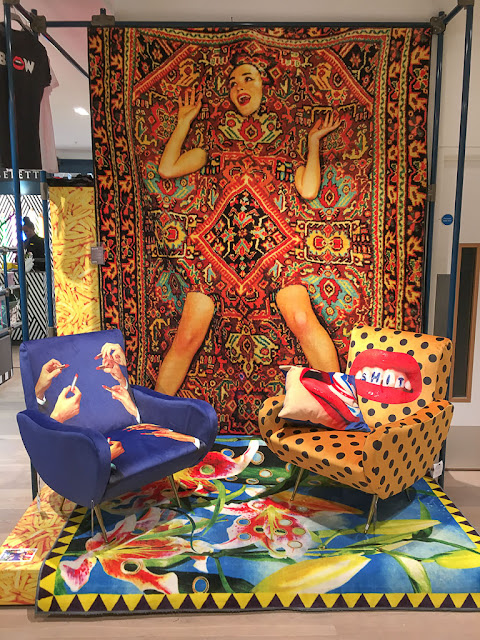 Selfridge's is a bit crazy, but it's definitely my favorite among London department stores. The disco balls were twirling over the escalators, just like last year, accompanied by a grunge rock version of "The First Noel." (Momentarily -- obviously the music kept changing.)

I walked through several levels and when I stepped outside I realized I didn't have my hat. I thought I'd dropped it somewhere and I was super-annoyed, but I walked back through the store to revisit the sales counters where I'd been, and sure enough, there it was in the sock department, waiting for me. (I'm sure the high-fashion Selfridge's crowd wondered what was up with that grubby green beanie from the University of South Florida. Or maybe they thought it was stylishly distressed?)

Anyway, my holiday rage is better now. I even had a bit of fun, lack of wine notwithstanding.

(Top photo: Cones, big and small, in West Hampstead.)
Posted by Steve Reed at 6:17 AM