An Opportunity and a Memory 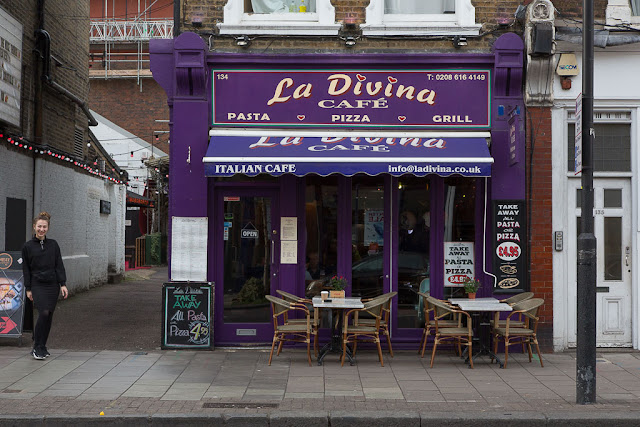 I should have used this picture Thursday for Valentine's Day, given the little hearts on the sign. Frankly, though, I didn't realize it WAS Valentine's Day until the day was about half over. As you may surmise, Dave and I are not very attentive to such things.

When I came home from work that night, I joked, "Where are my roses?" And he replied something unprintable that made me laugh, which was worth more than any roses.

Now we're on February Break, and we have all of next week to ourselves. It comes at a good time, because last week was madness. We had lots of classes in and out of the library for various purposes, and lots of books coming and going -- plus my reorganization of the fiction section.

A position recently opened up at school for a high school journalism teacher. I was asked whether I planned to apply, and I considered it, but ultimately decided against it. It would have been a lot more money, but also a lot more stress, and I have no teaching experience so it would have been a steep learning curve for me -- how to make lesson plans and grade students and that kind of thing. It would have meant overnight travel with student groups, which sounds like my idea of a nightmare, as well as the pressure of appointing the editors of the student paper and overseeing its production. Lots of working nights and weekends, in all likelihood. That's if I'd even gotten the job.

Yes, I have newspaper experience, but it was almost a decade ago. At the end of the day I think the kids are probably better served by someone whose experience is more recent and who knows something about teaching. I've honestly never envisioned myself a teacher. It's not a job that calls to me -- and I think it needs to be a calling for someone to do it well. Besides, Dave and I are lucky enough not to need more money. We're doing fine.

So, yeah. I'm staying put in the library, at least for now. 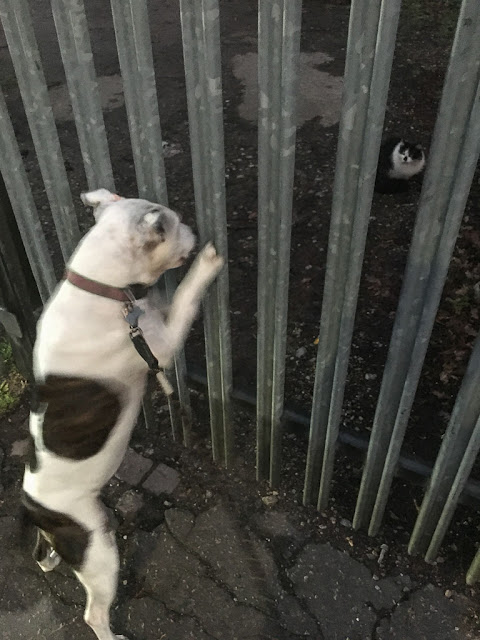 Can you see that cat sitting out of reach beyond the fence, taunting Olga? We pass this cat many mornings on our walk, and that's what it does -- it knows Olga can't get to it. She sure does try, though.

Today would have been my dad's 82nd birthday, if he were still with us. It's also the birthday of Mrs. Kirkland, who took care of me and my brother as children when our parents were at work -- a surrogate grandmother, really. Both of them are gone now but they always come to mind on this day. 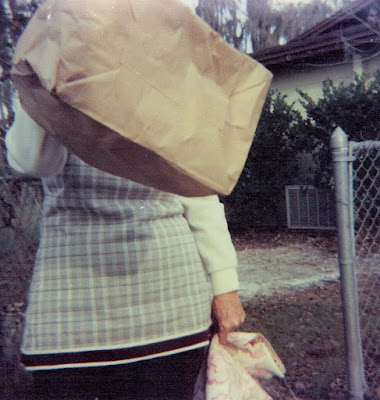 This is my only picture of Mrs. Kirkland. I took it with my Magimatic camera in 1974 or so. She hated having her picture taken, so she held her paper bag of needlework (crocheting, probably) in front of her face.
Posted by Steve Reed at 7:12 AM

It does indeed take a very special human being to be a successful teacher. Someone with integrity, vision, a stalwart outlook, excellent manners, bulging biceps, a keen dress sense and excessive handsomeness.

That picture of Olga and the cat is divine. It tells so much about the relationship between cats and the universe. I love it.

Mr. Pudding forgot to mention that teachers also need to be kind to cats.

I have been thinking the same thing lately, that being a teacher is a calling. I know someone right now who is teaching high school, and she's doing a good job of it, but it was definitely not her dream.

I read the post you did of your dad's passing. He sounds like someone Roger and I would have loved as a neighbor, quiet and smart. Definitely in our denim tribe. May his memory be for a blessing.

I think you would make an excellent teacher but I also think that you are pretty darn satisfied with your life as it is.
Speaking of which, I forgot to say that I hope you and Dave have a great time on your trip to Malta which I know nothing about. Okay. I've just watched a two and a half minute Lonely Planet film on it and now I want to go too! How beautiful!
I can't wait for the pictures.
I think that cat just really wants to be friends with Olga. She tries, every day, and every day Olga misinterprets her actions.
Sad.

I bet you would make a good teacher but I agree, it should be a calling. You seem to do a fantastic job right where you are. Love that photo of the cat taunting Olga.

One of the most pleasant units I ever had for my middle school kids was a journalism unit. We looked at all parts of a newspaper and the writing involved. You get many writing opportunities and best of all a field trip! yes a field trip through a large news paper...The Calgary herald. We collected examples of many daily papers. Each kid who brought a paper got to make a little impromptu presentation. There was also an opportunity to collect papers from all over the world. Pravda! was a biggie. As you can tell I was pumped for this one as it afforded many opportunities for teaching.

if you don't need the extra income and don't have a desire to be a teacher you are wise to keep the status quo. life isn't about how much money you can make.

we don't make a big deal out of Valentine's Day either. in fact the day was half over before either of us mentioned it.

I went back and read about your dad. That was a great tribute, Steve, and I was struck by the resemblance between the two of you in that final picture. I don't think we ever forget our dads.

Oh, was it Valentines day? Missed it. Now chocolate will be 50% off, not a bad thing. The lure of a better paycheck does not outweigh the demands of being teacher- you are a wise one- you would have been cranky every day and the students would take advantage of your good nature, because that is what they do.Anyway, You would be a terrific teacher I think...just overworked and cranky.

I would be a TERRIBLE teacher. And your current job is just my cup of tea. Based on that alone, you were right not to pursue the opportunity. Ha!

It's a wise person who understands that every opportunity isn't necessarily an opportunity.
Can't you just hear all the popular psychology -- "Oh, step outside of your comfort zone!" Pfft. Does anyone think for themselves anymore?
My hubby came home from a hard day's work, several hours of it out in the extreme Saskatchewan cold we've had for weeks, and thanked me for supper. My reply: "Thanks for the flowers and chocolates," which he hadn't brought. He immediately looked caught out till I said "Just kidding." As if flowers would make it from store to vehicle to house in this weather anyway. And really, who needs more chocolate? There will always be more days, more chocolate.
-Kate

I like your posts where you reminisce or disclose

Sounds like you made the best choice for you. The service professions, I feel, really should be more of a calling. And trading extra time for extra money? That can get old really fast, when it's not under a person's direct control.

The picture of Mrs. Kirkland cracks me up a little :) I have one picture of my wonderful elementary school teacher, and all you can see is the reflection of light on her glasses (she was at the side of the photo of a classroom of kids) - yet I keep it because it's all I have of her.

I remember your post about your dad at the time he passed away - an honest and gentle reflection on him.

I, too, went back and read the post about your father - for the first time. What a thoughtful tribute. Losing a parent leaves such a gap in our being.

Good for you for knowing yourself well enough not to go after a position just for the big bucks! There's a lot to say for being content in your life. I went back to school and got my teaching certificate when my daughter was little and I was a single mom. I had no real calling to be a teacher. But I did want to see as much of my daughter as possible, and working those hours, having the same school vacations and summers off was perfect. What a great surprise that I loved teaching!

Birthdays of loved ones no longer with us are poignant times. It doesn't get any less so with years I have found. And I'm with you, classroom teaching IS a calling. I can think of few jobs more exhausting. But that's because it's not my calling I suppose.