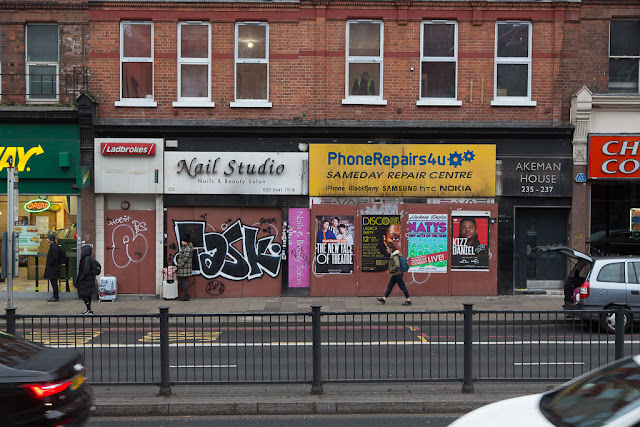 These are the shops on Finchley Road that were severely damaged in a fire more than three years ago. They still haven't reopened, but the scaffolding has been gone from the building for several months and it looks like the upstairs renovations are proceeding. The electricity's on, and you can see a workman in one of the center windows. (This photo was taken Jan. 10, so things may be slightly farther along by now.)

I'm guessing it takes a long time to get things like insurance sorted out after a disaster like that. Still, more than three years?

Our back-garden fox (apparently) ate the deboned chicken I put out on Sunday. I also put out some slightly overripe pineapple, thinking a critter might eat that, too. But the pineapple has had no takers. I guess it doesn't really fit into the ecosystem here, does it? After all, few things are more foreign to England than a pineapple -- especially in winter.

I read a terrific book yesterday -- "Sabrina," a graphic novel by Nick Drnaso. The New Yorker recently did an article about Drnaso, prompting me to buy both his books for the library. I'm not a huge fan of graphic novels but I could not put this book down. It's about a murder and the ripple effect the crime has on people who knew the victim and, subsequently, on society as a whole, thanks to the Internet and our conspiracy-theory-prone culture. Drnaso has a very minimalist drawing style that suits his spare but emotionally involving storytelling. His earlier book, "Beverly," is also good, and almost as compulsively readable as "Sabrina." (It's slightly more problematic for our school library from a maturity point of view, containing both sex and graphic violence -- we put a "Grade 11+" sticker on it. I think any high schooler could read "Sabrina," though.)
Posted by Steve Reed at 6:35 AM

Insurance claims can take that long...any excuse not to pay out with some companies

Who cares if any high school students borrow "Sabrina"? After all, it's the librarians that matter in a school library. Why not order more stuff for yourself on the school library's account? It could save you a lot of money. As for writing "same day" as one word...no wonder that shop was firebombed.

I read that article too! It was interesting but I don't think I'd read the book. But maybe I should?

You made me think of the pineapple song from "Cabaret". Three years does seem like a long time to rebuild but, I bet there were a lot of hoops to go through.

I remember being on a committee to choose books for middle school kids. It's a tough call. That reminds me that I read a lot of junior fiction.

I too noticed "sameday" and thought it was perhaps based on the spelling of "everyday"? I'm glad English is my native language and one I didn't have to learn as an adult!

Odd to see a Subway sandwich sign at the left of your photo--I think of them as so American.

A friend's fox terrier loves all fruit, but then, a fox is not a fox terrier!

You remind me I've been meaning to read Sabrina! I love graphic novels and was excited to see Sabrina was up for a Booker prize last year--the 1st graphic novel longlisted. I remember when Art Spiegelman's "Maus" (about the Holocaust, you know) first appeared and many adults wondered about this strange new form. Started at the bottom, now it's here. :)

Would I be correct in assuming the upstairs rooms are apartments, or possibly a hotel? I see the sign for Akeman House to the right and it appears to be opening to a stairway.

You remind me of the times when the coyotes would come into our yard and eat the fallen fruit from our little apple and pear orchard. And when the fruit was gone from the ground, they would literally climb the tree for more. Maybe pineapple is just not canine fare.

I wouldn't know about insurance as we don't and haven't had any. I do hear that the insurance companies will fight tooth and nail to NOT pay a claim. have not heard of this graphic novel.

Maybe construction took so long partly because of a shortage of labour. If there's no one for hire, or they have a long list of customers, things can drag on.

Wow, your review of Sabrina makes me want to pick it up immediately. I don't usually read graphic novels either though Persepolis by Marjane Satrapi was impossible to put down, too.

Just read a good article about Nick Drnaso, creator of "Sabrina", in the New Yorker---maybe you've seen it, but if not, it's here:
https://www.newyorker.com/magazine/2019/01/21/the-bleak-brilliance-of-nick-drnasos-graphic-novels
--Frex = Fresca