Flowers, Exotic and Not 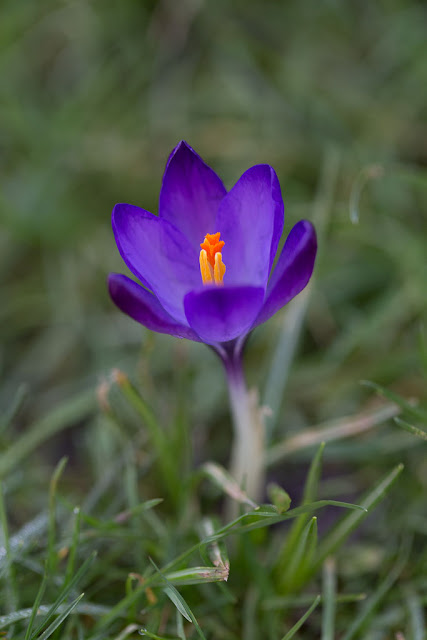 I was just saying to Dave the other day, "Don't we usually have a purple crocus in the garden?" And then, as if summoned forth by my words, it bloomed in the grass days later! It was promptly plucked by a pigeon, but fortunately I got a photo first. 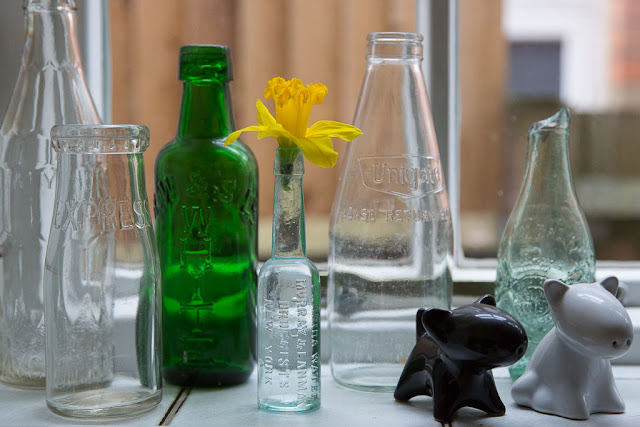 Our daffodils have also appeared, and Olga, on cue, has begun knocking the heads off with her garden escapades. It's an annual ritual. 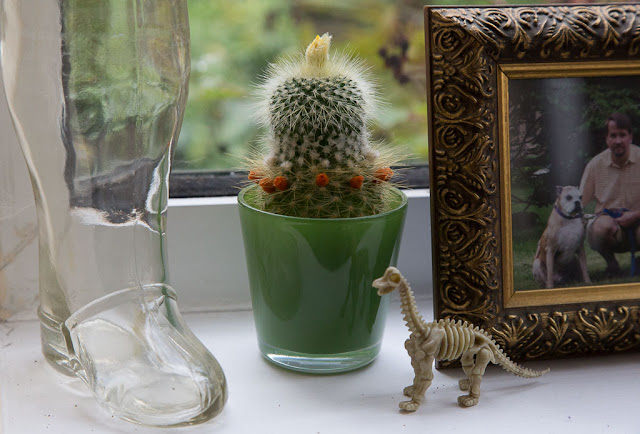 I bought this little cactus years ago for Dave. At the time, that ring of tiny orange flowers circled the top. Since then it's been steadily growing in its misshapen, cactusy way, and now it's sent up what looks like a large yellow bud. I think we may get a proper flower!

The orange things, it turns out, are almost certainly fake. Apparently this is a thing. The mere fact that they've been there for years suggests that they are not natural. I guess, deep down, I suspected as much. 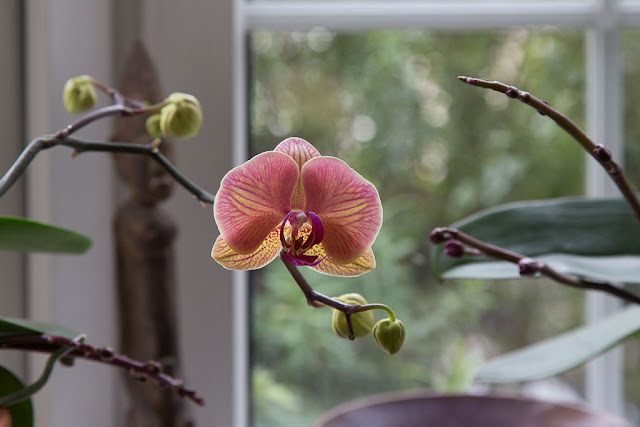 Finally, here's one of our orchids, blooming once again. You can see flower stalks from two other orchid plants in the background. Give us another month or so and we should have orchids galore around here!

Speaking of gardening, we had some drama yesterday. Dave and I were sitting in the living room when Dave exclaimed and pointed to a guy walking around in the back garden! He turned out to be a gardener from next door. The neighbor (the one who took down the big cypress tree) is having her landscaping redone and asked the gardener to bring her climbing rose back over the fence so she could put it on a trellis at the back of her property. Until now, it's been winding its way through a tree in our garden -- you may remember we had our tree trimmers spare it during our recent pruning. It is indeed her rose, because it's rooted in her garden, so we couldn't really argue with them to leave it alone.

I'm concerned that the gardeners' work may have damaged the greenery in our trees -- much of it ivy. If that ivy was rooted on the neighbor's property, and they cut the vines at the base, all that green growth will die and that will look like hell. There's still some climbing rose up there, now deprived of its roots, that will certainly die. Ugh -- we may have to have the tree trimmers back again! Only time will tell.

But anyway, for the time being, I'm not going to think about any of that. Because this morning, we're off to Malta!
Posted by Steve Reed at 6:08 AM

It must be the time of year for orchids to flower. I have 3 just starting and another 3 have been going for several months.....I love them. I got a superb one a few weeks ago from M&S........half price at £8, complete with a ceramic pot . 8 huge flowers and at least another 8 to come. (White with wondrous purple blotches and lines )

I would have been very annoyed about that gardener suddenly appearing on my property and I would have gone out and challenged him. He should have knocked on your door for permission or the neighbour should have forewarned you. Have fun in Malta! Watch out for the bird shooters!

Beautiful photos! Thank you for letting me experience Spring vicariously! Your table arrangements are so sweet -- loving the salt and pepper shakers in the daffodil photo. Have a wonderful time in Malta! Can't wait to see your Malta photos.

pretty orchid and yes those orange thingies are fake.

Have a great time!

I wish I had your cleaning/tidying determination. Your house always looks so nice.
How dare they fool us with fake cactus flowers? That's so wrong.
My orchids never bloom. As I've said before, they don't die, they don't bloom.
Have a wonderful time in Malta! Take many pictures.

Have a great trip.

Your crocus is beautiful. I'm glad you got a photo before the pigeons got it. I hope you get to see that cactus bloom. They don't last very long. Have a great time on your trip. I'll look forward to the pictures. I once knew someone (years ago) who lived in Malta and Eric Tenin, the guy from Paris who started the whole "City Daily Photo Blog" group moved there several years ago. If you run into him, tell him I said "Hi". I'm kidding of course.

Beautiful flowers you have blooming there. Ah spring! Enjoy your journey to Malta. I'm already looking forward to your photographs.

What a delicate and beautiful purple flower. And maybe it's time to plant your own climbing rose bush. You are patient gardeners, waiting for orchids to bloom a second time. That is a beautiful orchid, too, and worth the wait.

Have a great trip! I hope you are back in time to see the cactus bloom!

It seems like since you've been hosting the ivy and the rose, the owner should have discussed what she was doing with you first! It would be the neighborly thing to do. Love your little cactus. I have them surrounding my little table of houseplants to keep the cats away. Have a wonderful vacation!

Frances: It's amazing how inexpensive they can be! I think they DO come into flower in the winter, but I have no idea why that is. Maybe they're starved for sunlight and think they're going to die, so they put all their energy into flowering?

YP: Absolutely! We WERE annoyed. The guy CLIMBED OVER OUR FENCE. I tried to go talk to the neighbor but she was away.

Joanne: We got those shakers in Brussels, at the train station of all places!

Ellen: Well, I wish you'd told me that years ago! LOL! Seriously, I'm going to pull them out. Apparently it won't hurt the cactus to remove them and they clash with the REAL flower.

Ms Moon: I only show you the tidy parts!

Sharon: I think it's still several days away from blooming, so we should see it. Fingers crossed! Malta would be a very unusual place to move to.

Robin: That's exactly how I feel -- "Ah, spring!" Of course, it may be premature.

37P: Yeah, that's always an option, I suppose. If all the vines die back in that corner where the gardeners were working, we may just pull it all out. It will expose the tree beneath to more sunlight but will probably also expose US to the neighbors, which I've been trying to avoid. The vines are nice for privacy.

Briony: Thanks! So glad to see you back in blogland!

Jenny-O: I KNOW! There oughta be a law! (I'm surprised there's not, actually, given the EU's reputation for over-regulation.)

Sue: I completely agree. It was the surprise that threw me more than anything. (And the fact that the guy was IN OUR GARDEN!) If the neighbor had knocked and simply warned me, I wouldn't have resisted -- it's her plant, after all. It just seemed sneaky.