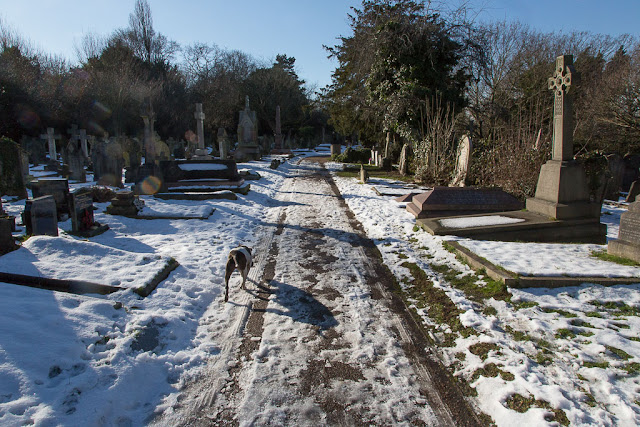 I took Olga to the cemetery yesterday afternoon. She had an opportunity to romp in the dwindling snow, nibbling at it along the way, and when she chased her Kong she kicked up crazy sprays of white. Unfortunately I think that's going to be the last of our Winter Wonderland for a while -- all this week we're supposed to have temperatures in the 40's and 50's with rain.

I've moved the fig back outside, so it can benefit from the precipitation (and we can get out the back door again).

Yesterday morning we had a vulpine visitor: 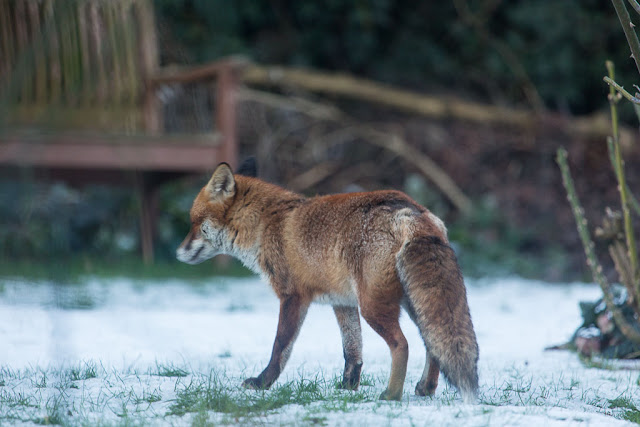 That was the best shot I could get, just as she turned away and began trotting toward the back garden wall. Doesn't she have a beautiful coat? So many foxes look scraggly, but she's quite plush. I'm sitting here with my camera in case she comes back today.

Yesterday morning, on her walk, Olga found a couple of pieces of chicken in a box from a restaurant, sitting on a bench near the bus stop. It was cold and had clearly been there several hours, at least. I didn't let her have it (bones) but I brought it home and took it off the bone and put the meat in the back garden for the fox. We've had to keep Olga out of the garden so she won't eat it, but she did get a few de-boned bits as a reward.

Dave and I went to see "Vice" yesterday, the darkly humorous movie about Dick Cheney. The performances were great and the make-up was amazing -- all the actors so convincingly embodied their characters. I find it very hard to laugh at anything Cheney-related. I'm convinced the guy is basically Satan. He and his cabal of supporters brought death and misery to hundreds of thousands of people. But the movie does manage to simultaneously highlight the absurdity of the Bush II White House and the tragedy of the decisions made there.
Posted by Steve Reed at 6:35 AM

Amazing photograph of that beautiful fox! I would faint if something so rare and wonderful trotted through my life. Thank you for feeding the foxes. It's their London, too.

I am not sure that chicken bones are really a threat to dogs. I guess they could be.
That fox is absolutely gorgeous and if given a chance, could get rid of your mouse problem should it ever arise again.

I think that's so cool that you have foxes. Cheney is truly evil. He had his Iraq invasion plans for years prior to the invasion. Bush 2 was the only president he could talk into it.

What a beautiful fox. Very kind of you to de-bone the chicken and leave it out for her. You're the best neighbor!

If you get through this week with good temps , you're over your winter...maybe!

That's a beautiful photo of the fox. I've been thinking about seeing the movie Vice but, haven't made up my mind yet. I agree with your perception of Cheney. I'm not sure how anyone could think he was a good man including his daughter who is now serving in congress.

That’s a very healthy-looking fox! The ones in Northern Wisconsin are scrawny, skinny things. I think they have a hard time surviving the elements and the highways. I’d share a photo with you (if I knew how), of fox tracks in the snow on a frozen lake one morning at dawn three years ago...it was amazing! They must have had some kind of kill, or feast, and the designs of paw prints on the snow all coalesced into a nucleaus area in the middle, very pretty design work! Nature is very beautiful, if you look beyond the gruesomeness/need to survive. I would put out meat for them, but the neighbor advised against it due to the bears in the area; we don’t need to draw them near to the homes.

Your weather sounds just like mine. I love that beautiful fox picture. Around here all I have ever seen are coyotes, fairly rarely.

Also, I would love to walk the dogs through that cemetery, it is lovely! I actually enjoy cemeteries for that because it’s so interesting to read the headstones. At least over there; the US ones are mostly newer and have so much less character. Again, it’s nice to take these little virtual jaunts along with you and Olga!

That fox is gorgeous! So fluffy!

What a beautiful fox! Looks so healthy and the tail is magnificent. I didn't know there were fox right in the city of London. We have some of their country cousins visit us every so often.

That fox IS healthy looking. I'm glad you made use of that left-behind chicken and I'll bet Olga enjoyed her morsels :)

YP: You're so diligent. I hope I'm not THAT much of an obligation.

Vivian: They always amaze me, even though they're fairly common. It just seems so exotic to have them wandering around in our garden!

Ms Moon: I always heard cooked chicken bones are dangerous because they can splinter. But raw ones, supposedly, won't hurt them. I have no idea whether this is really true.

Ellen: The movie addresses that -- Cheney's plan to invade Iraq long before 9/11.

Robin: Isn't she beautiful? Makes me want to buy chicken for her every day!

Red: That's true! I'm scared to hope for it!

Sharon: It's a pretty good movie. I'd recommend it, even given your ambivalence!

Still Water: I think wild foxes have tough lives. The ones in London supposedly live only a couple of years. I think cars get a lot of them. And YES, cemeteries in London are fascinating!

Catalyst: Coyotes are the foxes of Arizona, I suppose! The same niche in the ecosystem...

Sue: We have lots of foxes in central London. They're a fairly common sight. Supposedly one was once found sleeping on top of a filing cabinet in Parliament!

Jenny-O: YES, I think Cheney is out of the picture. His health has been so bad I can't imagine him coming back yet again!

Steve, WHY are you putting out food for the foxes and squirrels? You are a better human than me.