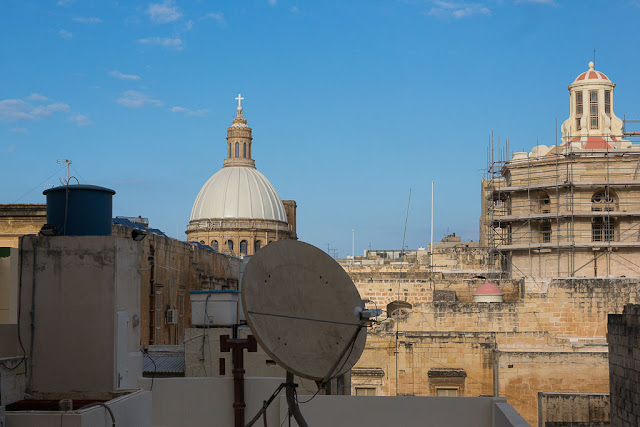 Well, we made it to Malta, after what Dave pronounced the worst flight of his life. I would estimate there were at least 80 babies on our plane. (There may have been only about eight, but it's a mathematical law that every baby on land produces the noise and bodily fluids of at least ten babies once it takes to the air.) The family sitting next to us had two babies, which they stuffed with Cheetos until the kids' eyes bugged out, and Dave said one of them had smelly gastrointestinal issue on its clothing, which the parents decided to simply ignore. They were too busy being vexed and belligerent with the flight attendant, who had insisted that they put their stroller in the cargo hold. It was quite a show.

But anyway, we got here!

Above is the view from our third-floor hotel room balcony. I could do without the satellite dish, but I think it's on the roof of the French embassy, which makes it somewhat more romantic. All of Valletta, the Maltese capital, is built from that beige stone. 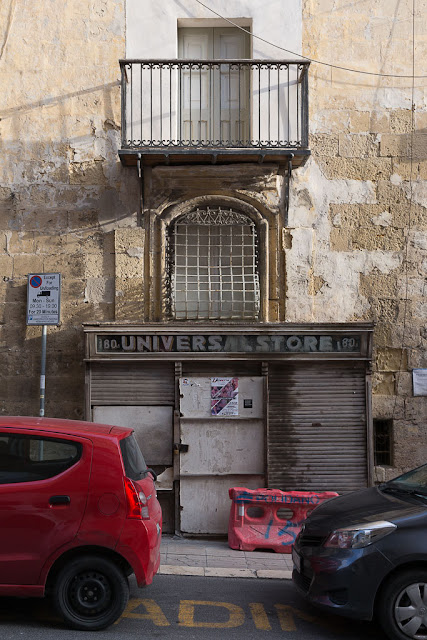 Our hotel is called La Falconeria. Apparently actual Maltese falcons -- a subspecies of peregrines -- haven't been seen in the wild since the 1980s. But that doesn't stop the falcon from featuring prominently in the islands' mythology.

Dave and I went out for a midday meal and found a terrific pasta place on a sloping street, where the cafe tables had longer legs on one side than the other to accommodate the slope. I'd never seen anything like it. The food was fabulous. 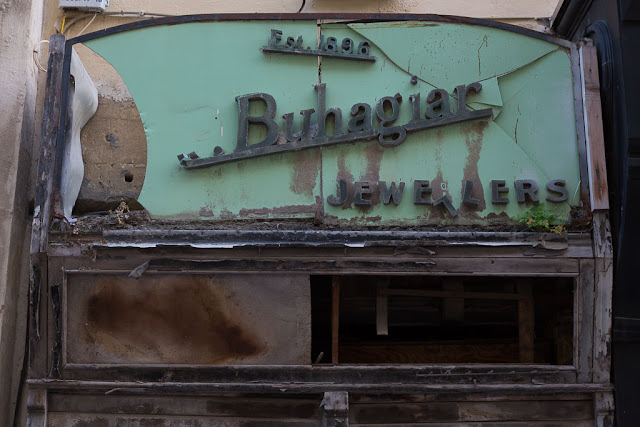 A lot of the shops have signs that seem to be at least a half-century old. I'm going to have fun photographing shopfronts, I can tell! (This particular shop appears to be vacant. Apparently it's looked this way for more than ten years.) 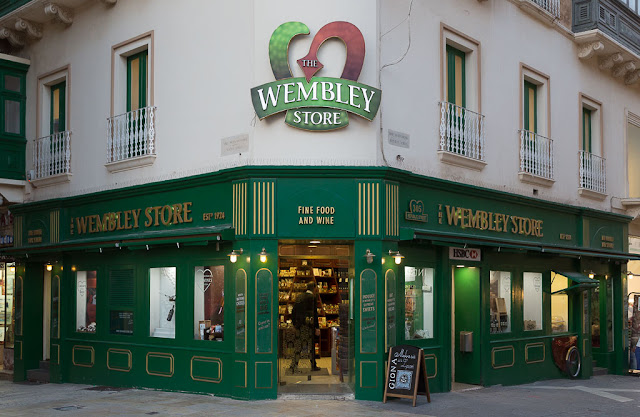 There are plenty of modern shops, too. And since Malta was a British possession in the 19th and 20th centuries, there's lots of British iconography. 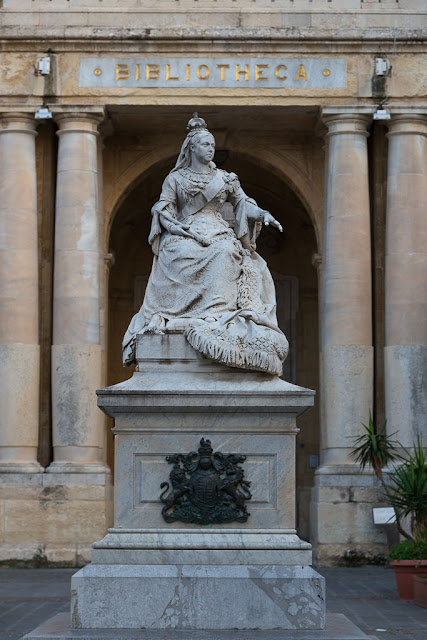 In fact, Queen Victoria still reigns in front of the National Library. 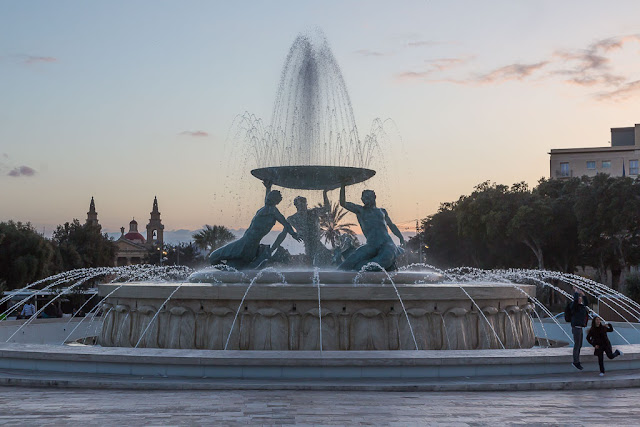 After walking around town, past the sleek modern Parliament building and the city walls, Dave and I wound up on this wide plaza with a gigantic fountain. The sun was setting and it was getting cold, so we went back to the room for our jackets -- and I'm ashamed to say we stayed in the rest of the night. So much for being adventurous! I think all those babies just wore us out. We'll make up for it today.
Posted by Steve Reed at 6:08 AM

Ah, you scored the Screaming Babies flight to Malta. And what were those parents going to do with the stroller in the plane cabin? Run the children up and down the aisle? Never mind, it could have been worse, at least Dave didn't mislay his computer!
The satellite dish is front and centre in the view from the window but there will be hundreds of other fabulous photo opportunities, if the photos in the post are anything to go by.
You are sure to have a wonderful few days.
Alphie

When in Malta one must always munch "Maltesers". Have a nice day or as they say in Malta -
Il-ġurnata t-tajba!

Babies have to get from one place to another too, I suppose. It can be a miserable experience for all concerned.
Malta looks so exotic! I'm so glad you're there so that you can give us a taste of it.
Don't forget- pictures of food! Please! And the adapted table sounds so very sensible and yet- how odd!

Quite a mix of old and new and history.

I had to google Malta. I had no idea where it was, besides Europe. I feel sorry for babies and parents on planes. the babies don't know what's going on, why their ears hurt, and the poor parents getting the stink eye from everyone. but 8 babies on one plane? OMG. the attendants should have passed ear plugs out to everyone. so about the tables with uneven legs...what about the chairs?

I must say, that does sound like the flight from hell. I also can't believe that sign on that vacant store hasn't changed in over 10 years. Amazing. I hope you are out having fun today.

URG, the baby plane. Miserable for everyone. Glad you made it, lucky it was a quick plane ride. Looks interesting so far! You will find the most photographical stuff I am sure. Have a great time ! Happy break!

Bummer about the baby-plane ride, but it does look like Malta is grand place to spend a few days exploring. I'm going to have to read a bit of its history, and find out why there was a movie called the Maltese Falcon. Enjoy the journey!

You know, the next time I fly I'm going to try to remember earplugs because crying babies drive me crazy (even though as Ellen says, I can sympathize with them). Can't wait to hear all about your adventures!

I would love to holiday in Malta one day. Your pictures already show it as an exotic and interesting destination. If you show us enough of your photos, I may just be inspired to actually visit! However, I need to persuade my husband (who is also both the holiday planner and the travel agent of our family). Pictures will help.

Keep an eye out for Kasper Gutman or his little henchman, Joel Cairo. In the event of trouble put in a call for Spade. Sam Spade.

Looks like you found some nice spots already...nice photos.

The sky is beautiful, both in the first and the last photos. Looks like a wonderful place to explore. Enjoy!

The kids in midair on the right of the fountain picture add an extra cool quotient to that already very cool photo.

Alphie: Yeah, you can bet we kept a close eye on that computer bag! LOL!

YP: The Maltese language, known as Malti, is very peculiar. Lots of M's and X's and other letters we don't even have in English. Dave has been making that Maltesers joke for weeks!

Ms Moon: Do they, though? I don't think my parents would have taken me on an international holiday when I was that age. But of course the world is different now. I think I was more offended by the behavior of the parents than anything the babies themselves did. They can't really help it, after all.

Red: Lots and LOTS of history!

Ellen: It was a LOT of babies. Definitely more than I have ever had on one flight.

Sharon: And that store is right on the main shopping street, not far from the Parliament buildings! You'd think it would be prime real estate!

Robin: Yeah, I can't remember why the movie was called that. Wasn't there a figurine of a falcon, or was it just some kind of metaphor?

Bug: On this flight, you'd have needed nose plugs too! LOL

David: I had to persuade Dave to go for this trip. It's never been high on his list. But it's such a curious little country and a crossroads of various civilizations!

Catalyst: Do you have his number? Maybe I can sic him on our airline for a refund.

Sue: We definitely have more sunlight here than in England, which helps!