Mdina, Coleridge and a Neolithic Woman 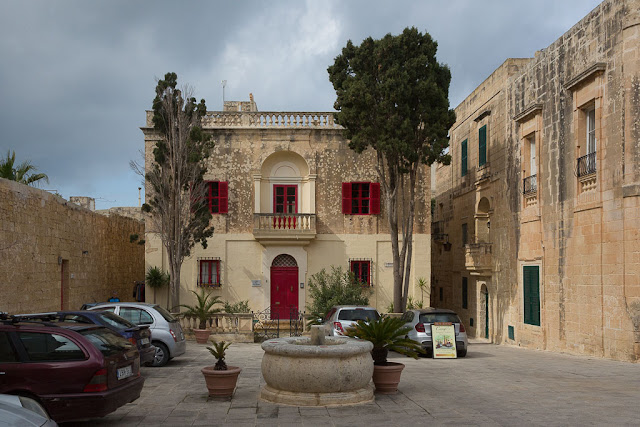 Yesterday morning Dave and I figured out the public buses -- it wasn't hard -- and took one to the town of Mdina, which is located on a hill in the center of Malta. It's an ancient city built on the site of Phoenician fortifications from 1,000 BC. The Arabs, who arrived in the 9th century after a period of Roman occupation, gave it its present name as well as its strong walls and deep dry moat.

On the bus we were seated near an evidently carsick boy who threw up into his baseball cap, prompting a lot of scrambling by his parents and other passengers for tissues. Poor kid! Mercifully the ride is pretty short.

Once in the town, Dave and I wandered the narrow streets lined with medieval buildings and had coffee at a rooftop terrace overlooking the countryside. This was the view, looking north toward St. Julian's: 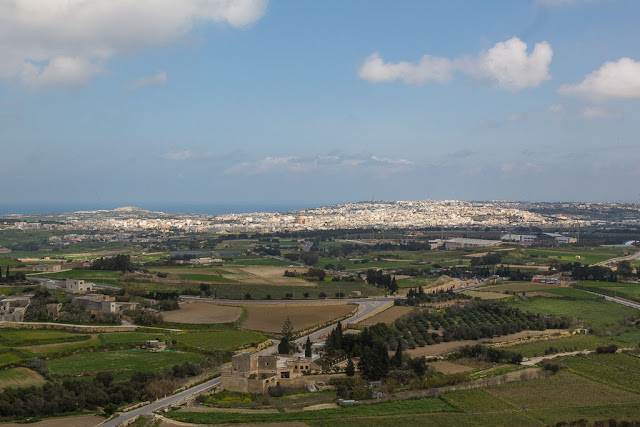 All the guides say Mdina is a must-see, but I found it preternaturally clean and quiet and somewhat sterile. I didn't see any food stores or drug stores or any sign of everyday life -- all that seems to occur in the surrounding modern town of Rabat. Mdina was just tour groups and upscale souvenir shops and art galleries. 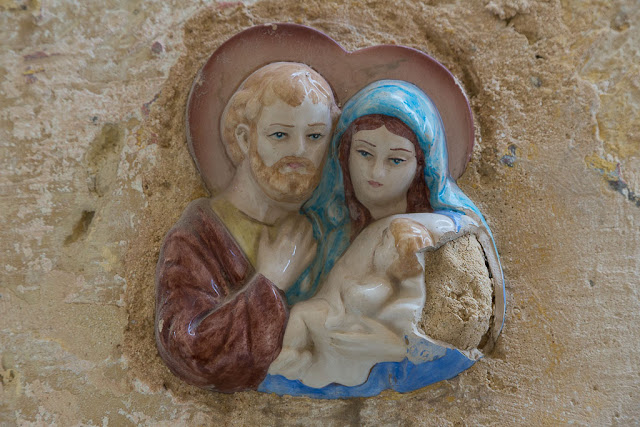 Of course there were plenty of houses, with the typical Catholic plaques beside the front doors, but was anyone living there? Or are they all Airbnbs?

Don't get me wrong -- it was pretty. It was just too darn quiet. 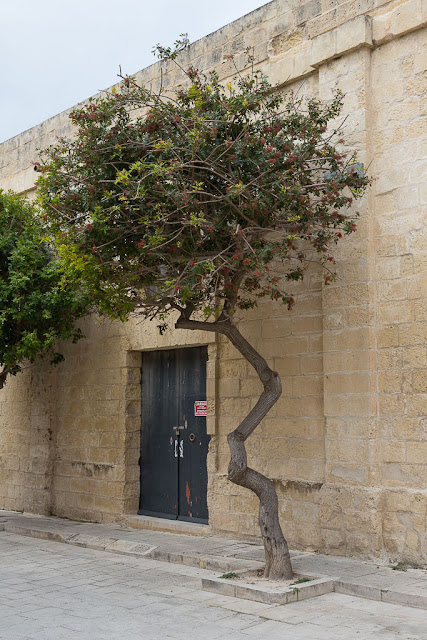 This tree amused me because I'm pretty sure it's a Brazilian pepper. In Florida, they're a scourge -- an invasive species and the subject of eradication efforts by the state. Maybe here they don't grow as wildly. Or maybe I'm wrong and it's just something that looks like a Brazilian pepper -- but I don't think so. 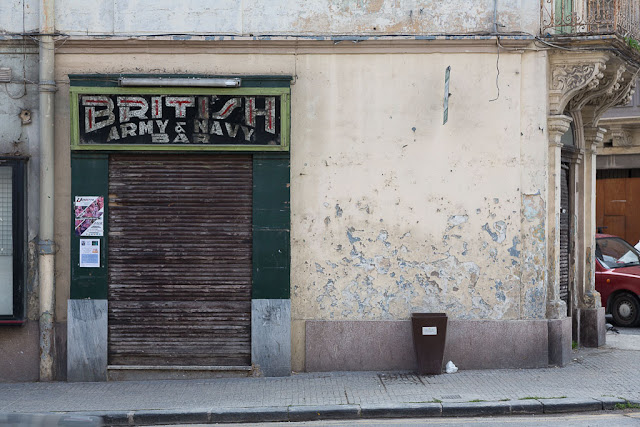 When we got back to Valletta I was so ready to soak up some urban grit. So I got off the bus early while Dave went back to the hotel and I strolled through some outlying neighborhoods, where I found lots of cool shops and stray cats.

I got a tuna sandwich at a little open-air cafe, and of course the minute I sat down the pigeons began coming around. I tried to feed a few of the sorriest-looking ones, but I've found that if you try to throw a crumb to a sorry-looking pigeon, a healthy pigeon barges in like a linebacker and seizes the food. (Which explains everything, right?) I did manage to get at least one crumb into all the sad-looking birds. 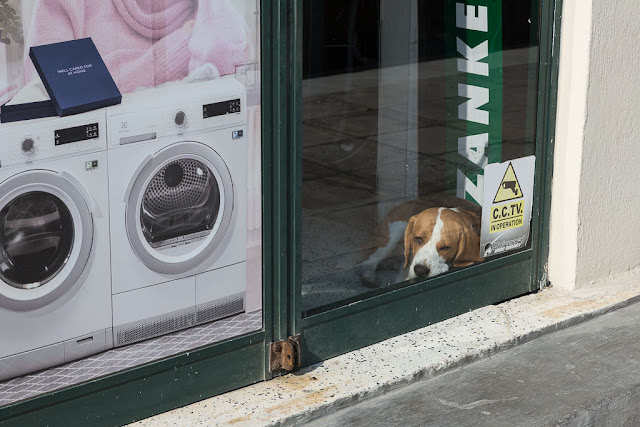 This very fierce guard dog was curled up in the sun on the floor of an appliance shop.

I walked through the city gate and back into central Valletta, where I had coffee in the square outside the National Library, beneath the gaze of Queen Victoria. 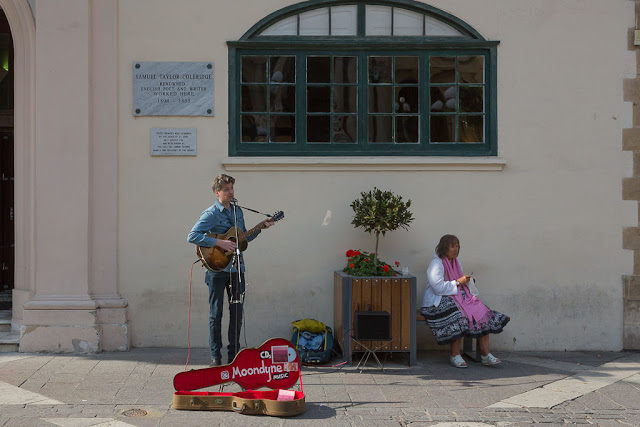 I listened to this busker, who was playing much of the Peter, Paul and Mary songbook. He's standing next to a plaque proclaiming that Samuel Taylor Coleridge worked in that building in the early 1800s.  Apparently Coleridge lived here for a few years, becoming increasingly addicted to opium, after the British took control of Malta from Napoleon. 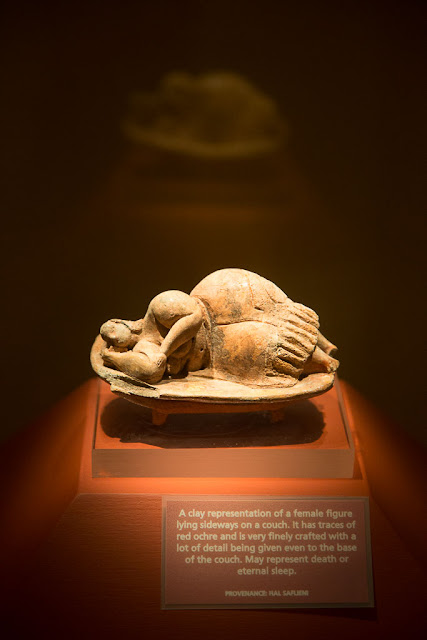 But if we're going to talk about history, let's go WAY back. After coffee I went to the archaeology museum. Malta is full of ancient temple complexes and other remarkable ruins, and since we aren't going to go to any of the sites on this trip, I wanted to at least see some of the artifacts found there. This statue of a sleeping woman is 5,000 years old! Just think -- it was already 3,000 years old when Jesus was preaching in Jerusalem. Doesn't it look like something by Fernando Botero?

Last night Dave and I went to dinner at a little bistro called Guze where we tried to eat light. I had a pot of mussels and Dave had rabbit, a Maltese specialty. Today we're headed back to London!
Posted by Steve Reed at 6:42 AM

I have enjoyed your photos. Never been to Malta but my husband went once with a cricket club tour..they played about 3 games there I think! Safe journey home. x

Again, enjoying the pictures and the fascinating journal of your travels. Just too bad that your visit is so short. Sounds like you need a couple of weeks in Malta, if not more! Thank you.

A Maltese kid was wearing a baseball cap? Which team? Oh, wait -- I'm sure it was the Yankees.

Thank you for taking us on this trip. I loved the picture of the fierce dog.

You're such an urban dweller! Ha! Love that view in the second picture - I would want to go wander off into it...

The Sleeping Woman...
Oh!
That just calls to me. It is so very, very human. After a tiny bit of googling I am even more intrigued. Thank you for sharing her with us.

I'd guess the Brazilian pepper tree isn't a problem there because there's no dirt for it to spread. Portugal was like that, so clean, but not at all sterile with all the gardens in front of people's homes and lots of people out living their lives. I'd definitely be visiting the archeological sites.

To get out into the town is the best way to see things and get an idea of how people live. You also soak up a lot of history on your tours.

Another set of great photos and travel stories. I love that building in the top photo and the view is spectacular. That little statue of the woman is mind boggling as much as it is beautiful. There is so much history in this small country. It seems like so many different cultures have had a go at ruling the small island.

There is something about seeing art that is 5000 years old that really gives an interesting perspective about time and our human presence on earth. Love seeing these photos. Have a safe journey home.

Your trip to Malta was very educational to me. I had never thought of it as a place to go but now I think I'd like to live there!

Looks so much like Sicily, where my father's family comes from.
I mean, obviously---they're only a hop, skip, and a jump apart, (oh, and Malta was once part of the Kingdom of Sicily--I didn't know that);
but I comment to say I loved seeing the photos which reminded me of time spent in Sicily--I loved the grungy parts and found the cleaned up tourist bits too sterile.

The huge diff is Sicily has nothing British about it! My father always said we were related to everyone in the world, because everyone conquered or came through Sicily--
. . . but it seems the Brits kept to Malta?
Boy there's tangled up, twisty history in that bit of the Mediterranean!

Anyway--thanks for the vicarious trip!

Love all the pictures - they're all so different. A taster menu!

My Corner of the world said...

Thanks for sharing the photo's, very nice! I enjoy reading your blog especially while you are traveling!

I wonder what the woman sitting behind the busker is/was doing? Knitting?

I must disagree with your description of the dog in the doorway. To me it looks rather placid and sleepy. You have had a good taste of Malta -I wonder if you will be back.

I've just been catching up on your adventures in Malta. Sounds like the perfect place... if you want a bit of quiet! :-)

Frances: It's definitely a good place for a short visit. We could have used another day or two.

David: Yeah. we could have used a little more time to see the archaeological sites, more of the coastline and maybe go to Gozo, a smaller island nearby. But oh well -- we can always go back!

Vivian: Actually, I think he was a tourist kid, not a Maltese one!

Bug: I really am a city person. I can find anything anywhere to photograph, but I love cities.

Ms Moon: Isn't it amazing? So modern despite its antiquity. I'm glad it inspired some additional Googling!

Ellen: Actually, apparently Brazilian pepper is a bit of a problem in Malta, too, from what I read online. But I guess it's not SO bad that you can't grow them ornamentally.

Red: I always find I learn more about a culture by riding public transport than anything else. I love getting on buses and trains and seeing the sights.

Sharon: Yes! That's one reason I wanted to come to Malta -- it's a crossroads of various civilizations.

Robin: It's mind-boggling, isn't it? What would the artist who created that sleeping woman say if he/she had known it would survive for 5,000 years and inspire people far into the future?

Fresca: Yeah, I think the cultures in Sicily and Malta are quite closely related. There are a lot of Italian-sounding names and the people certainly LOOK Sicilian. But the British anglicized Malta, so everything is in English.

Drita: Thanks for the kind words! More travel to come! :)

Sabine: I think she was eating an ice cream and holding a napkin.

YP: You clearly don't recognize ferocity and bloodthirstiness when you see it.

Cuban: Most of the island isn't that quiet, actually. Just Mdina. Which is what I didn't like about it!