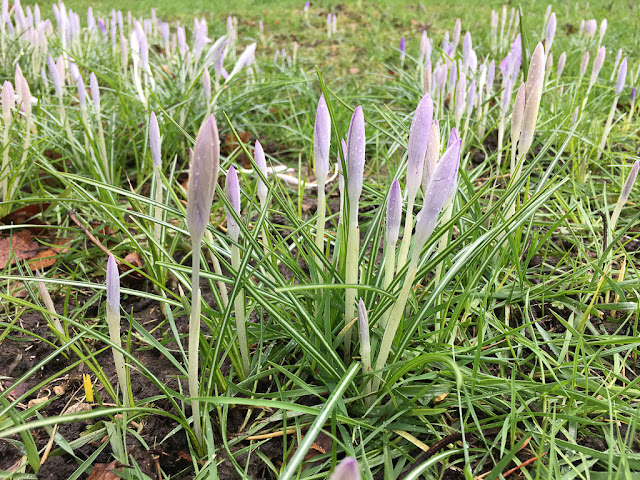 I know, I just did a random photo post a couple of days ago. But I have nothing to write about today, because, believe me, you don't want to hear about my cultural competency training. Plus I have lots of photos stacked up. So here goes!

First, signs of spring -- I mentioned the other day that the crocuses were coming up. These were in Hampstead Cemetery. 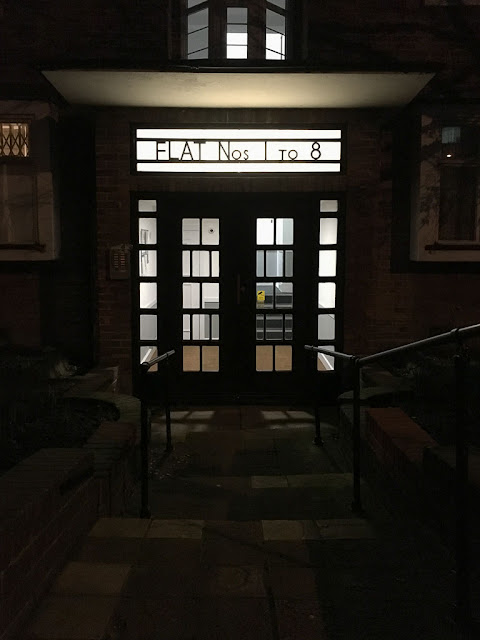 This is a block of flats on my walk to work. The entrance is kind of humdrum during the day but it looks pretty cool at night. 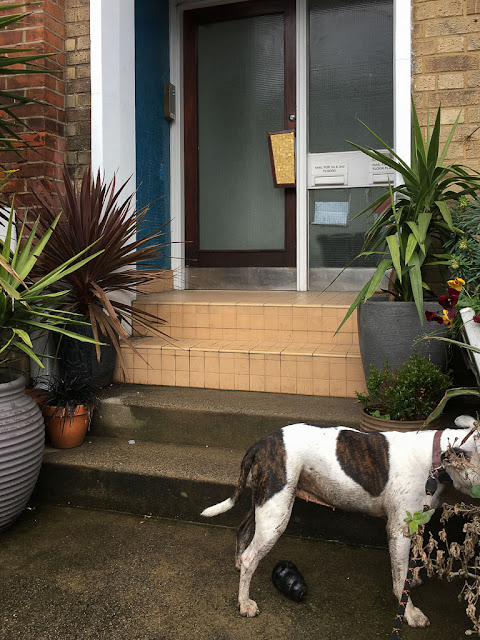 Here's another block of flats that Olga and I often pass on our way to and from the cemetery. I love that mod tiled entranceway and the door with the gold, wedge-shaped handle. (Muddy Olga was more interested in drinking rainwater from the saucers of the potted plants.) 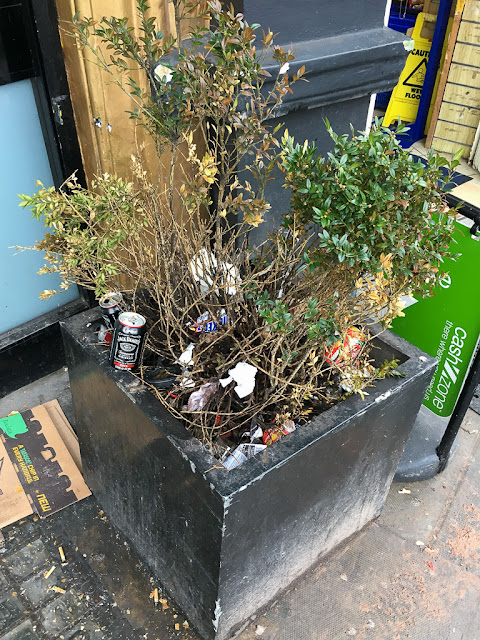 Speaking of plants -- perhaps the saddest potted plant in the world, outside a kebab shop near the West Hampstead tube. 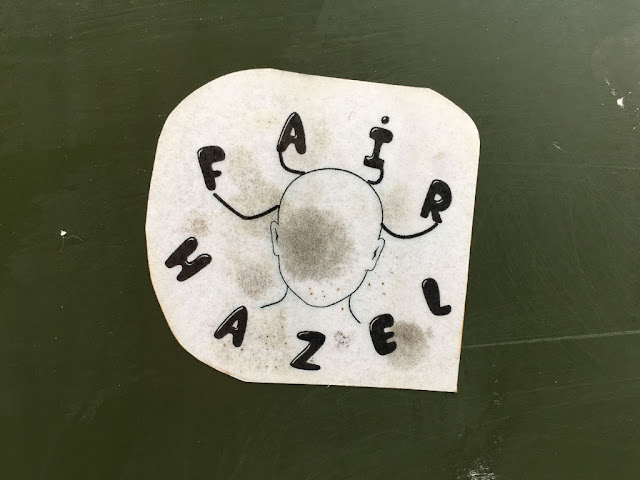 This sticker on a telephone switch box caught my eye, because there's a street near our neighborhood called Fairhazel Gardens. I wondered what it could mean. Turns out there's a singer who goes by the name Fairhazel -- I'm guessing it's his. (He's good, by the way, and I like his rather mesmerizing music video.) 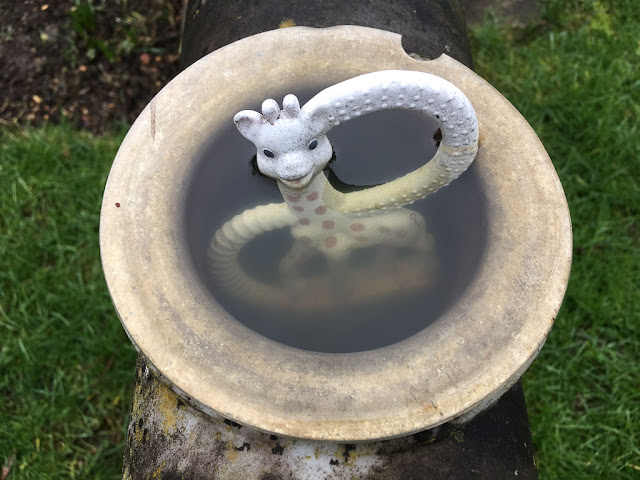 This baby teething toy was abandoned at the cemetery in a random vase full of water. It's been there a while. 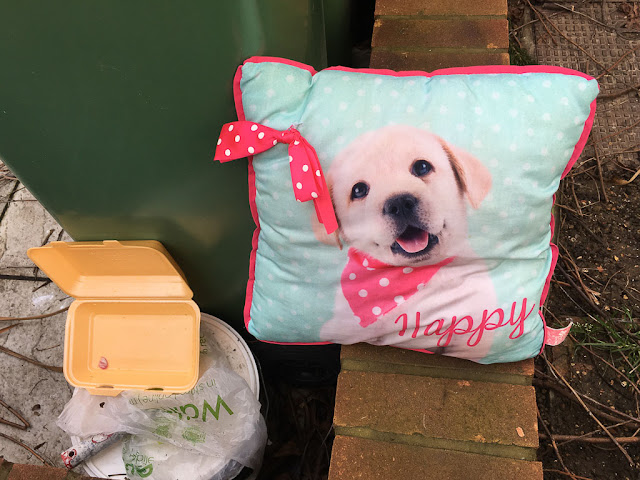 And this pillow was set out with the trash on my walk to work Tuesday. How can someone throw away THAT FACE?! 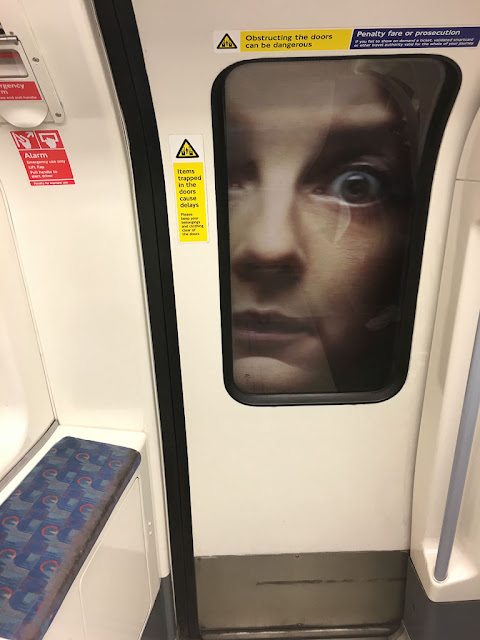 And speaking of faces, when I got on the tube to come home Tuesday night, this is what greeted me when I stepped into the tube car -- a giant face from a station advertisement peering in the opposite window. (I barely got this photo -- by the time I got out my phone and got the camera app turned on, the train began to move! And now the ad has been replaced, so that was my one shot.)
Posted by Steve Reed at 6:44 AM

Wow -- all of these shots are so interesting (as is your brief commentary!), but that last one is incredible!

Each photo a tiny story. Or a large one! The Nos 1-8 may be my favorite. I just love that style.
I feel sorry for that potted plant. Please someone, save it!
What a strange and unusual door handle on the mod place.
And whoa! That face! You GOT it! And it's awesome.

fun set of pictures. that poor plant struggling to survive.

A great set of photos! You see such cool stuff. That last photo is truly grand. Love it!

That second photo looks like something straight out of a Hercule Poirot episode. Very art deco. I enjoyed that song by Fairhazel but I wasn't quite sure what to think about the video. That last photo is perfect! Now that is a photo that you could fit easily into a number of music videos.

I wonder how many other people saw the last photo? Most people would ignore the image.

That shot of the face from the tube is fantastic!

the tube is always surreal but that photo takes the cake, it takes all of the cakes!

What?! You didn't take the time to clean all the garbage out of that potted plant?? Who are you and what have you done with the real Steve?!

Does Olga ever get sick from drinking indiscriminately?

Enjoyed your photos, as always.

Whoa! That giant face is the stuff of horror flicks. Great capture!