China Patterns I Have Known 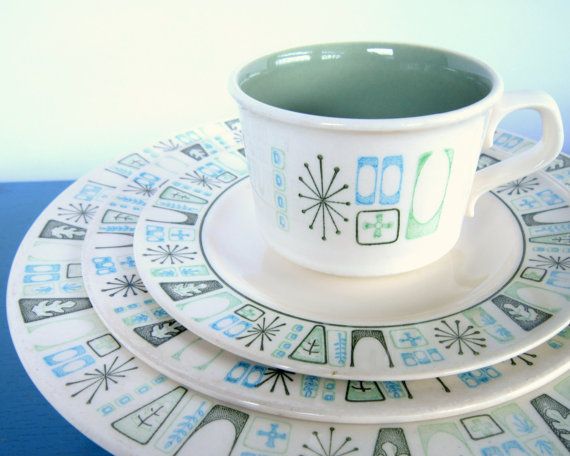 When I was in my early 20s, as I'm sure I've mentioned before, I was a thrift store junkie. I used to go on road trips all over Florida with friends, and whatever town we visited, we'd hit the Goodwill and Salvation Army. And if there was a flea market as well -- BONUS!

I used to search out groovy old '50s and '60s home furnishings, which at the time were easily available and inexpensive. I had a particular soft spot for casual American china in abstract patterns, the kind that would originally have been sold in grocery stores or given in exchange for S&H Green Stamps. For example, the pattern above -- "Cathay" by Taylor, Smith and Taylor -- was one of my favorites, and I put together a huge set made entirely of individual pieces I bought here and there all across the state.

I don't have any of this china anymore. It was a pain to store, care for and pack every time I moved, and in the case of Cathay, it wasn't even entirely functional. The coffee cups were tiny. By the mid-'90s I'd sold or given nearly all of it away in favor of a modern 16-piece set of plain white dishes from Pottery Barn. (Which Dave and I still use!)

But I got to thinking the other day about the incredible variety of patterns I used to find. Here are some examples. (Obviously none of these photos are mine -- they're all borrowed from the Interwebs.) 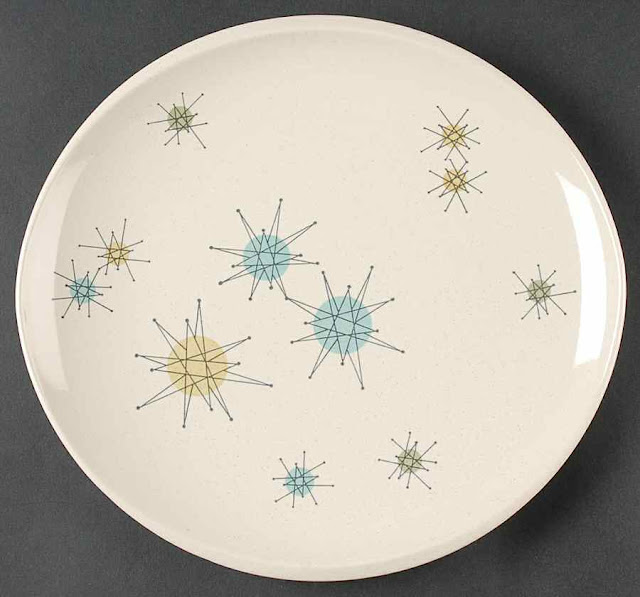 "Starburst," by Franciscan, was a collectible pattern even back then, featuring groovy atomic shapes on a pebbly background. It's even more collectible now. My friend Karl amassed a large assortment of it which, last I checked, he still has. 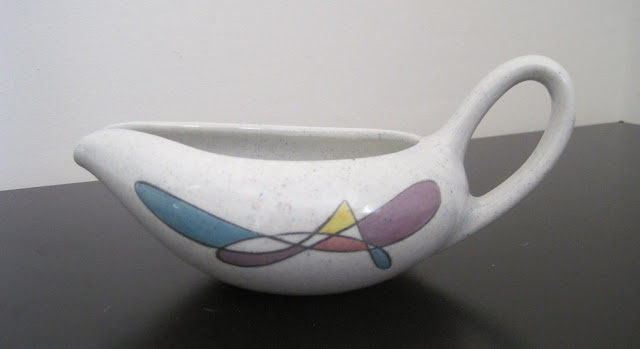 This was "California Mobile," a version of Metlox's "Poppy Trail" pottery. I used to have a gravy boat just like this one. Isn't it great? That specimen above is selling online right now for $33. 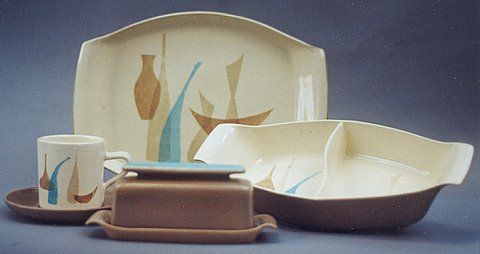 This was a pattern by Red Wing called "Pompeii." My friend Paul gave me a set of this stuff, which I always liked, but it lived in a box in my spare bedroom and I don't think I ever actually used it. I eventually gave it back to him when I downsized to a smaller apartment. Knowing Paul, he may still have it! 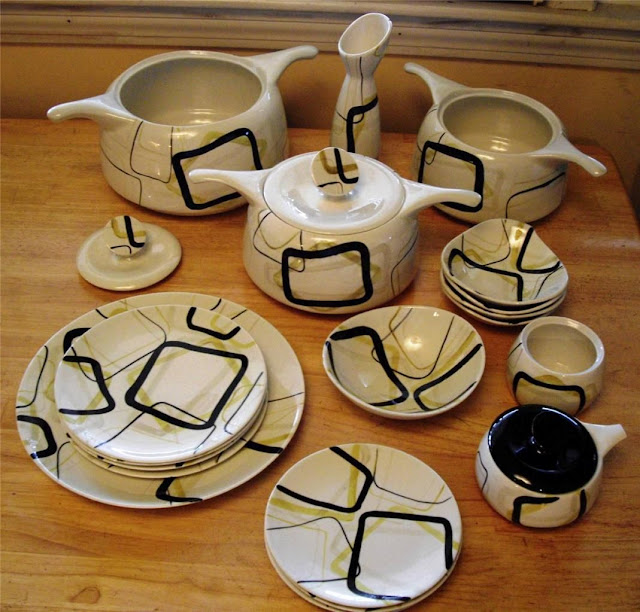 This was another Red Wing pattern, called "Smart Set." I had a casserole and pitcher in this pattern, and tragically, my cat Howard knocked the pitcher off the counter and broke its handle. I glued it back together, but in the world of collectible pottery, the breakage rendered it pretty much worthless. I eventually forgave Howard, but I never forgot. 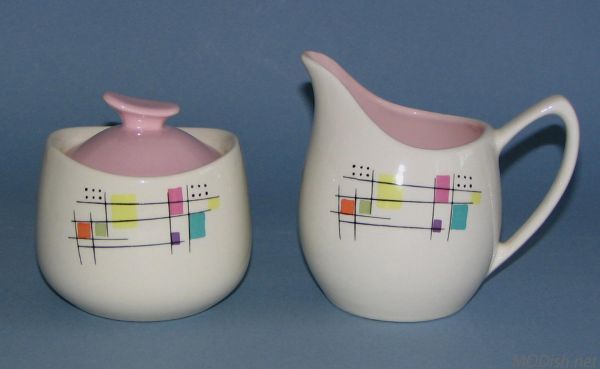 This was a Salem pattern called "Mosaic." I had two cups in this pattern -- all that I ever found. 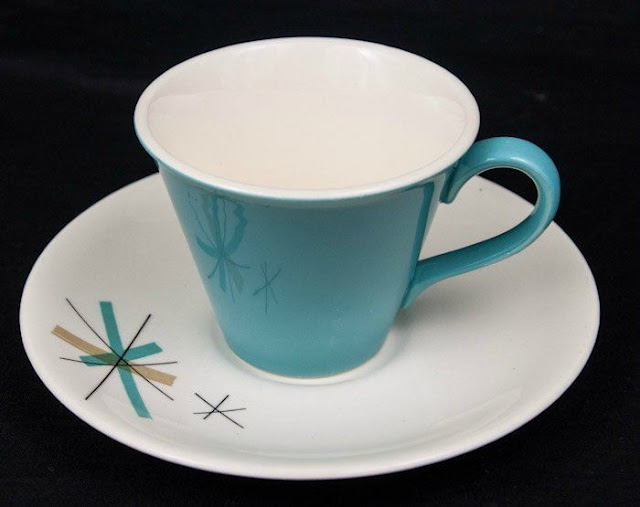 This is another Salem pattern called "North Star." It's very common, or it was at the time, and I amassed a gigantic 60-piece set which I used for my everyday dishes. I eventually tried to sell them all at a consignment shop, and when they didn't sell I wound up donating them back to Goodwill. Again, tiny cups. 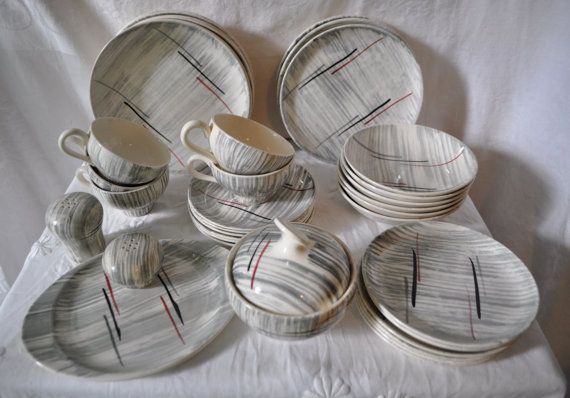 I never knew what this was called, but I learned yesterday that it's Stetson pottery's "Hiawatha" pattern. I had just a few pieces. I remember sitting out on my balcony one afternoon, shortly after I'd moved to Winter Haven to take my first job after graduating from college, and drinking coffee from my Hiawatha cup. I felt so adult.

Isn't it weird what sticks in my head? I can't learn French but I'll remember that forever. 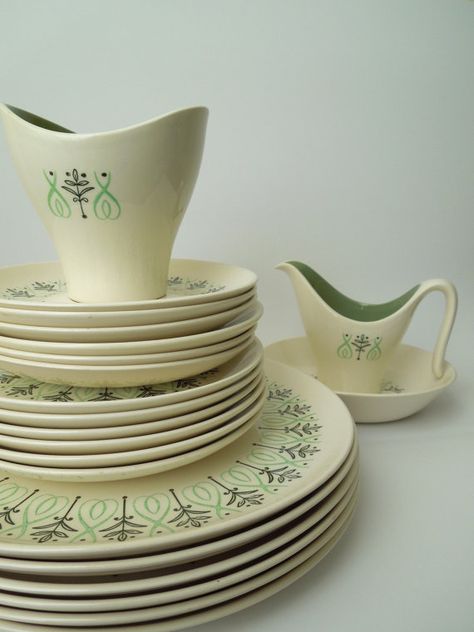 This was a Taylor, Smith and Taylor pattern called "Del Rey." I had a coffee pot, cup, creamer and sugar bowl that adorned my kitchen counter for years. In fact, here they are, in a tightly cropped picture of my kitchen in Tampa from 1988: 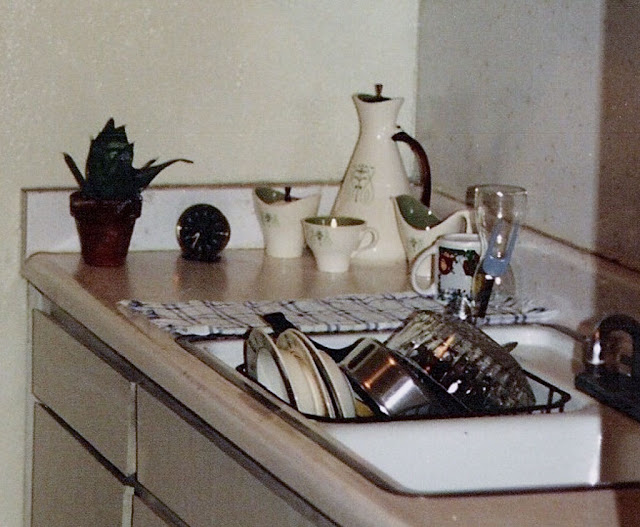 You can see my Cathay in the dish drainer.

Nowadays, with the Internet, finding this old china isn't hard. But back then, there was a real sense of discovery about it -- your haul depended solely on what any given thrift store or flea market happened to have in stock. And you never knew what all the pieces in a set would look like, or even which ones existed. Was there a Cathay coffee pot, for example? (Now, using the Web, I see that the answer is yes, but I never saw one in real life.)

To be fair, my fondness for china wasn't just about the dishes. It was also about the time I got to spend with Paul and Karl at early morning flea markets, or with Kevin and Suzanne on long road trips to distant thrift stores. Those activities cemented friendships with people I still care about, and made terrific memories. And there was the satisfaction that came with collecting.

I kind of miss all this old stuff! Maybe one of these days I'll pop onto eBay and pick up a piece or two of Cathay or North Star, just for old times' sake.
Posted by Steve Reed at 6:42 AM