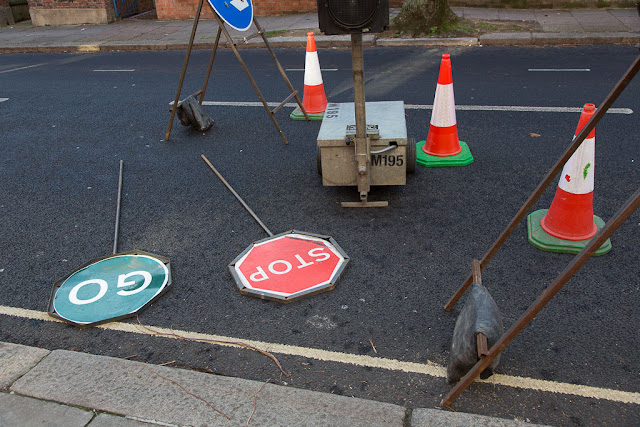 After enduring our windy weekend, and writing yesterday's post about it, I've been thinking about wind, and the idea that wind puts people's nerves on edge. I know I've felt edgier the past several days, and our weather has been unsettled all that time. It's still gusty out there, though not nearly as bad as it was on Sunday. 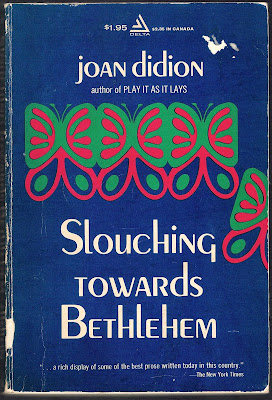 I turned to my old paperback copy of Joan Didion's classic essay collection, "Slouching Towards Bethlehem," from 1968. (I bought this book for a quarter at least 30 years ago and it's undoubtedly among the best quarters I've ever spent.) I seemed to remember Didion making a connection between wind and tension, and sure enough, it's in the first paragraph of the first essay, "Some Dreamers of the Golden Dream":

"The San Bernardino Valley lies only an hour east of Los Angeles by the San Bernardino Freeway but is in certain ways an alien place: not the coastal California of the subtropical twilights and the soft westerlies off the Pacific but a harsher California, haunted by the Mojave just beyond the mountains, devastated by the hot dry Santa Ana wind that comes down through the passes at 100 miles an hour and whines through the eucalyptus windbreaks and works on the nerves. October is the bad month for the wind, the month when breathing is difficult and the hills blaze up spontaneously. There has been no rain since April. Every voice seems a scream. It is the season of suicide and divorce and prickly dread, wherever the wind blows."

Didion further dissects the tension inherent in the Santa Ana wind in her essay "Los Angeles Notebook," and she wasn't the first person to remark upon it. Raymond Chandler, the consummate Los Angeles storyteller, famously wrote:

"There was a desert wind blowing that night. It was one of those hot dry Santa Anas that come down through the mountain passes and curl your hair and make your nerves jump and your skin itch. On nights like that every booze party ends in a fight. Meek little wives feel the edge of the carving knife and study their husbands' necks."

These are two relatively recent references to edgy winds, but writers have mentioned them for hundreds of years. John Heywood wrote of "an ill wind that blowth no man to good" way back in 1546. I'm sure writers in other cultures have drawn similar connections. And to bring Shakespeare into the loop, we're near the Ides of March, the season of danger and betrayal.

Of course the wind we've been feeling around here isn't like the Santa Ana. It's not a desert wind; we're not living on the brink of combustion. Our gusts have been recorded at 65 or 70 mph, not 100.

But it's still enough to make the house shudder and knock over the patio chairs and get on my nerves.

(Photo: A roadwork project near our flat.)
Posted by Steve Reed at 6:56 AM