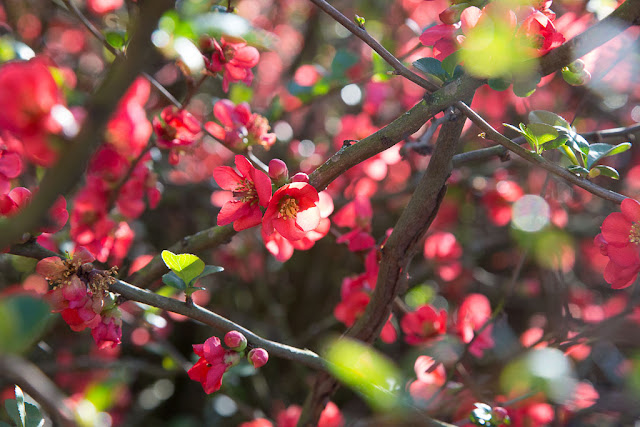 This big flowering quince bush is in Hampstead, on the way to Hampstead Heath. Here's the whole thing: 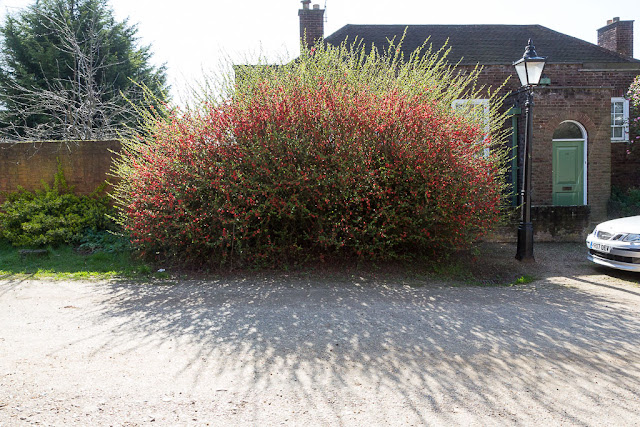 We have one in our garden that Dave planted several years ago, but it's nowhere near this big. (Which is a good thing, because it's right next to the camellia and I'm not sure there's room for both of them -- not the best planning on our part.) Anyway, ours gets a few flowers every year, but nothing like this.

So that's the happy news for the day. Now for the serious stuff...

I'm about 3/4 of the way through "The Uninhabitable Earth," David Wallace-Wells' tome about climate change and global collapse, and I'm having some interesting reactions to the book. Primarily, despite his barrage of frightening statistics, I'm having trouble really absorbing it on an emotional and psychological level. I don't doubt that global warming is occurring, and I don't doubt that things could get as bad as Wallace-Wells says they will. But I think I'm suffering from some typical human psychological adaptations that he names in the book -- primarily "anchoring," which means I read all his scary information but then look outside and everything seems fine, the garden is in bloom, the sky is blue, and I re-anchor in the non-threatening present moment. Or I think, well, all this terrible stuff could happen, but we also don't really know -- beyond the indisputable fact that we're causing harm, a lot of climate science is conjecture -- so couldn't the extremes just as easily not happen? Again, I'm not a denialist, at least not like certain Republicans. I realize the planet is warming, as we've seen with our intensifying floods and hurricanes and whatnot. But I'm not sure I'm living the reality as deeply as I should be.

And then what do we do with the information? Fortunately I already vote a climate-conscious ballot, which seems to be Wallace-Wells' main recommendation. He disparages other individual solutions like recycling, going vegan and campaigning against plastic as red herrings, distractions from the real issue. "The climate calculus is such that individual lifestyle choices do not add up to much, unless they are scaled by politics," he writes.

He's also weirdly focused on the fate of humanity to the exclusion of other creatures -- despite the sad picture of the dead bee on the book's cover. "None of (the book) concerns the tragic fate of the planet's animals, which has been written about so elegantly and poetically by others that, like our sea-level myopia, it threatens to occlude our picture of what global warming means for us, the human animal," he writes. I confess, I tend to respond more to the plight of the animals than humans. We brought all this on ourselves with our greed and rampant reproduction. The animals are blameless.

The book is full of shocking statistics. Did you know, for example, that Bitcoin, which involves energy-intensive currency management systems that I only barely understand, now produces as much carbon dioxide each year as a million transatlantic flights? (Step one: Let's get rid of Bitcoin!) Or that humanity is burning 80 percent more coal now than we were in the year 2000?

So much of the environmental degradation Wallace-Wells discusses has occurred only in the last two decades. It makes me wonder how different the world would be if Al Gore had won the presidency in 2000. Had that knife-edge vote tipped the other way, we would be in an entirely different place -- in many respects.

Anyway, it is a thought-provoking book, and I have no doubt that humanity is headed for an indefinite and possibly endless period of climate-related struggle, with displaced refugees and competition for resources and conflict and war. (I continue to boil this down to the fact that there are too freaking many people.) The vast majority of the fallout from climate change will occur beyond my own life span, but we're seeing it already and even the next few decades should be interesting. Buckle up!
Posted by Steve Reed at 6:23 AM