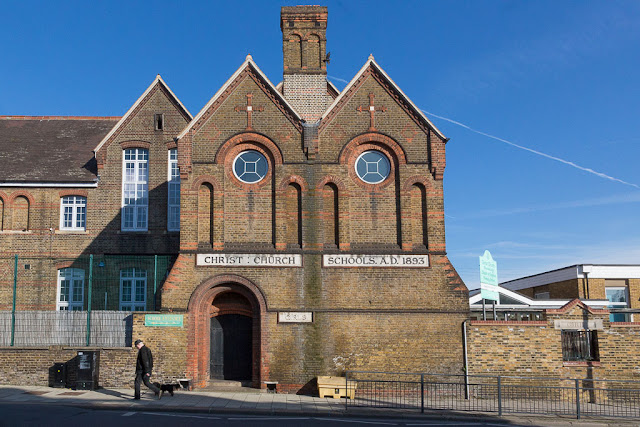 We've had a bit of a cold snap, bringing sunny days and breezy nights with temperatures all the way down to about 37º F. Still, it's nothing compared to the cold hitting parts of the USA right now. It still feels springy here, with the blooming trees and daffodils apparently unaffected.

Yesterday I had to mail some train tickets back to the Thameslink railroad for a refund. I bought the wrong kind of tickets when Dave and I took the train to Gatwick for our trip to Malta a couple of weeks ago, due mainly to the bewildering array of ticket options and prices depending on distance, time of day, one-way or round-trip and that kind of thing. (In other words, it's the railroad's fault, not mine!) We wound up having to buy replacement tickets to return to London. So I'm hoping I can get a refund for one of those sets of tickets. We'll see.

I'm only mentioning it because I had to mail them to a little town near Leicester with the terrific name of Ashby De La Zouch. I'm sure there's some illustrious history behind that name -- it's probably Norman. I noticed on Google Maps that the town has a castle, which you can explore virtually. Isn't that great?

Unfortunately, we've already cancelled out whatever financial recovery we can make from Thameslink with another, unrelated loss.

Last night, Dave set out to make fish pie. He'd planned to make it Sunday and even went to Sainsbury's for ingredients, but then we got sidetracked by Carolyn's visit and our late lunch at the pub. So he put it off a day.

As I watched TV yesterday evening, he went into the kitchen and began whipping up fish velouté (whatever that is -- apparently it goes in fish pie). Then I heard him muttering and thrashing around in the refrigerator.

And that's how we discovered the three packages of haddock, cod and salmon that Dave bought for the pie were missing. We're sure they're nowhere in the house -- we (and Olga) would have noticed by now. Dave thinks he left them at the Sainsbury's checkout counter -- after he paid for them, of course -- and then never noticed as he unpacked the groceries here.

I just hope that fish isn't riding around in a taxi somewhere. Temperatures have been colder, but not that cold.

Anyway, we put the velouté in the refrigerator, and Dave will buy replacement fish today. Fortunately, we had a package of chicken that did make it home from Sainsbury's, and that was dinner.

(Photo: An old school building in Kilburn.)
Posted by Steve Reed at 6:12 AM

I hate when I do stuff like that -- it's maddening. I recently bought nonrefundable, no change airfare for my son Oliver and I to fly to Arizona to attend orientation for his upcoming college year. We discovered that the day we picked is the same day as his high school graduation ceremony and that we will not get a refund for any of the cancelled ticket. Now I have to buy NEW tickets for the new date for orientation. Grrrrrr.

I suspect that Thameslink will charge you an "administration fee". That's what happened with me when I tried to get a refund from Northern Rail. Do you think that Dave might be showing early signs of Alzheimer's? Never mind, I am sure you will make a great full-time carer.

Ask at Sainsbury, someone may have handed them in, they might just give you a replacement.
Briony
x

How annoying, annoying that must have been for Dave about the fish.
But Ashby de la Zouch? I love it! - sounds like a cartoon villain.

Marty's right. Ashby de la Zouch does sound like a cartoon villain.
Poor Dave! We all do things like that and it can be infuriating. This morning I lost my phone in the first five minutes of being up. Even more common for me is losing things IN the refrigerator. Generally I am staring right at the missing object. Or else I'm convinced that I have something in a cabinet only to discover I've already opened it and it's in the refrigerator where...it's a miracle I've found it.

Yesterday Mike brought home three cans of black beans (which I've been eating voraciously lately) only to discover that we still had 2 in the cabinet. That's a lotta beans! What I'm saying is that grocery stores do something to your brain while you're in them. It's really not surprising when extra things show up or other things go missing.

Tickets! It's a case of trying to give many options and then it gets too complicated and causes problems. I hope you get it cleared up.

Some English towns/villages have the most unusual names and Ashby de la Zouch is certainly top of the list. That fish situation sounds familiar. I've done that before and I've also come home with things I didn't buy. I haven't had that happen since I started taking my own grocery bag to the store.

About your comment, yes I can take videos with my camera. The problem is I never remember to do it. I also need to get a YouTube account. I did try once to post a video on my blog and it was so tiny it wasn't worth doing. I'll see if I can't do better on that front.

how cool that you can see the castle online. which I did. it's cold here, freeze cold. got down to 29 last night and is still only 32 out there now. I hate when we get late freezes after everything has started coming out and blooming.

Ah the case of the missing fish. Made me think of all the detective stories from England on Netflix. Wouldn't it make a funny and delightful mystery story?

That was fun! going around the ruins on an idyllic day, all of the soft green grass and stands of trees. Thank you.
I also take my own bags to the shops and rarely forget anything, my bags being obviously garish,difficult to misplace. Our town has passed a no plastic bag law a few years ago, so if you have forgotten your bag you must buy a paper one for a dime. That has trained people well. People can't bear to part with a dime.
"Honey, where's the fish" might just become part of my everyday befuddlement. We are at that age...

With those kind of expensive mistakes, it sounds like neither of you is ready for retirement yet. Keep working!

Sorry about the tickets and the fish; neither is cheap. But I have to admit that "thrashing around in the fridge" and "where's my fish" made me laugh, and also made me picture Detective Clouseau in my head :D

Oh, it is maddening when I do things like that! We all do it at times and no, it’s not a mark of age-related illness! It is due to the fact that there are too many things to think about when shopping ...work stress, or a greeting card you need from the next store, or what the doctor said, and do I have my sunglasses....these days there is a whole lot of stuff to keep track of, and it’s easy to overlook something. We all try to multi-task all the time. I once left a whole raw chicken, deli meat and a dozen eggs sitting directly on the dining table overnight, and never saw it until I returned from work the next day! I love old castles, roaming about them and all that history is intriguing, I imagine the souls that have walked there...

So sorry for your expensive mistake with the fish. I hope you had a fun visit with your Peace Corps friend.

I've left things behind more than once in the last few years in the market, but each time I've called and the store was aware of it and allowed me to replace my items the next day. I think though, in my defense, each time a store bagger had forgotten to put the groceries back in my cart. How disappointing though when you've started a recipe!