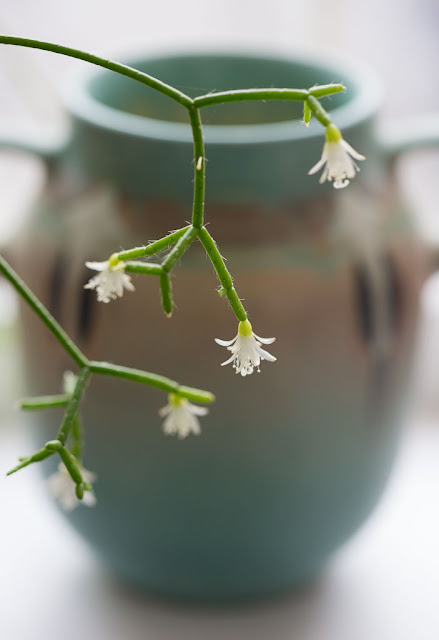 This is a year of firsts in our household! In addition to our little round cactus with its yellow blossom, our bird's-foot cactus has also put out flowers. I've only seen this happen once before that I can remember -- about 20 years ago, when the parent plant of this one bloomed. (Remember, I grew this from a cutting taken from my plant in Florida.) It may have bloomed more often and I just never noticed -- the flowers are somewhat inconspicuous -- but still, it's exciting! 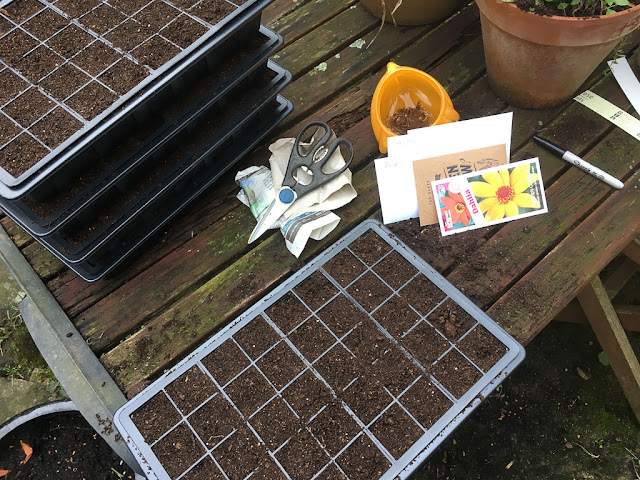 Hopefully some of that horticultural magic will extend to our seeds, which I finally got planted yesterday. It took much longer than I expected -- at least an hour and a half. To make things more interesting, the sun disappeared behind clouds and occasional gusts of wind whipped across the patio, where I was working at the table. By the end I was shivering and I'd probably lost a few seeds, but oh well. 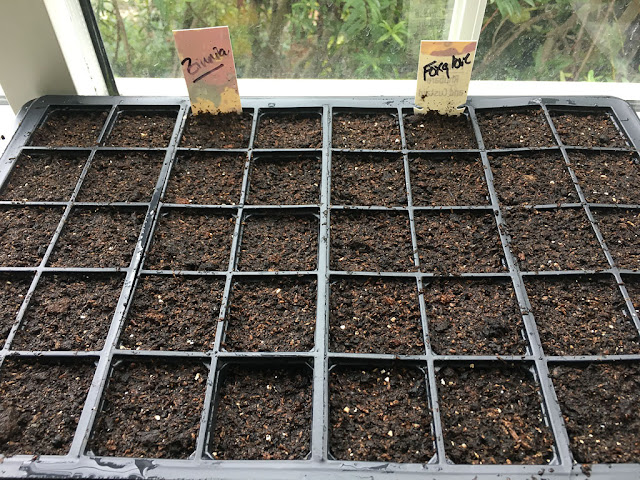 I planted commercial packages of dahlia and lavender, as well as zinnia, foxglove, burdock, hollyhock, honesty and hogweed that I collected myself. I have no idea whether any of those self-collected seeds are even viable, so this is all a big science experiment. The seed trays are in the dining room on the windowsill, where they get full morning sun. I'll keep you posted!

Then, as Olga and I set out on a walk, I noticed that our recycling bin was almost completely full. This was curious, because our trash was just collected on Friday. I looked at the bags and they were full of garbage, not recycling. A closer look produced envelopes addressed to -- you guessed it -- our neighbor Mrs. Kravitz. She's at it again, throwing her trash in our bins.

I was so angry I saw red. I upended our bin into one of hers, then marched up to her front door and told her husband that this had to stop. He was very contrite. But I seriously think we're going to have to padlock our rubbish bins. I know this sounds ridiculous, but I don't know how else to keep her out of them. If she fills our recycling bin with her garbage on a Saturday, we'll have nowhere to put our own recycling all week. Or am I being overly controlling? 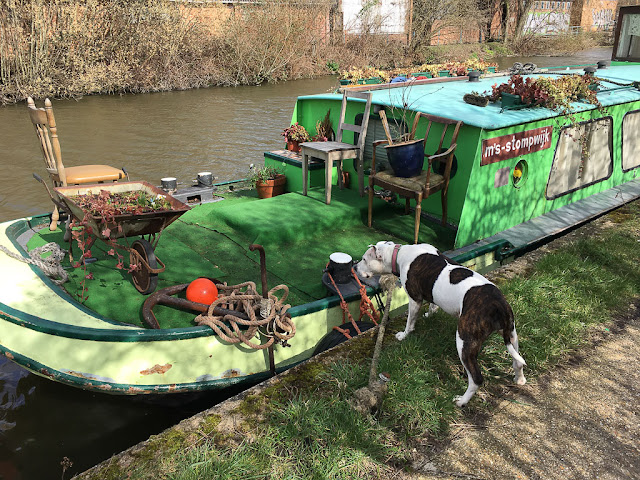 Fortunately, my long walk with Olga helped me calm down, although I'm sure I was muttering to myself like a crazy person the whole way. First we walked along the Grand Union Canal, where Olga was very curious about this whimsically furnished houseboat -- she sniffed and sniffed. Maybe they have a cat? 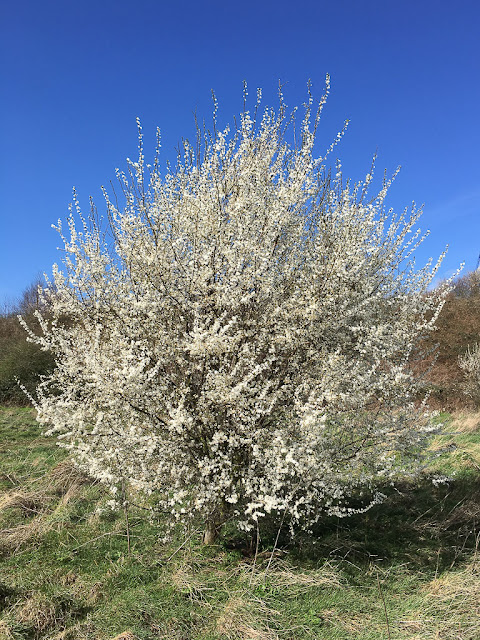 Then we got to the Scrubs, which are beautiful at this time of year with lots of this white-blooming shrub. I have no idea what it is.

We had a good long, and occasionally muddy, walk around the Scrubs and then took the Overground home. Olga always gets peculiar looks on the train ride back because by that time she's filthy. I feel like I should hang a sign around her neck that says, "This is a temporary condition. I'm about to get a bath."

Last night Dave and I went to a party at a colleague's house, for which Dave made fabulous espresso brownies. Parties can be a drag for him -- he can't drink because of his Crohn's, and being in a room full of people who are all sociably drinking has got to be frustrating. But he stuck it out, bless him.
Posted by Steve Reed at 7:24 AM