Leaded Glass and a Lost Frog 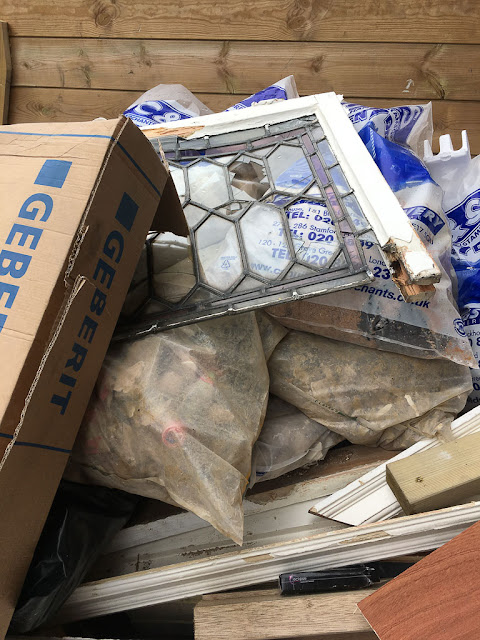 I had kind of a rough day yesterday.

As I was walking Olga before work, I passed a house on our street that's being renovated. The workmen had removed the beautiful old 1920s leaded glass windows and stacked them on a trash heap in the front garden. That's one of them, above, broken atop the pile of lumber and bags of rubble.

As you know, I can't stand waste. Something about the destruction of these windows just filled me with despair. And as the morning wore on, and I sat at my desk at work, that despair widened into a genuine depression about the state of everything -- the oceans and the climate and the wildlife and the insects and Trump and Brexit and the planet.

(I ordered a book for the library the other day called "The Uninhabitable Earth." It's about exactly what it says. And though it's been getting some interesting press, I'm not sure I'm going to be able to bring myself to read it. I'm freaked out enough as it is.)

Just before lunchtime, in my blue funk, I decided that I was going to make everything just a little less terrible. I was going to save those windows. 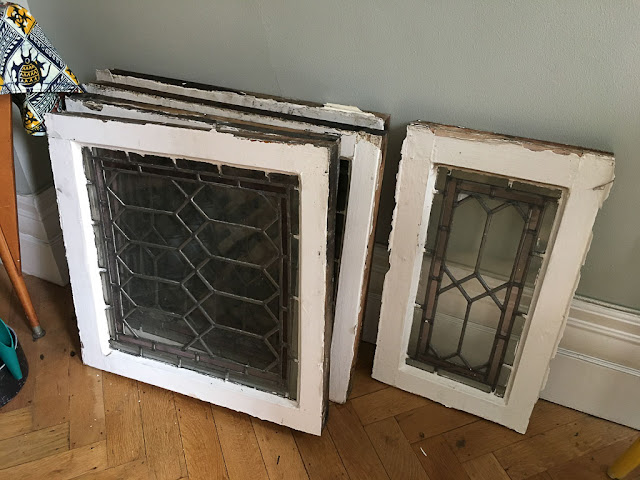 I hopped on the tube and went home, and I knocked on the door of the house under renovation. It took a while but I eventually got the attention of a workman on the second floor. "Is this rubbish?" I said, pointing to the pile of stuff in the front garden. "Can I have those windows?"

And that's how I wound up with five leaded glass windows. I have no freaking idea what I'm going to do with them. Probably something like... 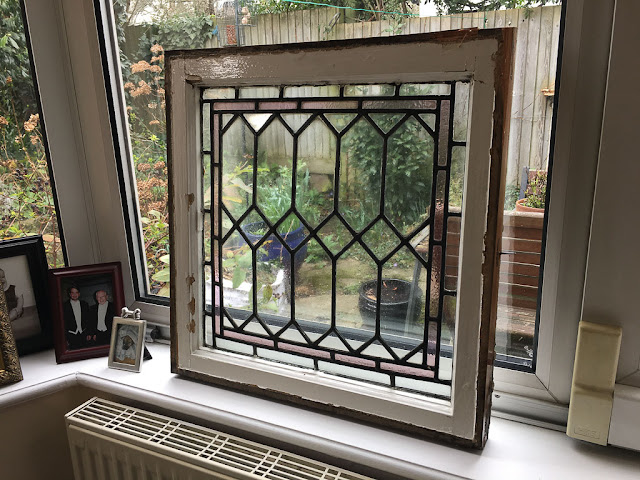 ...leaning them (or, if I get extra-ambitious, hanging them) in front of our own windows.

It took me two uphill trips to get them home, and let me tell you, those things are heavy. They seriously are lead. I didn't take the broken ones -- just the ones that hadn't been damaged.

On the second trip, to make this day and, in truth, this entire week even more surreal, I passed this on the sidewalk: 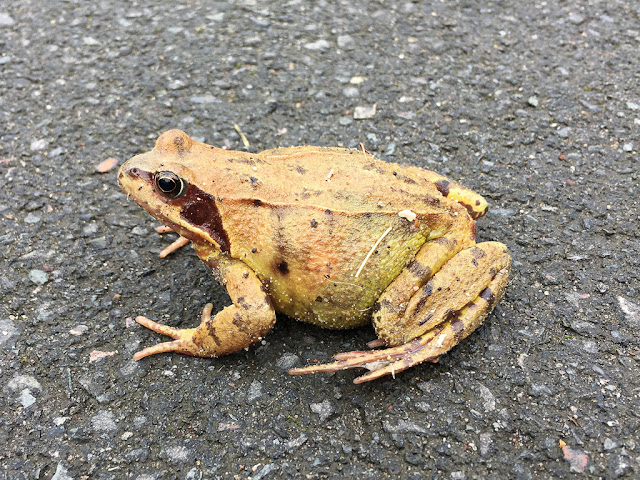 I don't think I've seen a large frog in the entire time I've lived in London. And then, out of the blue, one is sitting on the urban pavement as I walk home in the middle of the day, on the first day of March? While I'm carrying 75 pounds of leaded glass windows? We have no ponds or creeks nearby, as far as I know, so where it came from and where it was going is anyone's guess. It looked like it had been traveling for a while.

I nudged it off the sidewalk, into another neighbor's front garden, so it wouldn't get stepped on. I wish I could have taken it to a pond on the Heath -- but good grief, it was my lunch hour, and I can only do so much. I have to trust that nature can manage itself. Besides, maybe there's a spouse frog somewhere nearby.

I am not God. I cannot control the world and save all its creatures and heal all its damage.

At least I saved the windows. I felt pretty good about that.
Posted by Steve Reed at 6:02 AM