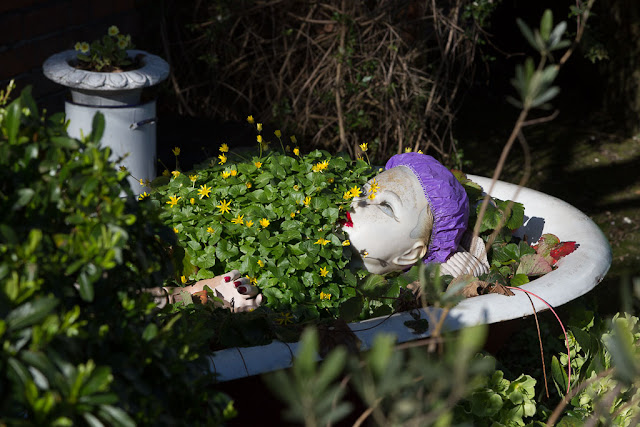 Remember the bathing beauty down the street? The one in the front garden of one of our neighbors? Well, she's still there, having her apparently eternal soak. In the years since I last blogged about her, someone's touched up her lipstick and given her a new bathing cap -- but otherwise the elements appear to have taken their toll. Her hair has pretty much rotted away. And now she's being engulfed by her vegetal soap suds.

I forgot to tell you, we had a bit of local excitement the night before last. Dave and I were watching TV in the evening when we heard helicopters circling overhead and lots of police sirens. "Something's going on!" I told him. This went on for a while, and when I looked at the news the next day, I discovered this story. (Basically, two guys were seen tampering with a motorcycle on the street, and when challenged they ran up to a rooftop and stayed there about seven hours while police tried to talk them down. They may or may not have been armed.) It sounds like kind of a non-event, ultimately, but it sure made a lot of racket, and that street isn't even all that close to us.

Seedling report: Out of curiosity I excavated one of our inactive dahlia seeds. I wondered if it had sprouted but then not broken the surface of the soil. (I thought maybe I'd planted them too deeply, in which case I was going to remove some dirt and see if that helped.) Well, I couldn't even find the seed, so apparently it never germinated. I guess they were just duds. So, as it stands now, I've had success with two burdocks, three hollyhocks, four honesty and one dahlia. Considering I planted 200 seeds, that's not so great -- but as I've said all along I had no idea whether many of them were viable, since I collected them myself. Oh well.

(I'm not counting the cosmos, which I planted later. It's still too early for them to make an appearance.)

I'll leave the trays until April 9. Then they'll be a month old and if no more seeds have sprouted by then, they're not going to!
Posted by Steve Reed at 6:42 AM

"Welcome back to Fox News. We're going over to Steve for the daily Seedling Report. Later Marilyn will be hosting the daily kitchen cleaning fluid debate followed by Tom's regular Goldfish News Report...and now a message from our sponsors - Trumpokov and Trumpsky Inc.."

Forget about growing dahlias from seed. Just get down to the nearest plant nursery and pick up a couple of tubers...
You may enjoy the challenge of growing plants from seed but dahlias - forget it! Too much work for too little reward. Just sayin'.
The bathing beauty cap disguises her rotting hair but it looks as though she's about to be smothered by the vegetation. Poor thing.
Alphie

I think that after two weeks if a seed hasn't germinated it's not going to. But I am no botanist!
That bathing beauty just charms me to pieces.

Now you have to figure out what seeds would be viable when you pick them!!!

Reading this reminds me that I need to go scatter the cosmos seeds I collected last year. They mostly scatter them themselves, but just in case, I like a lot of cosmos. Bathing beauty is interesting, looks a little bit like an open casket.

I remember that lady in the tub. I think I have a photo of her somewhere.
Those two young men sound like a pair of exceptionally untalented delinquents.
You have certainly had much better luck with those seeds than I would have.

I'm loling at the comments on the bathtub mannequin, and identify most with Robin's "casket" comparison!

My cosmos did poorly last year. I thought they would grow under just about any conditions, because when I was young my mother grew them in poor soil and they reached over three feet in height. Apparently my current spot for them lacks something they need - they didn't get over a foot high, and had very few blooms. Wah! My black thumb, maybe :)

Isn't it a pleasure to blog for years and be able to point back to an old post, "Hey remember this"?

P.S. Oh! And reading comments on that 2015 post, I learned that "Shadows & Light" is from Joni Mitchell:
I'm listening to the song now on youTube, and it seems impossible, but I don't think I've ever heard it! (I'm not much of a music person, but still... how could that be?)

YP: Sadly, that is pretty much what my blog has become lately. Except the Fox News part.

Alphie: The funny thing is, I would never have thought to grow dahlias from seed, except that I got a free packet of seeds. That's the only reason I planted them. Maybe there's a reason they were free!

Ms Moon: Well, some of mine have come up after two weeks, a few in just the last few days. I can't explain the huge time differences from seed to seed.

Red: There's no way to tell, though, is there?! You just have to try your luck!

Robin: It is weirdly coffin-like, isn't it?! Definitely scatter your cosmos! The more the merrier!

Sharon: Considering only 5 percent of them sprouted, that's pretty sad!

Jenny-O: I don't think they need good soil, but they do need lots of sun, as I understand it. Maybe you put them in a spot that was too shady?

Fresca: Yeah, I love looking back at my old posts! "Shadows and Light" was a live album from Joni's jazzy period. I must confess it's not one of my favorites, but I like the title's convergence with photography -- and I love both Joni and photography!