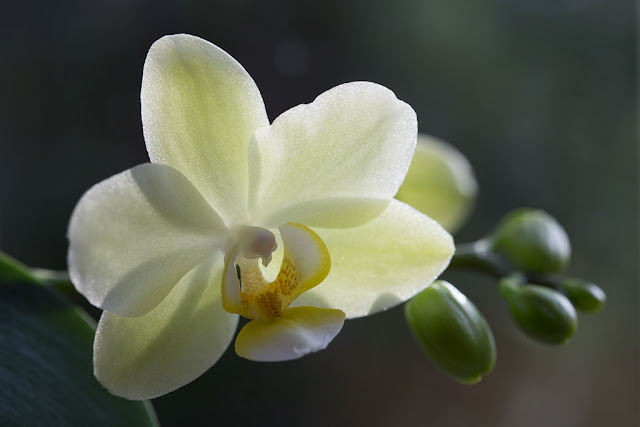 Here's our newest orchid blossom -- a small pale yellow one. We still have several more plants with buds, including two that I rescued from the trash and haven't seen in bloom yet. It will be interesting to see what they look like! 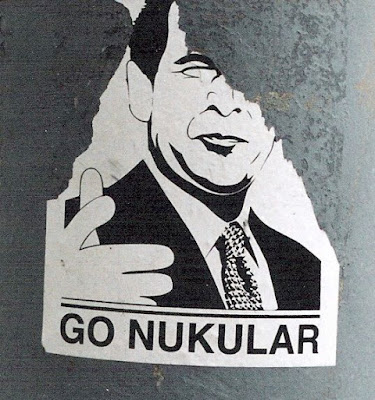 I took this photo of a sticker on a lamppost in New York way back in 2004. (Remember when George W. Bush seemed like the craziest thing that could ever happen to the U.S. presidency?) I thought of it yesterday because of an incident at school.

It's a long story, and not very interesting in the details, but suffice to say that I was trying to get a group of 8th Graders settled in the library -- telling them to sit down and be quiet, basically -- when one of them mimicked me. I turned to that kid and said, "I don't appreciate being mocked." Well, an 8th Grade teacher happened to be passing through the library at that moment and she ordered the kid out of the library and banned him for the rest of the school year -- and because she didn't see what happened, but only heard it, she unwittingly yelled at the wrong kid! So then we had to sort everything out. The kid who mocked me eventually apologized, and as far as I'm concerned the whole incident is over. I appreciated the teacher's intention to help me out, and I thanked her for it, but I think she went awfully harsh awfully quickly. In other words, she went nukular.

Dave and I watched "Leaving Neverland" this week. As I've written before, I am not a huge Michael Jackson fan. I've never owned any of his albums -- although they were certainly all over FM radio while I was growing up -- and I don't have the emotional investment in him that some fans do. To me the documentary seems completely believable. As I remember, even before there were public allegations of child abuse against Jackson in the early '90s, there was buzz about his peculiar attraction to young boys. I think we all suspected something was up. What's interesting is the pushback the film has received from Jackson's supporters -- yesterday a London bus passed me bearing a big advertisement for a pro-Jackson web site that refutes the movie's allegations. Who paid for that, I wonder?

It's fascinating how entire families were utterly blinded by Jackson's stardom. They were literally star-struck. The powers of celebrity and his naif persona were apparently incredibly magnetic. Anyway, regardless of how you feel about him, it's an interesting and tragic movie.
Posted by Steve Reed at 8:03 AM