Poison, Lillie Langtry and The Saint 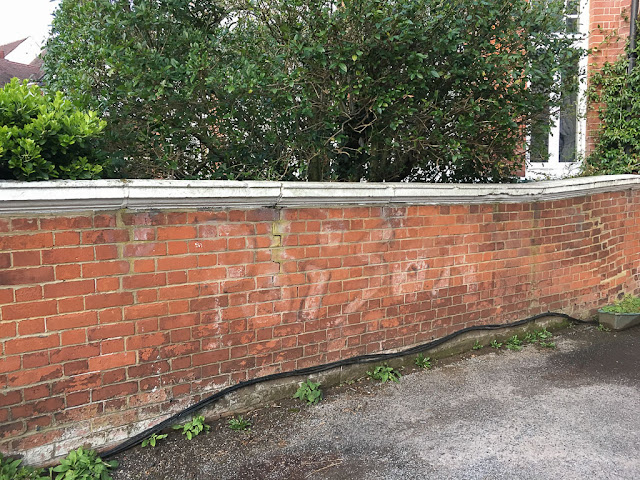 Here are this week's iPhone pictures, mostly from my walks to work.

First, I noticed long ago that this wall on our street bore traces of old graffiti. But I could never read it until Thursday, when, for some reason, the light and the moisture on the wall and maybe other factors all conspired to render it clearly: "Poison." A tag? A threat? Who knows. 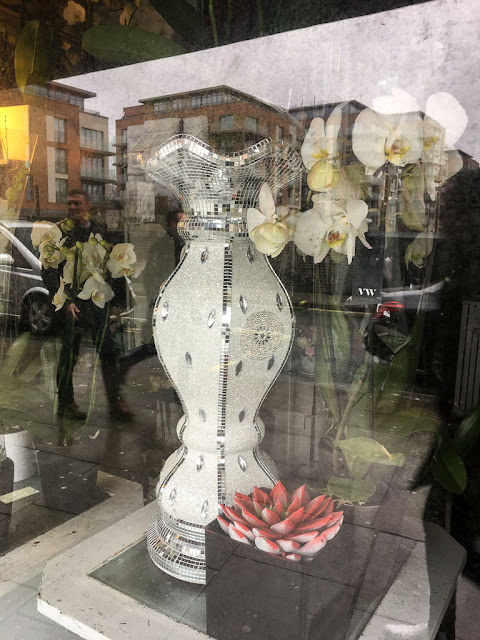 Amid dreamy reflections and behind a dirty florist's window, maybe the ugliest planter ever in the history of the world! 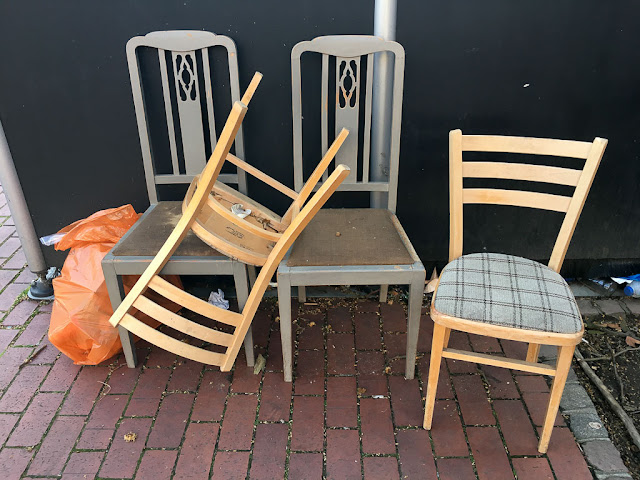 I've never lived in a place where people throw away so many chairs. We have three rescued chairs in our flat. I couldn't take these on too, but maybe someone else will. 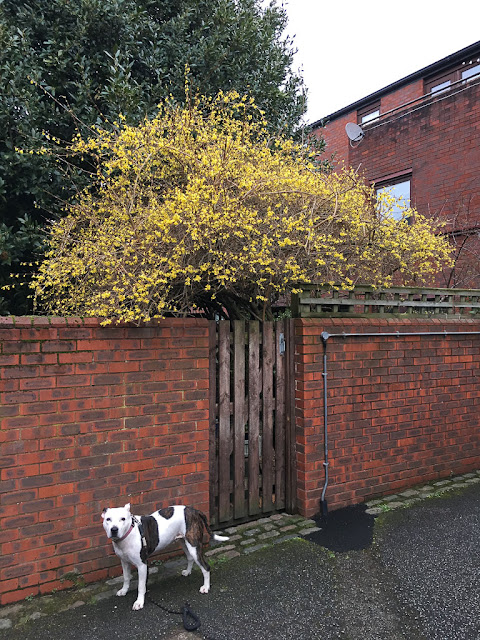 Olga and I came across this forsythia on our walk yesterday. Olga's saying, "What's the big deal? We have one of these on our patio!" This one's bigger, though. I thought it was pretty impressive. 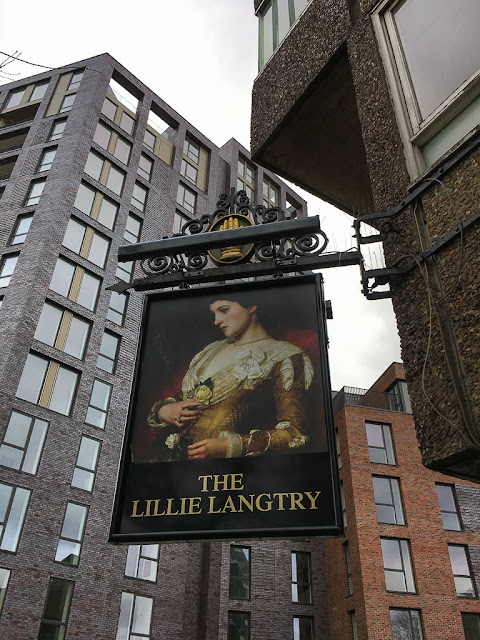 The Lillie Langtry pub got a fancy new sign several weeks ago. Here's the old one. 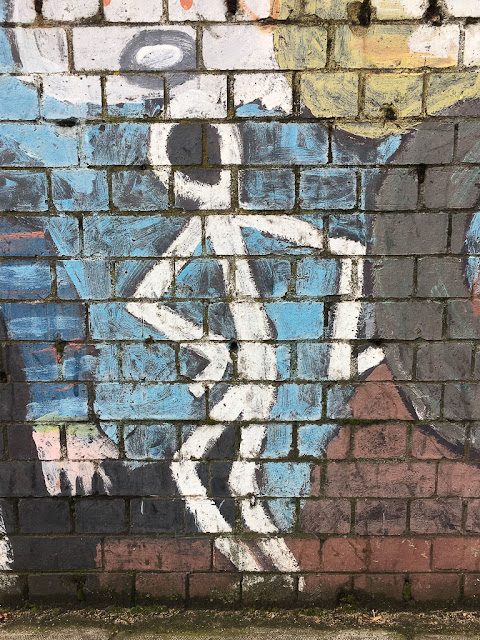 I blogged before about the murals painted by children in 1978 on Abbey Road. I pass them every day when I walk to work. But somehow I never noticed until this week that they include the logo from one of my favorite vintage British TV shows, "The Saint." Simon Templar! 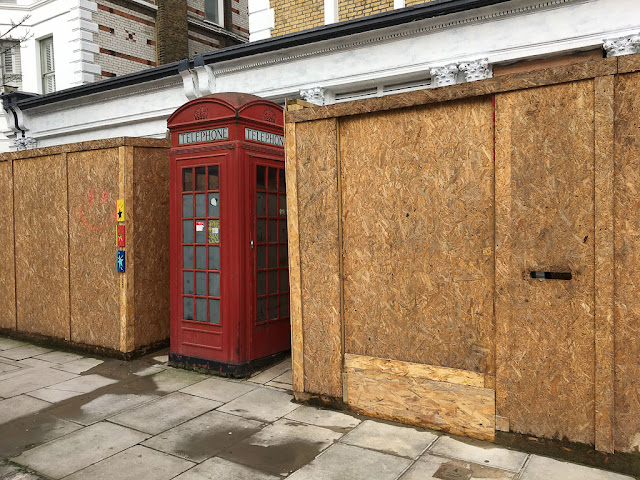 One of our favorite old pubs in St. John's Wood is being renovated into something else -- the pub itself having closed several months ago -- and it's surrounded by this plywood wall. I thought it was funny how the wall skirts this old phone box. I'm not sure it's even operational anymore, but it's probably still owned by the utility and thus must be kept publicly accessible? (Just a guess.) 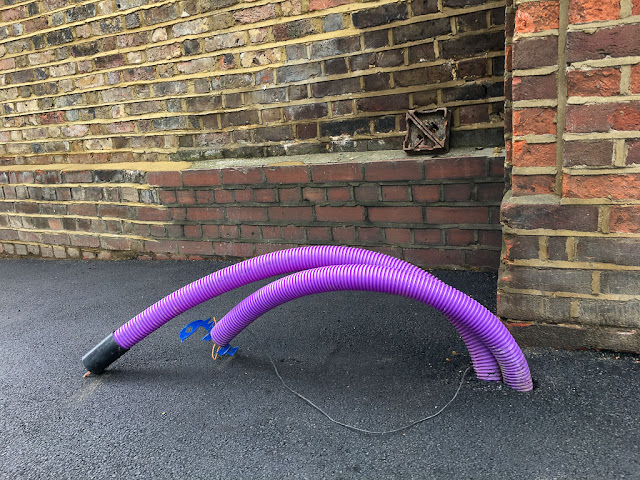 Finally, some interesting modern art! Except it's not -- I actually have no idea what these pipes are for, but I think they have something to do with utilities or construction. For ages this parking lot (British: car park) was torn up and diggers were working here. Now, abstraction!
Posted by Steve Reed at 6:06 AM

Another selection of interesting photo's, how do you do it Steve? you just have an eye for quirky.
Briony
x

Perhaps the graffiti artist responsible for "Poison" was a dyslexic French youth who meant to write "Poisson" (Fish). Fish was the leader of a neo-progressive pop band called Marillion who were big in the eighties. That is my theory and I am sticking to it.

purple pipes, pretty sure some thing is living underground , those ,
its breathing tubes. Good for you for passing up the chairs, I don't think I could. Weakness for chairs, so now I buy mini chairs usually from charity shops.Olga does look like she is humoring you. Cute little girl, she is patient isn't she.

LOVE the phone box nestled into the ply wood. It looks important, and well loved.

Wow! Vivid purple or what. Electricians use all kinds of color codes for wiring. Maybe that's what it's about.

This is really an interesting assortment today. That "Poison" ghost doesn't look like graffiti to me. It looks like it was purposefully put there. Agreed about that planter. I wonder why the persons who have discarded those chairs didn't take them to a charity shop. I remember seeing plenty of them in London. I love the new Lillie Langtry sign. I used to love The Saint too! But then, I seem to prefer British television and movies in most cases.

another fun assortment. perhaps Poison is/was the name of a band. public phone booths are few and far between now if any exist at all. what do people do who don't have a cell phone? is there anyone who doesn't have a cell phone? and I'm with Linda Sue, breathing tubes for something living underground.

Yes, Poison sounds like a punk rock band to me. I like the new Lilly Langtry sign and I'll bet that pub is a cozy place. Could that phone booth be the disguised TARDIS of Dr. Who?

I was thinking along the same lines as YP except I was going to suggest that you sneak out in the dark of night and add an "s" to make poison poisson :)

I don't understand the chairs either - are they being made that poorly now or are people just really hard on them? We still have all the chairs we ever bought plus a couple from generations before us!

You always come up with interesting stuff...out of this, the purple caught my eye. That could make an interesting sculpture if someone wanted to give it a go...and Olga is very calm here, no cats around.

I would've have taken the checked seated chairs!
I kind of like the fact you can just put anything out in London and someone will take it away

Maybe that phone booth was left on purpose to be incorporated into the design of the new incarnation of your pub! When I was a fresh out of college starving artist wannabe living in Manhattan, my roommate and I found a great little table and 2 chairs on the street. We had it for years, and she may still have it!

Cool photos! I love the Lilly Langtree sign. Every picture tells a story, don't it!

That planter looked like a sequined dress to me - ha! I can just see some blonde bombshell wearing it.

Briony: Well thanks! It helps to live in a very densely populated place where there are lots of opportunities for weirdness.

YP: Believe it or not, I know someone who's related to one of the founders of Marillion! Her brother, if I remember right. I don't think he's Fish, though. :)

Fran: Hello and thanks for commenting! I'm sure you're right about the cables. It's just weird how they're left dangling like that. Maybe there's going to be some sort of above-ground conduit installed to bring them to their eventual destination?

Red: It probably has some significance, you're right.

Sharon: But who would paint "Poison" on their own wall? Unless, as Ellen suggested, a band lived there!

Catalyst: Actually, it's kind of a dump. We went there once after work. The carpeting looks like it hasn't been cleaned since about 1972.

E: Olga has found cats on top of that fence before. Fortunately, none that day!

John: I hope someone takes them. They look perfectly fine. But I have to draw the line somewhere!

Sue: Excellent! I love that you and your friend gave those items another life. People can be so wasteful.

Robin: The new sign DOES look much better. I hope they put some work into the interior of the pub, too!

Bug: Ha! It DOES look vaguely like something Marilyn Monroe (or Stormy Daniels?) might wear to sing Happy Birthday to the president.

Dreamy reflections, ha! And maybe that phone booth is the secret entry way to the Ministry of Magic in Harry Potter! It looks just like the phone booth in the movie. It gets easier and easier to just carry your iPhone to take pictures doesn't it? I have been completely seduced.