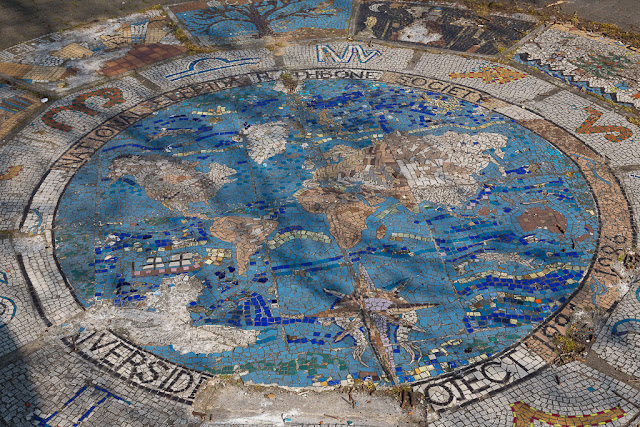 Remember how I said I was going to start walking the Capital Ring, a 78-mile circular path around the city? Well, I began yesterday!

You may remember that I finished walking a much longer circuit, the London Outer Orbital Path or LOOP Walk, late last spring. That walk sits roughly at the outer boundaries of London's boroughs. The Capital Ring, on the other hand, is more urban, and divided into 15 segments. I did two of them yesterday, from Woolwich on the Thames in southeast London to the residential neighborhood of Grove Park -- about 11 miles.

The walk started along the Thames, where I found this degraded but still interesting mosaic (above) on the riverfront path. 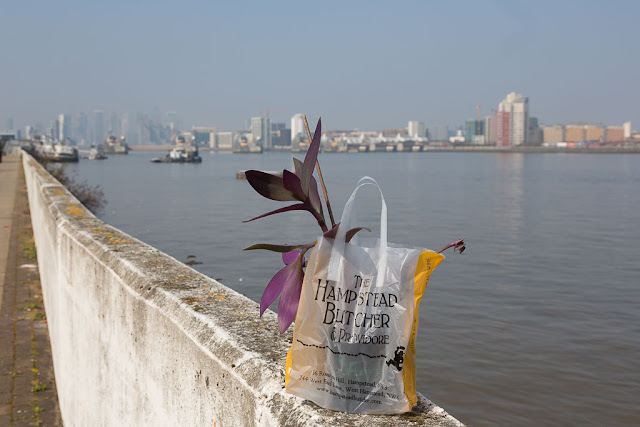 The walk took me right past my friend Sally's front door, in Charlton. So I brought along a houseplant I've been meaning to give her -- a rooted cutting from my purple heart plant. Carrying it was a major pain but fortunately Sally's house was close to the walk's starting point, so I dropped it off early on. (Not before showing it the Thames!) 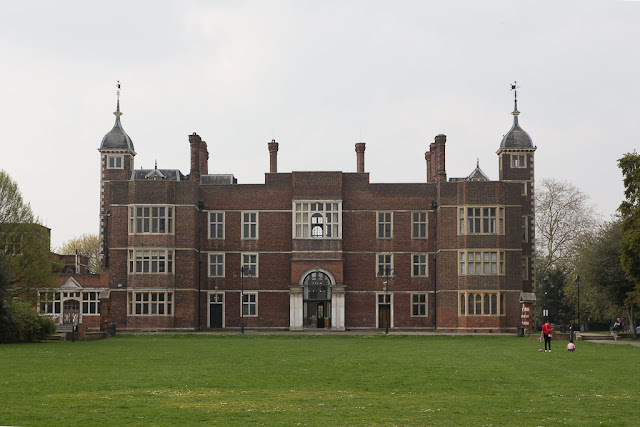 I grabbed a coffee and a piece of banana bread at a cafe in Charlton Park, where tons of people were out playing football. I passed Charlton House, built in 1612 and "one of the best examples of Jacobean architecture left in London," according to my map. 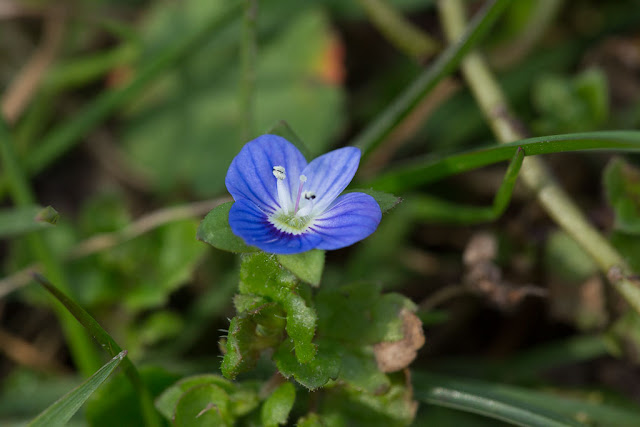 Along the route I saw lots of these tiny blue flowers -- I believe they're speedwell. I also saw bluebells, wood anemone and lots of other blossoms. It was smart to begin walking in spring! 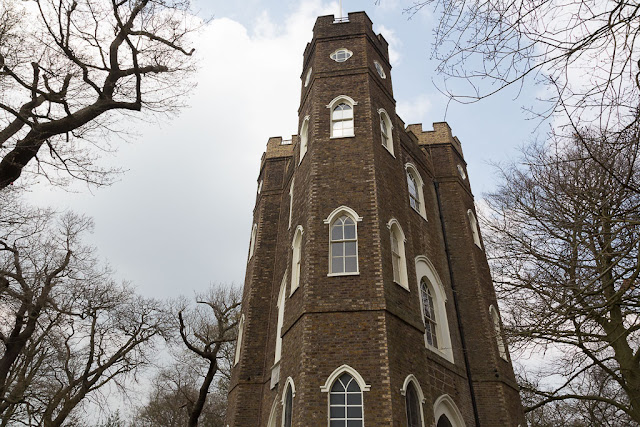 In Castle Wood, part of Oxleas Woodlands, I passed Severndroog Castle, a weird triangular structure built to honor the land's prior owner, Commodore Sir William James. James worked for the British East India Company, and the castle was built by his widow after he died in 1784.

I didn't go inside, but there's a little cafe at the base.

I also passed Eltham Palace, where I went with Sally years ago, but it's not open on Saturdays so I couldn't actually visit. 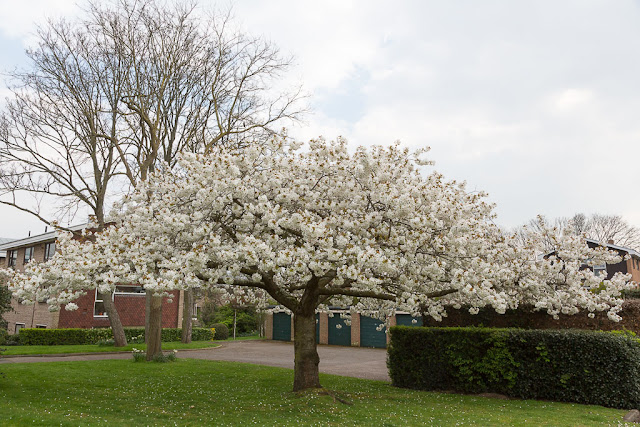 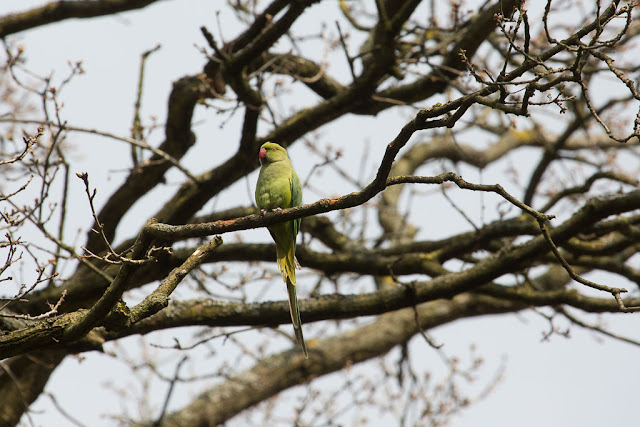 The Oxleas Wood was full of chattering, screeching parakeets. They're beautiful but they sure make a racket. 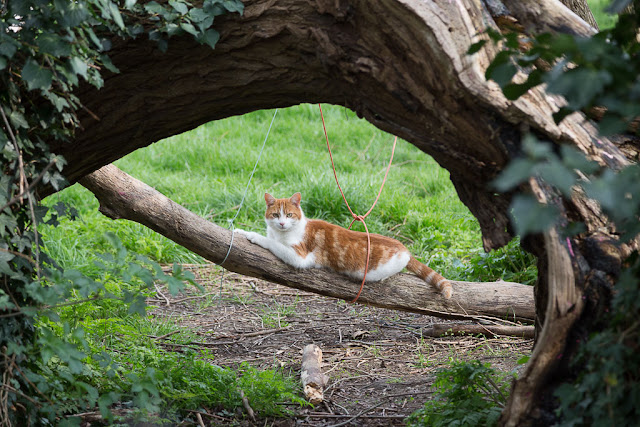 I passed this cat, lying on a log sharpening its claws. It looks like it's restrained, but I think it's actually just lying inside that loop of twine. It was a very weird scenario. Cats are weird. 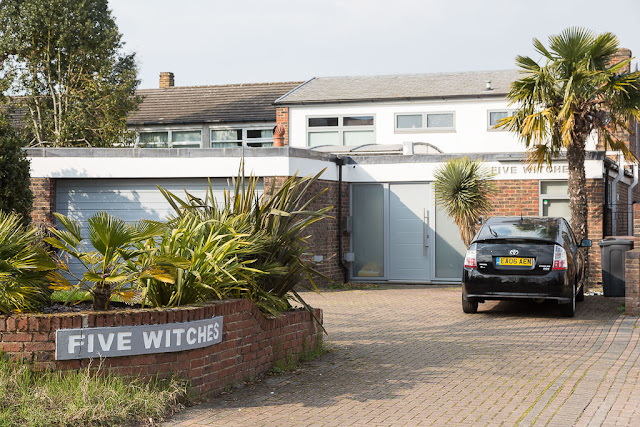 And speaking of weird -- isn't "Five Witches" a great name for a house?

By the time I got to Grove Park my feet were pretty sore -- I'm out of practice at walking such distances! The Capital Ring seems busier than the LOOP. I was often all alone on the LOOP but I was seldom alone on the Ring yesterday, with other walkers usually visible either in front of or behind me. It will be interesting to see whether that phenomenon holds true for the entire route.
Posted by Steve Reed at 7:22 AM