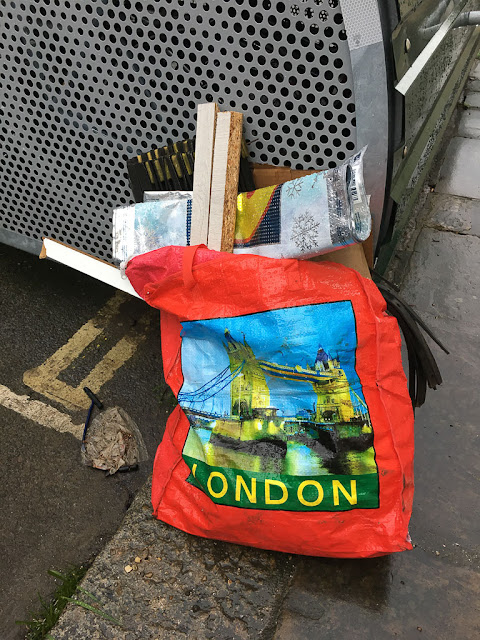 Gosh, am I stuck in a rut or what? More pictures of trash on the street... 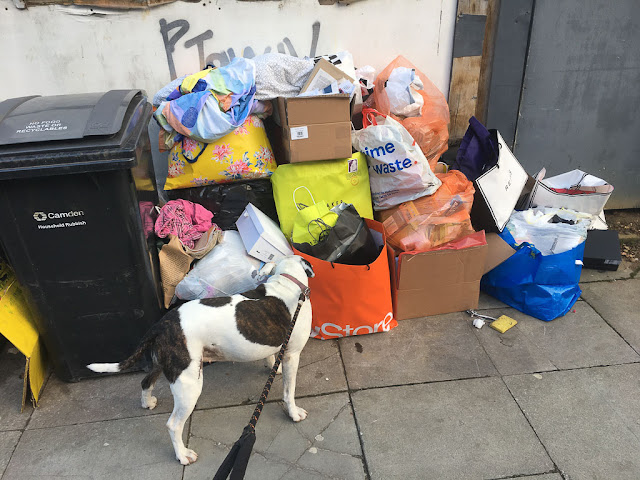 It's very colorful trash, though, so that's something.

It's my plan to get our seeds planted this weekend. I've purchased a stack of seed trays -- with compartments, this time, which I hope will spare me the painstaking task of later picking apart and transplanting tiny individual seedlings. Hopefully, in compartmented trays, I can let them get a little bigger before I move them as small plants.

Anyway, I need to get to Homebase and buy more seedling compost, but otherwise I'm ready to roll. That should give the plants several weeks of indoor growing time before they get moved outside in late April or early May.

It's been deadly dull at work these past few days. A bunch of kids are gone on school trips so there's not much activity in the library. I've just been reading a lot. The New Yorker's new article on Fox News and its transition into a propaganda machine for the White House is fascinating and, at times, jaw-dropping!

Oh, and in case you're wondering what's happening with Brexit, well -- we are too. With 21 days left in the European Union, Britain still has no plan. Parliament seems deadlocked in debate and argument. I imagine something will happen at the last minute to spare us a no-deal Brexit, which everyone agrees would be economically disastrous. I think the negotiators are playing their cards close to their vests as the clock winds down. What a nightmare this all must be for manufacturers.
Posted by Steve Reed at 6:30 AM

I wish I had a job where I got paid for reading, internet surfing and ordering seeds. You are one lucky guy Steve!

Brexit has an uncanny resemblance to some of the more awful soap operas on TV. Most of us are glued to our screens to see what happens next as the whole plot twists and turns. In a word, ghastly.

For about 10 seconds I fantasized about planting my own seedlings but then I realized that I have nowhere to grow seedlings - at least nowhere with enough light. Ms. Pinky the Pet Geranium is taking up All the Light these days...

I was just thinking about how you must be getting ready to plant things.
I need to do the same but in my case, I need to just get the seeds in the ground.
London does have some interesting trash.
I'm so behind on my New Yorkers.

PBS Newshour did a piece on the effects of Brexit on Northern Ireland last night. Needless to say, the prospects weren't good. I'll have to look for that article you mentioned. From what I can tell, Fox News is pulling Trump's strings on pretty much every issue. I used to think Sean Hannity was a bad joke. Now he's running the government.
That is a LOT of garbage to find on the street.

Good idea to get those plants started early. I used to start my plants at school because I don't have a good place in the house . south facing windows are not available.

The thing that most amazed me about Portugal is that I did not see one scrap of trash on the streets the whole time I was there. what happened to the rumor of another vote? they should just vote again.

I hope you find this funny, but I think of you now whenever I pass a pile of trash on the street. LOL! I find the state of the world to be as dismaying as it's ever been. It blows my mind on a daily basis. Nothing makes sense except planting seeds for the future.

Do you think Brexit won't go through in the end, that the original vote (which was possibly tampered with!) will be reversed?

I can only presume that Sharon (above) was not comparing Hannity and Trump to garbage on the street. Could we ever be that lucky? And yes, Brexit looks to take Northern Ireland back to the Troubles. Tragic. I think I would have picked up that "London" backpack or tote or whatever it is.

I read an article on the New York Times piece, and although it didn't surprise me, it did fill me with dismay. Now I need to read the actual piece.

We're having our own troubles federally in Canada. There is no place to hide from the news!

p.s. i made my blog private for work reasons. if you have trouble accessing it please email me and let me know!