A Ghost Blob and Social Media 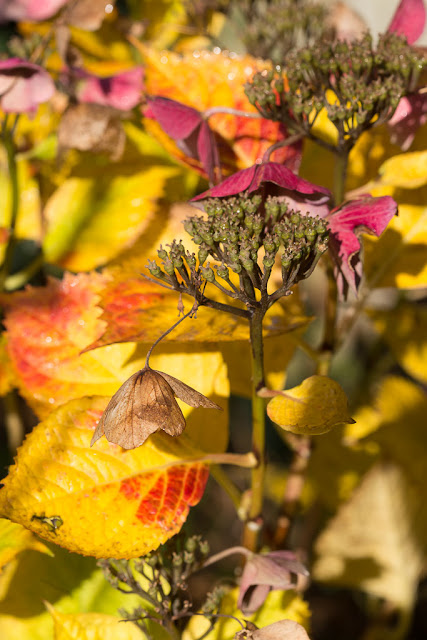 The hydrangeas near our patio have gone the most beautiful shade of yellow, with bits of red and purple still in the flowers and in patches on the leaves. I noticed them the other day when the sun was shining. That really brought out the color.

I believe yesterday was the busiest day I've ever had in the library. The high school is on a weird schedule this week, which gives students a lot of free time -- allegedly to study and meet with teachers at the end of term, but of course many of them spend it hanging out. We also have classes coming in to select books for the upcoming break, in addition to the usual stream of kids seeking computer chargers, headphones and calculators. At around noon I joked with my co-worker: "I've been so busy I haven't even had a chance to read the paper! It's an outrage!"

I also worked an early shift, because the library was closed for an event in the afternoon. I had to go in at 7:30 a.m., which meant Olga didn't get her morning walk. I asked Dave to do it, because he was staying home for a doctor's appointment, but he texted me later saying Olga refused to go. "Olga is a moody bitch," he said. "She walked about two feet and froze. Wouldn't go any further. Neighbors laughed at me. LOL" Maybe she objected because she usually walks with me. Who knows.

For dinner I managed to finish off the last of my mom's baked sweet potato recipe from Thanksgiving -- the last of our holiday leftovers, I believe. (They were in the freezer for part of the time.) We still have some frozen holiday bread but we aren't in any rush to eat that. 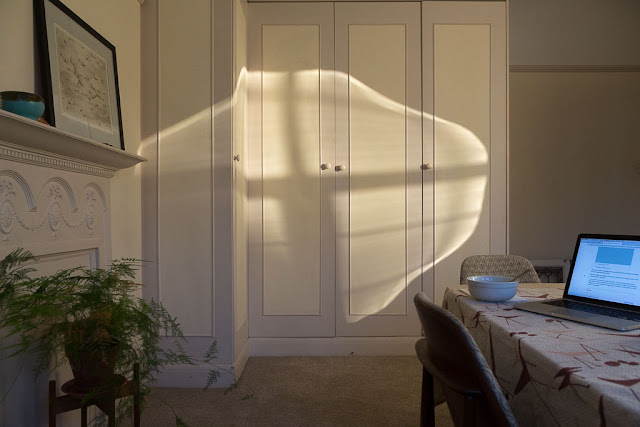 I was eating breakfast a few days ago when I noticed this weird reflection on the closets in the dining room. It's sunlight coming through the window (hence the grid of shadows) and then reflecting off a big Plexiglass-covered picture on the other side of the room. Looks kind of supernatural, doesn't it? No wonder our ancestors believed in ghosts and spirits, with weird things like this happening. (Of course, they didn't have Plexiglass, so maybe things exactly like this weren't happening -- but surely they saw an occasional weird reflection.)

For years now, I've been in an e-mail group maintained by the Zen Buddhist center I used to attend in New York. I haven't been to the Zendo in about a decade, but I stayed in the group just to keep up on news about the organization and people I know there. Lately, though, I've been chafing at the quantity of e-mail I get -- a lot of it inconsequential. The other day, someone sent an e-mail marked "Test," and about 20 people responded with jokes and remarks, and I thought, "You know, I no longer need this in my life." So I unsubscribed. I feel weird about it, because the Zendo was a huge part of my life in New York, but we all move on, don't we?

Social Media in general creates a kind of forced connection -- you might friend someone on Facebook because you work with them or know them slightly, and then years later you're still bonded to them, even though you've both moved on to other jobs and cities and in the natural world you'd probably never speak to them again. It's not that you dislike them -- you're just not that close. You're erstwhile acquaintances at best. And I don't know about you, but I feel weird about the prospect of unfriending people. I don't want to seem rude or mean-spirited. So I'm Facebook "friends" with maybe 100 people I barely know anymore. It's bizarre. I've told Dave I feel like I'm fated to drag these people around for the rest of my life. He thinks it's funny that I feel weighed down by this, but I do. Do you ever "prune" your social media contacts? How do you manage it?
Posted by Steve Reed at 7:04 AM