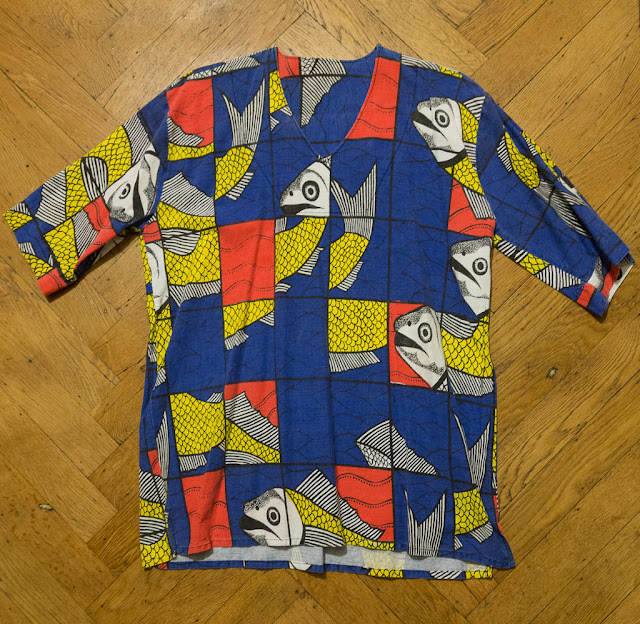 The other day I was in the Oxfam charity shop in St. John's Wood, buying a Christmas card for my nieces, when I came across a book called "Worn Stories" by Emily Spivack. It contains a series of essays by writers including Susan Orlean, Piper Kerman, Greta Gerwig and Simon Doonan, each of whom chose a significant piece of clothing from their wardrobe and told its backstory. Each essay appears with a simple picture of the clothing in question.

Reading the book -- and subsequently buying it, for £4.99 -- made me think immediately of my fish shirt.

So here's my own Worn Story.

I bought my fish shirt in early October, 1994. Well, I say I bought it, but actually, I had it made. I was traveling through West Africa with some friends from the Peace Corps, and we'd stopped for a few days in Bobo Dioulasso, Burkina Faso. I'd been on the lookout for some colorful African cloth to get a garment made, and in the market there, I found this crazy fabric decorated with big, wild-eyed carp. I loved how silly it was. There was no pretension to good taste. 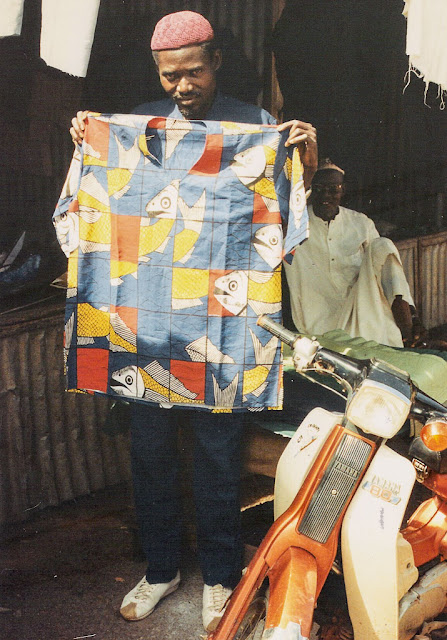 I bought a segment -- I don't remember how much cloth or what I paid -- and I took it to a tailor. He measured me and in short order produced this simple shirt, with a V-neck and two little vents at the sides. I took his picture afterwards, and promised to mail him a copy.

(Which I did, once I got back to the states and got the film developed -- but then I discarded his name and address, so I can no longer give him credit.)

In my journal at the time, I wrote:


"I got a shirt made in Bobo – it’s really HIDEOUS. It’s made from a pagne fabric with big fish all over it. I don’t know what possessed me – I can’t believe I’ll ever wear it unless I’m at the beach or something. Now I have TWO outfits I’ll never wear. I need to get a nice shirt made sometime – maybe in Ghana."

The other outfit I was sure I'd never wear was a Grand Boubou, or African robe-and-pants set, that I bought in Mali. I definitely never wore that, and wound up selling it ten years later on eBay to someone in Australia, of all places. And although I did have a "nice" shirt made in Ghana, of a streaky blue and black batik fabric, I wore it for a few years before it faded and I gave it away to Goodwill. 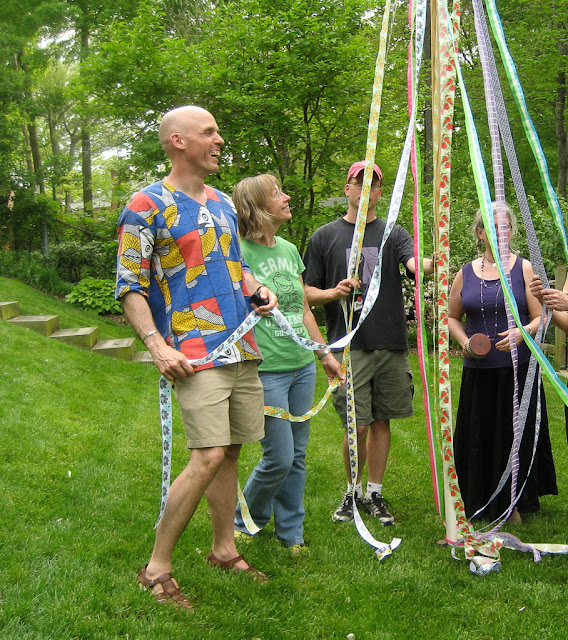 I still have the fish shirt, though. It's actually pretty fun to wear. I've worn it several times to barbecues or parties, like a gathering of bloggers I attended in 2008 in Washington, D.C. where we celebrated May Day with a maypole (above). I still take it out now and then and wear it when I'm walking around town on a warm summer day. It never fails to attract attention!
Posted by Steve Reed at 8:04 AM