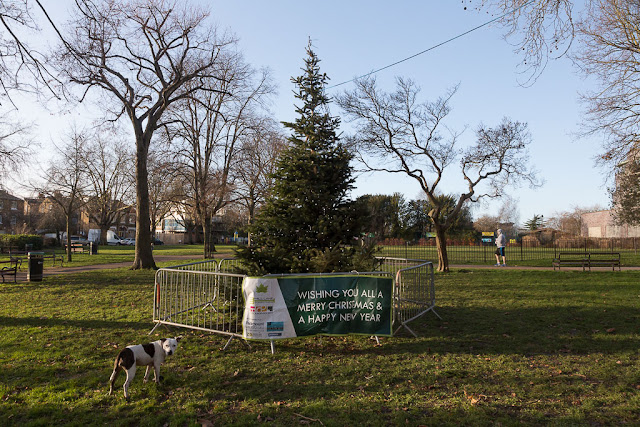 Olga and I walked up to Fortune Green yesterday, where we checked out the Christmas tree. It's nice, but like last year, it's surrounded by rather unsightly barriers. This seems a little extreme -- health and safety run amok -- but what do I know?

We also gave Olga half a scone yesterday morning. It was made with dried fruit, and I expected her to wolf it down -- and she did, except for a single sour cherry that she just could not bring herself to swallow. She'd spit it out, look at it, pick it up and bite it a few times, spit it out again. It was really funny to watch. I eventually threw it out the back door, much to her relief.

In general, Olga doesn't like pickled things, anything extremely spicy or anything lemony. I guess the sour cherry fell somewhere on that spectrum. 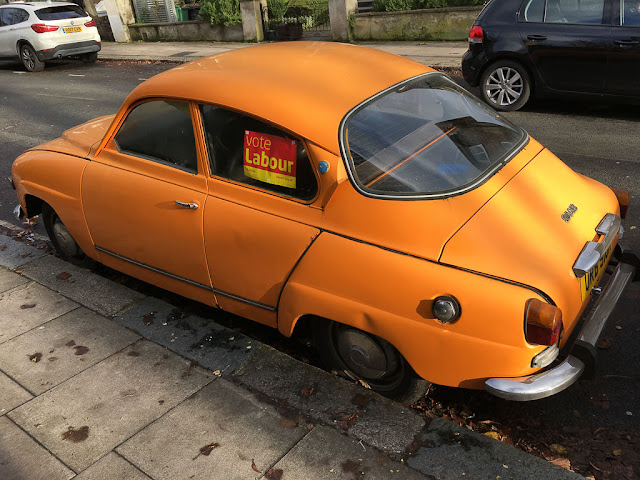 I've photographed this car before, but I liked the color-coordinated election sign. Too little too late, but oh well.

Otherwise, yesterday was pretty quiet. I stayed home most of the day, did laundry and vacuumed. I also made good progress in "David Copperfield," which I'm really enjoying. It's essentially a soap opera, but Dickens paints a vivid portrait of life in his time, and he is a master of character creation. I'd like to finish it before we leave for Egypt (in a week!) because it's a big ol' hardback book and I'd rather not schlep it up the Nile.

Oh, and about yesterday's post -- yes, of course, that second animal is a sheep. I don't readily know my sheep from my goats, at least not when they're carved in stone.
Posted by Steve Reed at 6:14 AM