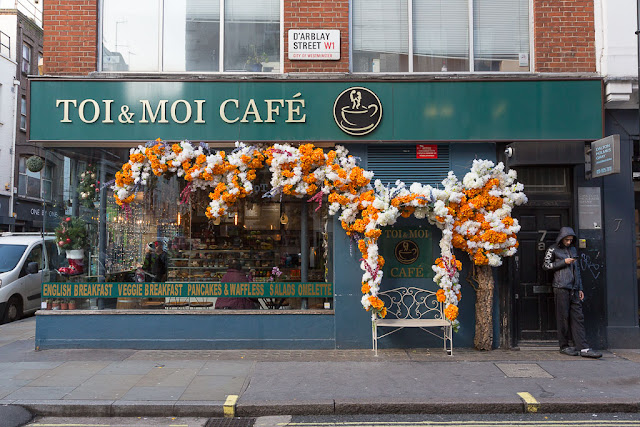 I have had the worst trouble getting out of the house on time this week. I don't know what's holding me back, but I often find myself locking the front door at almost 9 o'clock, and I'm supposed to be at work at 9:15. Which means a stuffy tube ride rather than a nice walk to work, and arrival five minutes late anyway.

And I need to walk to work. Especially after this week, when we've been gorging ourselves on Thanksgiving food. Dave and I have finally worked through many of the leftovers -- we have a smidgen of mashed potatoes left, and I pulled our sweet potatoes out of the freezer to begin working on those. But the turkey, stuffing, pie and vegetables are gone. Thank God.

I also need to walk because while I do, I listen to podcasts, and right now I'm listening to the craziest story -- called "Joe Exotic," about a guy in Oklahoma who ran a private zoo, married two husbands simultaneously, and is accused of arranging the murder of a critical animal rights activist. Both he and the animal rights activist sound like real pieces of work. Every time one of them makes a decision, I find myself exclaiming, "WHAT?!" Because they make the worst decisions in the world. 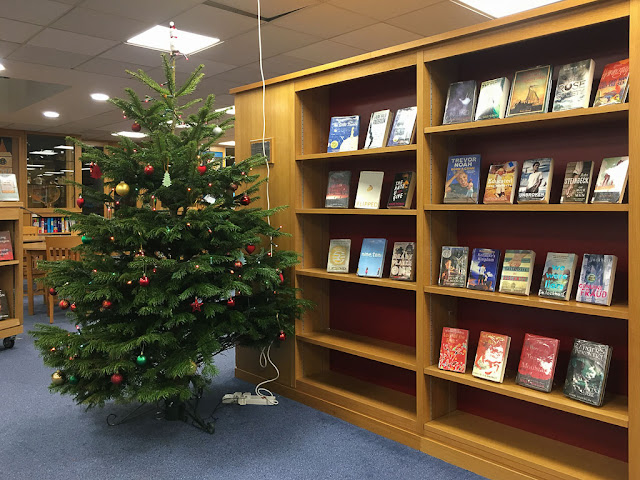 Here's our Christmas display in the library. I didn't exactly pull out all the stops, did I? The tree was delivered Monday and I grudgingly decorated it right away (because we only have about a week of school left, plus some additional professional development days) but I just used lights and a smattering of baubles. One of the librarians is asking middle school students to write the names of their favorite books on little tree-shaped cards, and we're hanging those from the tree and putting the books up on the adjacent shelves.

I suppose I'll be hauling the Christmas sweater out of storage, too. I've worn that thing for five years, although the blinking lights no longer work. No one can accuse me of not making it last! (Look how tiny our avocado tree is in that linked video. It's as tall as the ceiling now.) What's scary, though, is that the sweater (or "jumper," as the British say) can't be washed. Since I only wear it one or two days a year, outside my normal clothes, that's not a problem -- it doesn't even touch my skin. But I suppose at some point I really do need to throw it out. Or maybe I can just remove the wires, since the lights no longer work, and wash it?