Christmas Preparations, Now and Then 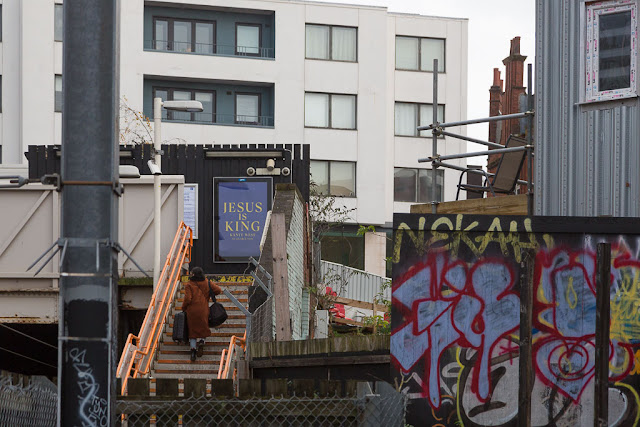 Well, I think I've got our admittedly minimalist Christmas squared away. I went online yesterday and ordered some new shirts for Dave, and I walked to a nearby kitchen supply store and bought him a gift card. I've found with kitchen stuff it's much better if Dave chooses his own -- he knows what he needs, and inevitably whatever I buy doesn't get used much. (Anyone want a ten-year-old crepe pan, still in the box, or a Le Creuset fondue set? Like new!)

I've also mailed a gift card to my nieces. And I bought bottles of wine for my library co-workers, which I didn't even have the chance to give them in person because everyone was locked up in training sessions Monday and Tuesday. I just left the bottles on their desks.

And that's pretty much it. There's no cooking, since Dave and I will be gone. There's no decorating to speak of. Christmas is much easier when kids aren't part of the picture! Adults -- especially adults who know me -- have low expectations. 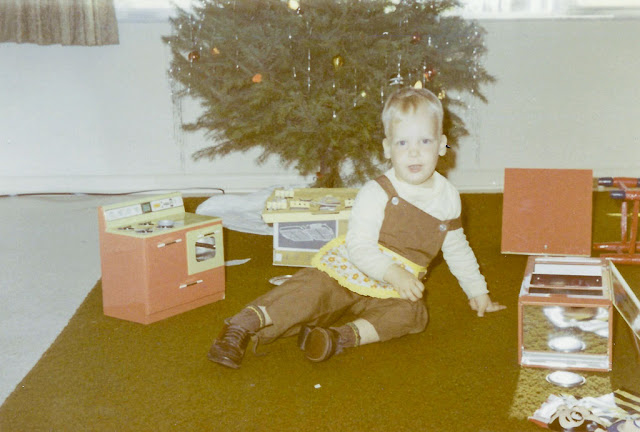 I feel like I grew up with relatively simple Christmases, although that probably just betrays my ignorance of how much work my parents put into them. I'm three years old in this picture. My nursery school had a "kitchen corner" with toy appliances that I loved, so my parents bought me some. Don't you love my little flowered apron?

Anyway, even then, as you can see looking at that tree, there wasn't a great deal of decorating going
on.

After my parents divorced, my mom, brother and I used to spend Christmas at my grandmother's house in Maryland. She was also into keeping Christmas simple. We'd put up a little artificial tree, a couple of feet high, in her living room, and we'd all buy each other one or two presents. We had Christmas dinner at my uncle's, where the holiday tended to be more of a production, and my dad and stepfamily always put up a big ol' tree at their house and had lots of presents. I liked our little Maryland tree and our quiet evenings just sitting around talking, but I confess that if I wanted something specific as a gift, I knew to ask my dad and stepmother -- they were much more likely to come through.

After my grandmother died in 1989, by which time I was living on my own, Christmases at my mom's in Florida were fairly simple too. Once or twice my brother went out just before the holiday and bought a half-price tree, but most years we didn't bother. We had a single strand of colored lights we used to put up along the roofline at the front of the house, and they were so old we joked they might burn the place down. We gave each other a couple of gifts, my mom made a special dinner, we did all the cleanup, and that was that.

I don't know how holidays in our culture turned into such a crazy production.

(Photo: A city view near the overground train station not far from our flat. The poster looks like a religious message, but it's actually an advertisement for a Kanye West album.)
Posted by Steve Reed at 7:03 AM