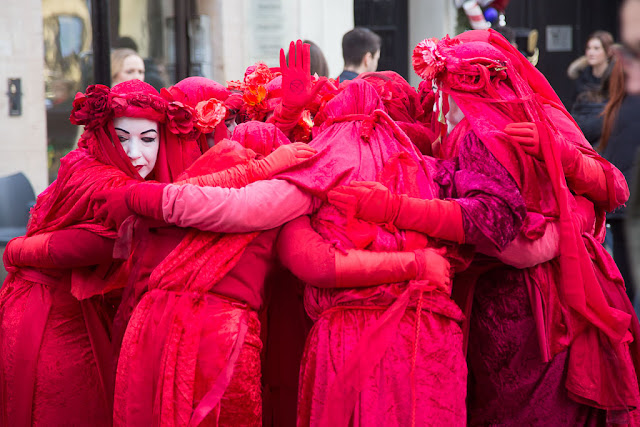 When I was in Soho on Friday, I came across this group of performers -- I wasn't sure what else to call them -- huddled on Argyll Street. Some police officers were standing nearby, and I heard one say to the others, "Our job is to keep an eye on them," pointing to the red-robed group.

I had a feeling they were somehow associated with Extinction Rebellion, the movement that has been holding demonstrations and paralyzing parts of London this summer and fall. That was confirmed when one of the group held up her hand, and I saw that it was marked with the extinction symbol (in the center of the photo).

Turns out they're known as the Red Brigade, a street performance group from Bristol. (Lots more pictures here, along with a rather dismissively toned article.) I thought they were quite remarkable looking, and they certainly must attract attention to the cause. 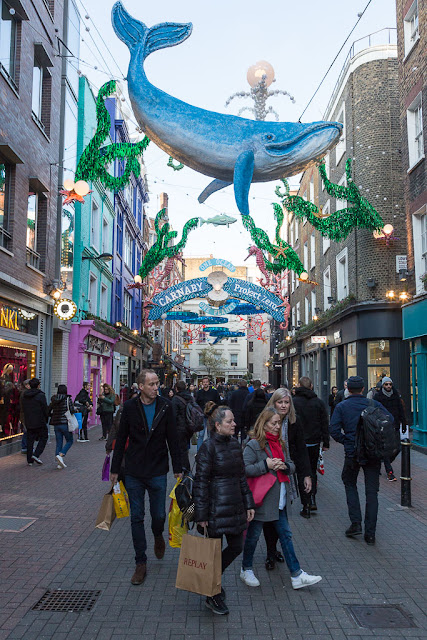 Coincidentally -- or maybe not -- nearby Carnaby Street now has a marine ecology-themed display going on for its Christmas shopping season. The display is allegedly ecologically friendly, though according to their "sustainability document" elements are made of polystyrene and polypropylene, which sounds dubious to me. Doesn't it seem ironic to put the health of the ocean center-stage on a street devoted to consumption? What would make the ocean healthier, it seems to me, is less shopping. 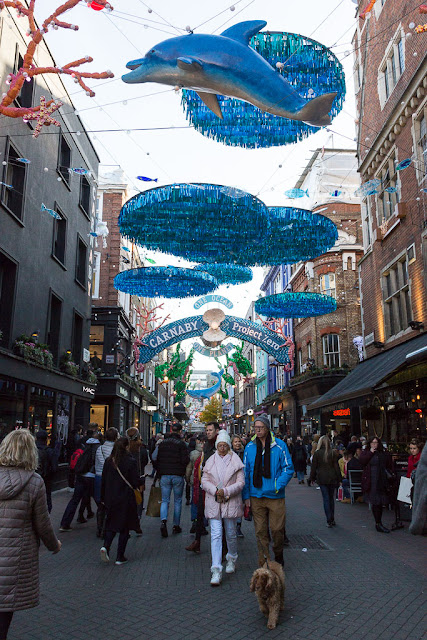 But it is an artistically interesting display, with jellyfish made of post-consumer bubble wrap and recyclable fabric, joined by other critters like seahorses, worms, fish and squid. Not to mention a whale made of polystyrene, steel, hessian, latex and biodegradable paint.

Never a dull moment on a nice day in London!
Posted by Steve Reed at 7:05 AM