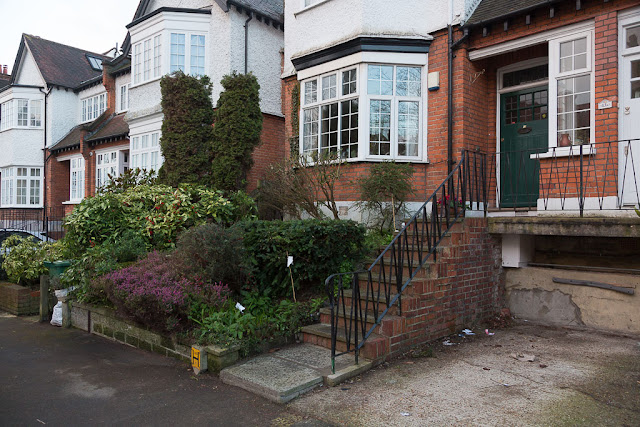 Some maintenance guys from our management company have been doing exterior work on our flat, repairing the front steps, putting in a new garden gate and trimming the front garden. This is the garden now -- much less bushy than it was previously.

The biggest change is the tall cypresses, which they lopped off about halfway up the trunk. Apparently this is an accepted method of trimming them, although it seems brutal. It will make Mrs. Kravitz happy -- she's been complaining about their height. (Maybe it will make up for the fact that we're not putting in a new side fence, which she also wants.)

See those sticks with the little white flags on them? Those are markers I put in to alert the gardeners to plants we want to save. I was afraid they were going to weed everything and inadvertently pull up the valerian and other good stuff. As it turns out, they didn't weed at all -- at least, not yet. I think they're coming back today to do a little more work on our side alley.

And as it turns out, we'll be home, because we've had a last-minute change of plans to our workday. One of our students' parents has tested positive for Covid-19. As a result, school is closed today for a "deep clean," even though the parent hadn't recently been on campus. (Obviously his kids have been.)

I'm going to use the opportunity to plant our foxgloves and do some other stuff in the garden.

Just for fun, Dave and I rented and watched "Contagion" last night -- Steven Soderbergh's 2011 movie about a mutant virus that causes a disastrous pandemic. We saw it in the theater when it came out, and I remember liking it. Thankfully, our real-world virus is nowhere near as deadly as the one in the film, which wipes out huge numbers of people in grisly fashion!
Posted by Steve Reed at 6:04 AM