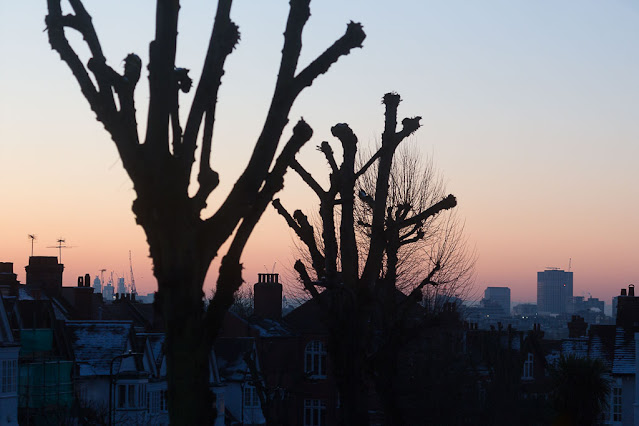 I took this photo of yesterday's sunrise out our dining room window. The buildings on the right-hand side in the distance are located near Paddington Station; the ones on the left, with the construction cranes, are way down on the Thames. It looks like there's been quite a bit of construction in that area since I last wrote about this view.

Yesterday morning was icy as heck. The snow melted just enough on Sunday afternoon to create a liquid slush that then froze solid overnight. I felt like I needed crampons on my walk to work. Fortunately I managed not to fall on my butt.

I've worked out a plan with my boss to come in only on Mondays, Wednesdays and Fridays. As long as we're in lockdown and there are no students in the building, I'm certainly not needed on campus more than that. In fact it remains to be seen whether there will be enough for me to do even three days a week. Today I'll be working from home. 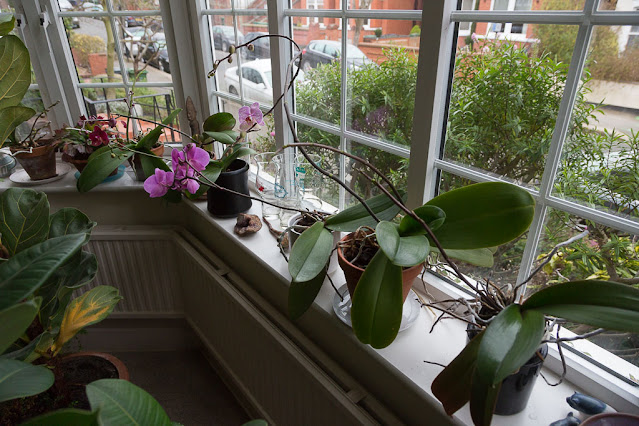 I mentioned the other day that our orchids are blooming. Here's what they look like -- the ones on our front windowsill, anyway. As you can see, we have several flowers, but we have even more flower stalks. In another month or so all those long, whiplike stems should be bearing blossoms. (I took this photo on Sunday morning just before our snowfall, hence, no snow on the street.)

Has anyone noticed that Blogger's quick-edit tools have returned? As I mentioned the other day, the little pencil on blog posts and the crossed tools that allow us to quickly edit items in our sidebars had disappeared. Well, I guess enough of us complained, because they're back again. Thank goodness. (You won't see these as a reader, only as a blogger.)

We continue to be bewildered by the ever-evolving Covid-19 vaccination schedules in the UK. Dave and I used to be at tier 5 and 6 on the priority list, but apparently the list has been subdivided more. Now I'm on tier 9, and Dave, I believe, is on tier 6 as someone being treated for an autoimmune disease (Crohn's). Neither of us have heard a peep about vaccinations, but that's to be expected as they're still working on the highest priority groups. Boris says everyone in the first four groups (basically people 70 and older, and those with serious illnesses or disorders) should be vaccinated by mid-February. I'm sure I'm looking at spring, at least, and possibly even later.
Posted by Steve Reed at 6:59 AM