Bleecker and Mulberry, May 2007 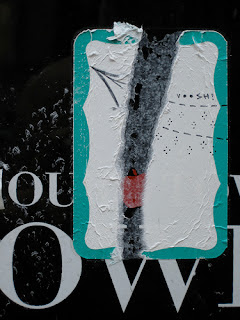 For me, one of the main appeals of street art is its transience. I like the art even more when it's been outside for a while, and it's weathered and faded and maybe even torn - like this sticker by Bloke, who you may remember specializes in art of paper airplanes.

The Japanese have an aesthetic concept called wabi-sabi which basically appreciates the beauty of imperfection. Bloke's sticker embodies this aesthetic, I think.

People are likewise beautiful in their imperfection. As one of my fellow Zen students said in a talk recently, how boring we would be if we were all perfect little automatons. Instead we've suffered our own weathering, our torn and frayed edges, and those make us more interesting.

Which is my long way of saying I wish I'd been more temperate in my post yesterday about Jerry Falwell. I'm not really happy that the man died. Instead, I feel more like a kid who's been bullied for a long time and suddenly awakens to find the bully has moved away. And I don't think Falwell meant to be a bully - I don't think he entirely understood how hurtful he was being.

I actually wrestled with taking down yesterday's post entirely. But I decided to leave it up, even though I felt it was a little extreme. After all, I'm just as imperfect as Jerry Falwell was.
Posted by Steve Reed at 11:19 AM