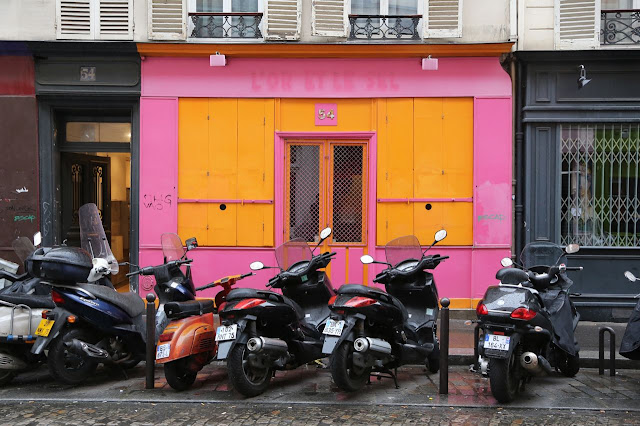 We're back in London, and back with Olga, who is none the worse for wear after her five days at the kennel. She's just as bouncy as ever. In fact she nearly went berserk when she saw me and Dave -- she jumped up and knocked her teeth against my face, giving me a bloody lip. Crazy dog!

Our final morning in Paris was rainy, and I spent it wandering around Montmartre, taking photos of the street art and interesting establishments like the one above, which appears to have been called "The Gold and The Salt" before it went out of business. Maybe that name was just a bit too abstract. Or maybe it's moved somewhere else and is prospering. Who knows?

I debated going out to La Defense, the skyscraper district, to see the ultra-modern Grand Arche and a part of Paris I have never experienced. But given the weather I was not inspired. It will have to wait until next time. It's always good to leave a few things undone.

Today is general cleanup and recovery, and continuing to catch up on my magazines. (I did very little of that in Paris -- who goes to Paris to read magazines?) I did read a fascinating article in The New Yorker from March 18 about the wisdom of allowing transgender children to take permanent steps toward gender reassignment before they are 18. Some people argue that delaying puberty, administering hormones early and even performing some surgeries can help smooth the transition, while others say children are too young at that age to know what they really want. According to the article, long-term studies show that only 15 percent of gender-dysphoric children continue to have those feelings as adults, though many of them prove to be gay or bisexual. "In other words," writes journalist Margaret Talbot, "many young kids claiming to be stuck in the wrong body may simply be trying to process their emerging homosexual desires."

I can vouch for this first-hand. I clearly remember in elementary school fantasizing about being a girl, and continuing for years to envy girls their relative maturity, their flexibility in fashion and other attributes. Had I been asked at the time about my inner gender, I'm not sure what I would have said. But this was my emerging identity as a gay man; as an adult, I do not want to be a woman. Then again, I'm not transgender, and I suppose transgendered people might argue that while my fantasies were just that, they experience a stronger awareness of a different identity. It's a fascinating subject, as is the fluidity with which many younger people approach the issues of gender and sexuality.
Posted by Steve Reed at 6:47 AM