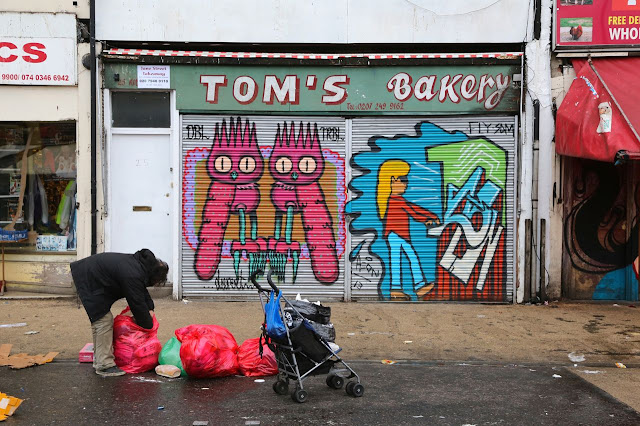 Well, things are returning to normal around here. I've done a couple of loads of laundry, took Olga on a long walk, and braved reopening my work e-mail after a couple of weeks off. Last night, I started rounding up substitute teachers for next week. Back on the horse, as they say.

Olga managed to terrify a woman (in complete head-to-toe Muslim hejab) and her little girl yesterday. It was so embarrassing. We were walking through a bunch of other pedestrians on Ladbroke Grove when Olga spotted a pigeon and shot toward it, diving between the woman and the girl. Olga then cut back toward me, wrapping her leash around the girl. Both of them were gasping and frantic. I untangled Olga and apologized profusely, pointing out that the dog was just going after the bird. The woman seemed to accept that, and I got the heck out of there. I'm glad the father wasn't around. (Muslims in general do not particularly like dogs, which they consider unclean. Olga isn't unclean, just impulsive!)

Dave and I watched a documentary last night called "Collapse," outlining the peak-oil, doomsday projections of a guy named Michael Ruppert. It was an interesting movie, though I'm a bit perplexed why Ruppert -- of all people -- deserves to be put in such a spotlight. I think some of what he's saying is being said by others with more credentials, in a more balanced way. (He argues that because we're running out of oil, the globe is headed for a period of sudden decline and starvation.) Listening to Ruppert is a little like listening to some old guy in a trailer park who's stocking up on bottled water and burying gold coins to offset the coming apocalypse.

I don't exactly disbelieve him, but I also don't think stockpiling gold and self-propagating seeds (as Ruppert recommends) and other goods is the answer. I don't see decline as such an immediate, rapid event. I think we'll have to adapt as it occurs, because who knows what will happen or when? Maybe we'll eat more locally, consume less, surrender our luxuries, lose access to high-level medical care, have fewer children. Farm in our backyards. (Or on our balconies -- ha!) After all, much of our energy use now is essentially waste. When that's scaled back -- inevitably as prices rise -- we ought to have time to adjust.

(Photo: A guy collecting discarded bread from a bakery in Hackney.)
Posted by Steve Reed at 7:55 AM