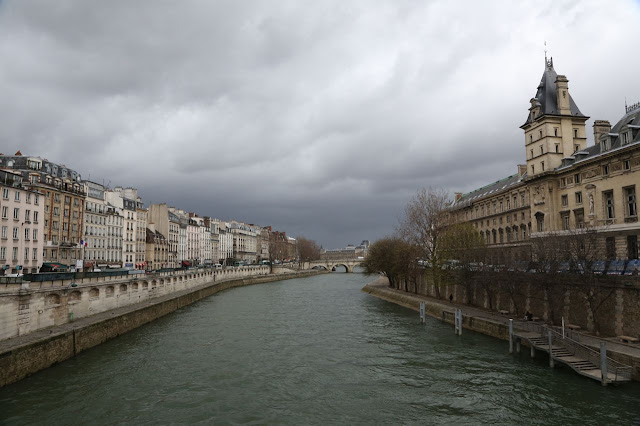 We experienced a deluge yesterday when the skies over Paris grew stormy. Fortunately, Dave and I were camped out beneath the awning of Cafe Lutece the time, so we had a dry comfy spot from which to watch all the Parisians breaking out their parapluies and running for cover. It was an intense rain, too, complete with tiny peppercorn-sized hailstones. Mon Dieu!

We love cafes. It's so fun to sit and people-watch. Monday, on the Champs-Elysees, we saw a nattily-dressed gentleman dump four packets of sugar into his large orange juice. (As a Floridian, I was horrified.) And yesterday in the Marais we were sitting out on the sidewalk when we heard a racket coming up the street, and were subsequently approached by a man with wild hair and no teeth banging two aluminum pans together in a rhythm that probably meant something only to him. Fortunately he didn't hang around very long. 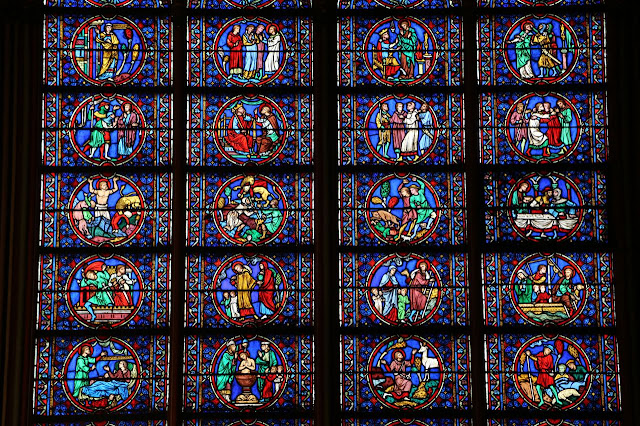 Because the weather was so bad, we decided to find an indoor activity. A museum would have been our first choice, but as luck would have it, museums are closed on Tuesday. We learned this from a security guard outside the Louvre, where virtually the only people in the vast courtyard were a knot of flag-wielding anti-gay-marriage protesters. (I joked to Dave that we should go stand in the center of their little group and make out, like Act Up. But we did not.)

Instead we went to Notre Dame, where we watched boys feeding sparrows from their hands outside before we explored the dark recesses of the 850-year-old cathedral.

Funny thing about Notre Dame: Visitors are asked (quite reasonably) to remain silent while inside. But every few minutes a voice comes over the loudspeaker to say "shhhhhh!!" and remind people in several languages to be quiet. Which kind of defeats the purpose, it seems to me. (Particularly since all that shushing brings to mind the sibilant snake from the Garden of Eden. At least, that's what came to my mind.)

Fortunately the rain didn't last all day. We were able to explore lots of the area around the Pont Neuf, Ile de la Cite and the Marais. 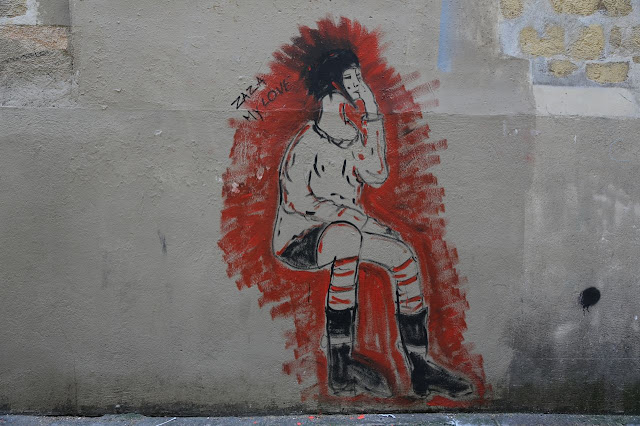 For dinner we went to a place that literally translates as "The Crazy Elbow," and who should we encounter inside but our wild toothless friend, fortunately minus his aluminum pots! He quaffed a few drinks at the bar before stepping outside to rage loudly at the world, and then he departed.

Overall, the food has been excellent, of course -- I had a croque monsieur for lunch and entrecote of beef for dinner, along with an excellent panacotta for dessert. I'm glad for all the walking!
Posted by Steve Reed at 7:24 AM