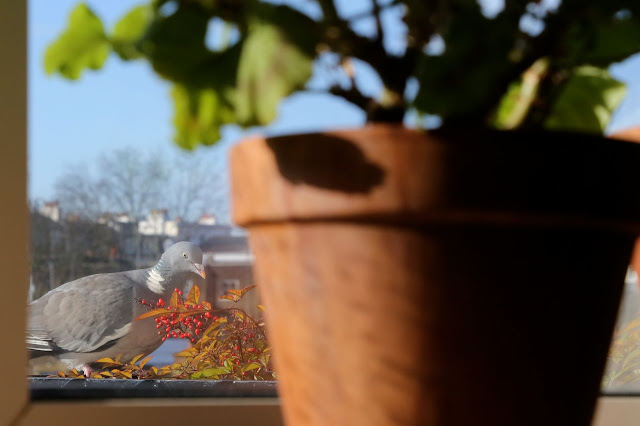 This pigeon fluttered down onto our balcony railing yesterday morning, to pick red berries from that mysterious potted plant. (The plant predates our tenancy here and I have no idea what kind it is.) Olga never saw it, which is just as well. Pigeons drive her crazy.

We didn't do much in the way of Eastery things. I was just telling Dave yesterday that all the eggs I've seen in British supermarkets have been brown, so I wonder if people even dye eggs here? I've seen no evidence of them. We were going to ask our neighbors during a planned pub outing yesterday evening, but that got postponed because our neighbor Chris wanted to watch a war movie on TV. (Besides, we'd had gin & tonics with them the day before, so that was probably enough neighborly socializing for one weekend.)

We had traditional hot cross buns yesterday morning. Then Dave made a steak dinner and a yummy plum tarte tatin, and we watched a couple of movies on iTunes ("Dances With Wolves" and "2010: The Year We Make Contact"). Our television has been out the last few days -- our receiver seems to be on the fritz. Fortunately it's still under warranty so we're going to try to get that fixed or replaced today. 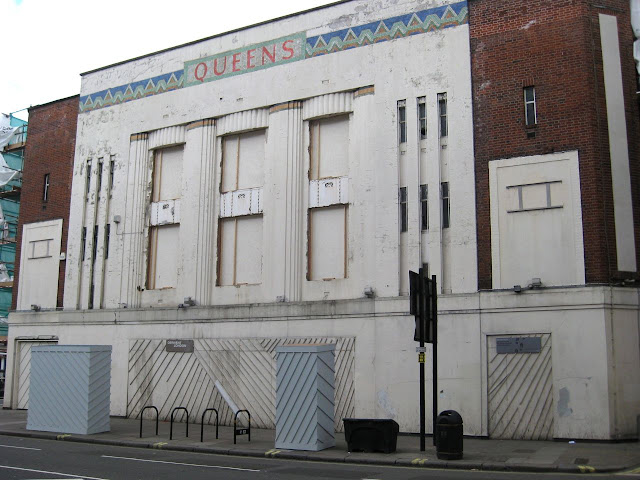 While walking near Queensway, I noticed that construction has begun on the Queens Cinema, an old movie palace near our neighborhood being transformed into ritzy condos. Since I last wrote about it a year ago, scaffolding has been erected at the sides of the building, the windows have been removed or covered and the phone boxes out front have been boarded up. Here are some architect's renderings showing what the building will look like when it's finished next year. Pretty swanky!
Posted by Steve Reed at 6:56 AM