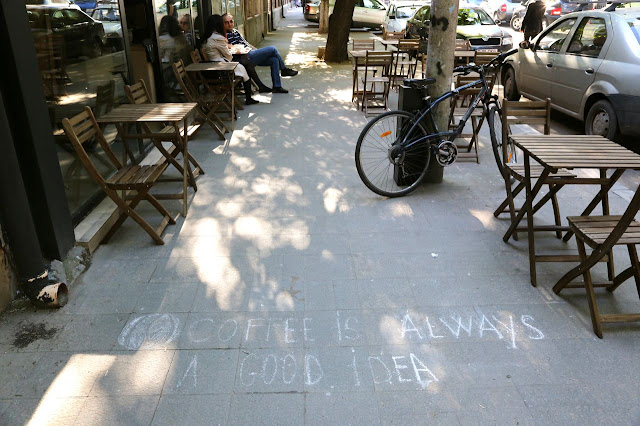 And suddenly, here I am, back in our living room with the dog rolling around on the carpet and my coffee beside me, in my Starbucks "Tampa" mug. It seems like I never left, and yet it seems like we've been gone for weeks.

Olga is none the worse for wear. She came back yesterday evening from her holiday in the country, happy but gray and stinky. I guess that's to be expected after keeping close quarters with multitudes of other dogs. We promptly bathed her, and thank goodness Dave was here to make it a two-man operation. Now every time I look at her, clean and white and well-fed, I think how much easier her life is than the lives of all those Bucharest street dogs.

Our flight back was uneventful. Early yesterday morning we collected Dave's eight kids at the school and hopped a bus for the airport, herded everyone through security and passport control and lounged around a bit with time to spare. I switch into Chaperone Mode whenever I'm around students, obsessively counting to make sure everyone is there. Dave, having chaperoned countless groups over the years, seems much less uptight about it than I am. And I can never get used to being called "Mr. Reed." I think, who is Mr. Reed?

I used my time on the plane to hack my way through a chunk of "The Golden Notebook." I am in the home stretch. So far, I am not greatly illumined. It's a much angrier book than I expected, and the characters communicate and behave in ways that seem unnecessarily harsh and frankly unbelievable. Every man in the book is a pig. Every single one. Except the gay characters, whom the author happily disparages for being "not real men."

I asked one of the teachers at the Bucharest school what the gay scene is like in Romania. He told me it's very underground, like the U.S. in the 1960s. From what I could tell there are no gay bars, and though I saw several sex shops, I didn't see any that advertised gay content. (I didn't go in and peruse the shelves, but usually they'll tack a little sign outside that says they've got it.) I suppose some of that social conservatism stems from the years under communism and the Orthodox church, but it struck me as very unusual for Europe -- and markedly different from Prague, for example.

(Photo: A sidewalk cafe in Bucharest, describing my attitude exactly.)
Posted by Steve Reed at 6:25 AM