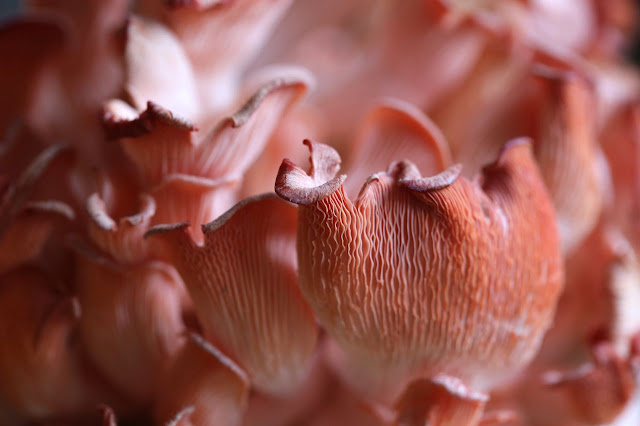 There's a guy at the Portobello Road market who sells only mushrooms. (A sign on his stall says, "No, I don't sell the magic kind.") He has the most amazing variety of mushrooms I've ever seen in one place, though admittedly I am not a mushroom aficionado.

The other day he was displaying a big bowl of what looked like pink chrysanthemums. He told me they were oyster mushrooms. Knowing Dave loves mushrooms, and knowing his desire for new cooking challenges, I bought some. I also picked up a few British beech mushrooms which, unfortunately, were not nearly as photogenic. 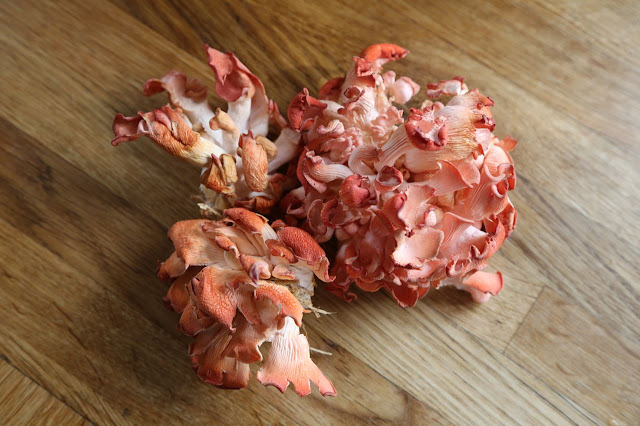 Last night Dave cooked these mushrooms into a chorizo risotto. We liked trying them out, but ultimately they didn't seem to have a great deal of flavor. Maybe they were simply overpowered by the chorizo. (To be fair, the mushroom man warned me they were very mild and more for texture and color than taste.)

We spent yesterday watching movies, including "The Lost World" from 1960, where a group of adventurers encounter dinosaurs in the jungle and have to escape through a lava-filled cave. Jill St. John wore a pair of slim-fitting '60s pants during the ordeal that, come to think of it, were pretty much the color of our oyster mushrooms!
Posted by Steve Reed at 7:06 AM