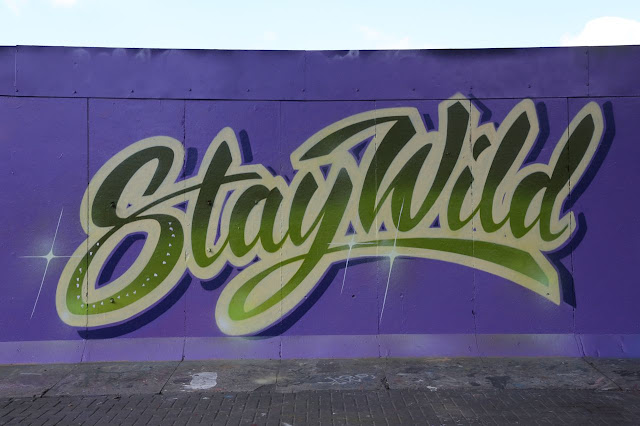 I guess to "stay wild" one would have to be wild in the first place. I'm not sure this really applies to me. But we are off to Paris today, so I suppose that counts as slightly wild, right? Maybe I'll eat an extra croissant or two while I'm there.

We have 11:30 a.m. reservations on the Eurostar train through the Chunnel for the two-hour trip. We're staying in Montmartre at the same hotel where I stayed when I went to Paris the first time, back in 2000. (At virtually this same time of year, actually.) And Dave has booked us an evening at this restaurant, because he wants some really exceptional French food (though in Paris, any corner cafe is likely to be good).

I'm taking the computer and the camera, and I do hope to blog from there, depending on the reliability of le wi-fi.

We had a scare with Olga when she developed an upset stomach yesterday morning. I called the vet and the kennel, knowing we were about to depart, with fearful visions of having to cancel the trip. But neither the vet nor the kennel owner were concerned about her symptoms, so we stuck to our plans.

And sure enough, when an attendant for the kennel picked up Olga yesterday evening, she trotted off with him just as excitedly as she would have with us, and she never looked back. It's depressing to discover our dog is so...indiscriminate.

Oh, and I finished that weighty Richard Brautigan biography, "Jubilee Hitchhiker." Mission accomplished! It really was good and remarkably detailed -- definitely worthwhile for anyone with an interest in his writing or in the literary culture of the '60s and '70s. I was impressed by how hard he worked for his success, constantly corresponding and networking with editors and agents, and also how many talented people he grew to know -- the San Francisco beat writers in his early years, and Peter Fonda, Jimmy Buffet, Tom McGuane, Jeff Bridges and others during his later residency in Montana. Connections mean so much, don't they?

(Photo: Graffiti on Latimer Road, North London.)
Posted by Steve Reed at 6:33 AM