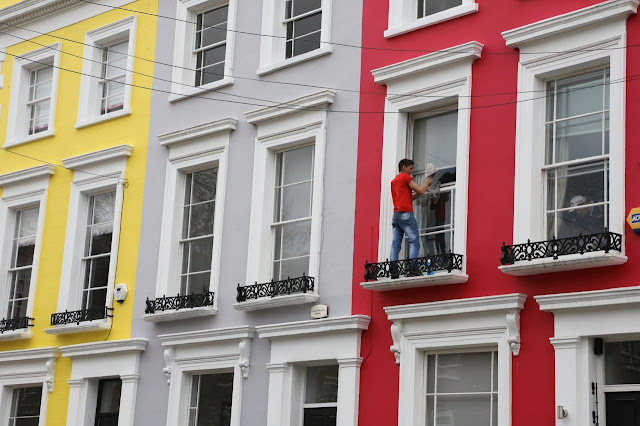 Margaret Thatcher's funeral is today at St. Paul's Cathedral, and I'm trying to decide whether I want to go down and spectate. Given what happened in Boston on Monday I'm not sure I could get very close -- the police presence is going to be huge -- but it might be interesting to see who turns out. Thatcher was such a controversial figure there are bound to be some protesters, as well as plenty of dignitaries, on hand. We'll see how ambitious I feel. I might just stay home.

I bought a Romania guidebook on Monday to begin preparing for our trip next week. (To refresh your memory, Dave is taking a student group to a band event and I'm tagging along on my own dime.) I'm really looking forward to this one, almost more than Paris. I'm drawn to unusual destinations! It seems like there's plenty to do and see in Bucharest, which is where we'll be, but I hope to get out into the countryside a bit as well. It all depends on the ease and speed of train travel.

Remember that lingering web site project I was supposed to do for my former boss? Well, I've been dragging my feet, and a few days ago I finally wrote her and told her it wasn't likely I was going to get to it. I just have too much going on here -- my substitute scheduling job for the school, Olga, photography. My life has moved on, you know? I felt really guilty about it, but she wrote me back and said she's actually quit the site herself, so I'm completely off the hook. Whew! We both had a lot of misgivings about the project from the beginning, and the compensation is not commensurate with the workload. I'm glad to be free of it.

I wish we could get some answers about Boston. I know this is likely to take a very long time to sort out, just like the Atlanta Olympics bombing or the Unabomber, but at the risk of sounding like Veruca Salt, I want to know NOW!

(Photo: Window washers in Notting Hill, on Monday.)
Posted by Steve Reed at 7:17 AM