Boots may be made for walking, but mine, at least, did not walk to Margaret Thatcher's funeral yesterday. In the end I didn't have the energy or motivation to brave the crowds. We did watch an account of it on the news, though -- we couldn't avoid it if we'd tried -- and apparently it was quite a spectacle. Many Thatcher supporters showed up, as well as some protesters who turned their backs on the funeral cortege as it passed. Emotions run high when it comes to Thatcher, even now.

Rather than go down to the funeral, I took Olga for a long, long walk along the Grand Union Canal and through Maida Vale. One of my goals was to take a photo of the windowsill above, which I'd seen on a previous walk. The fact that I'd rather shoot this windowsill than a genuine news event shows why I will probably never make a million dollars. 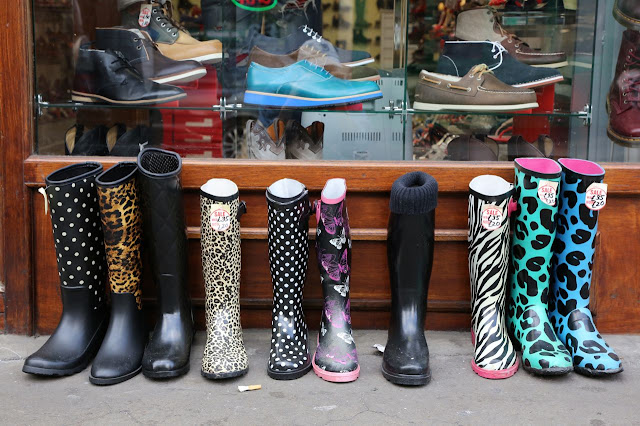 The weather here has improved considerably. We've gone from freezing cold and rainy to sunny, windy and mild in the space of a week or so. Perhaps optimistically, I've washed my jacket, hat and scarf and put them away for the season.

(Top: Windowsill in Maida Vale. Bottom, boots for sale on Portobello Road.)
Posted by Steve Reed at 7:03 AM