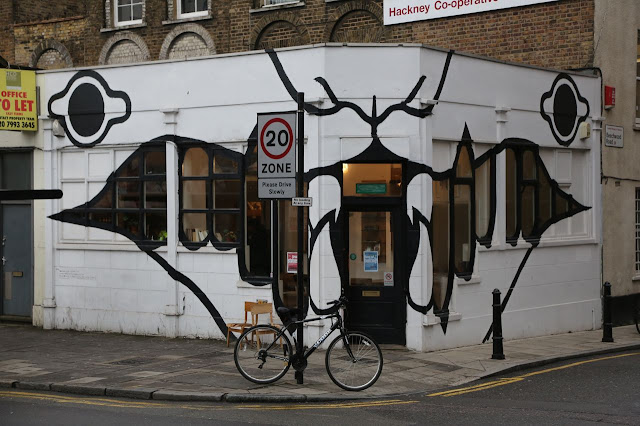 We had snow yesterday. SNOW. And not just polite springtime flurries, but full-on, big-white-flakes snow. The ground was too warm for it to stick, but that's a small consolation.

I took Olga for a long walk yesterday morning up into Maida Vale, the neighborhood northeast of Notting Hill. We spent some time wandering along the Grand Union Canal, where she made several valiant attempts to fight with the geese (which would have kicked her butt). Then I tried to swing by the pet store to get her more food but I keep forgetting our pet store is closed on Thursdays. An errand for today! 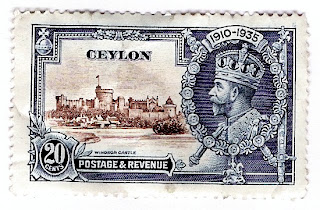 In the afternoon, on the way to meet my friend Sally for a walk in Hackney and a movie, I found this great old stamp lying on the sidewalk. How a 78-year-old stamp featuring King George V from what was then the British colony of Ceylon wound up lying on a wet sidewalk in Notting Hill I have no idea. I picked it up and tucked it into a plastic case in my camera bag, and dried it out when I got home. It's a bit rumpled, but I'll add it to my childhood stamp collection, and I expect it will flatten out over time.

Anyway, Sally and I had arranged our walk weeks ago, thinking it couldn't possibly be cold and miserable in April. When it became apparent the weather wouldn't cooperate, we tried to go to the Geffrye Museum as an alternate plan. But it was between exhibits, so we decided to bundle up and walk anyway. I got lots of great photos, including the peculiar cat-face building above.

We went to a pub for dinner (lentil stew!) and then to the movie, a tenth anniversary showing of "Finisterre," a poetic paean to London by the band Saint Etienne. (Here's the trailer.) It was good, as beautifully photographed and scored as Saint Etienne's subsequent film, "What Have You Done Today Mervyn Day?" There was a discussion after the movie with the director but I confess we didn't stay, because by this time it was 10 p.m. and I was barely keeping my eyes open!
Posted by Steve Reed at 7:15 AM