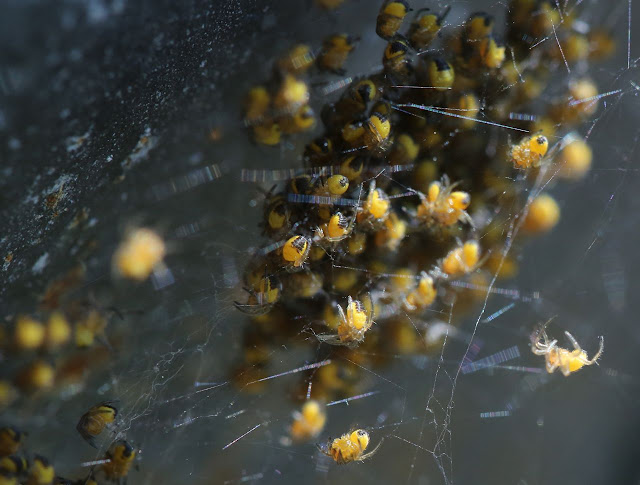 Remember Pat, our Arachnopet, who lived in one of our balcony shrubs all last summer? After hanging around for months, feasting on flies and growing ever-larger, Pat -- so named because we were uncertain of gender -- disappeared when the weather changed in the fall. I remember seeing her hunkered down under a leaf on a cold, windy, rainy day, and then she was just gone.

She still has not reappeared, if, indeed, she survived the winter. But yesterday morning I found a swarm of tiny, pinhead-sized spiders on the pot of the shrub where Pat lived. She apparently left an egg sac -- at least one -- and it had hatched. 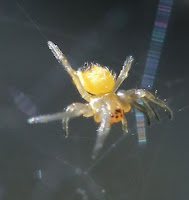 The spiders swarmed out onto their own little web, and after an initial period of exploration and dispersal, seemed to coagulate into two little clumps. I wondered if this had something to do with protection from the sun and the heat of the day. No telling.

To make a long story short, it looks like we'll have more Pats hanging around this year. Surely all these guys won't make it -- that would be a little much, the stuff of horror movies. But I could deal with one or two or even a handful, as long as they don't come inside.

I guess there's no question about Pat's gender now!
Posted by Steve Reed at 5:42 AM

I think they die after laying their eggs. Anyway, how cool that you happened to see their emergence. I brought home a praying mantis egg sac once and had them for years after in the yard. Once or twice I was lucky enough to spot the cluster of brand new baby mantises all clustered together.

Yeah. You will be dealing with Pat's offspring. How lovely, if you don't mind spiders, which I do not.

Patty was a great mother, it would seem.

These spiders are MUCH cuter than the beast I took a picture of last week (which was smaller than a dime, but black & hairy).

'Tis the season for spiders...I'm finding them in the tub in the early AM and then sending them off for a swim. Very cool photos!