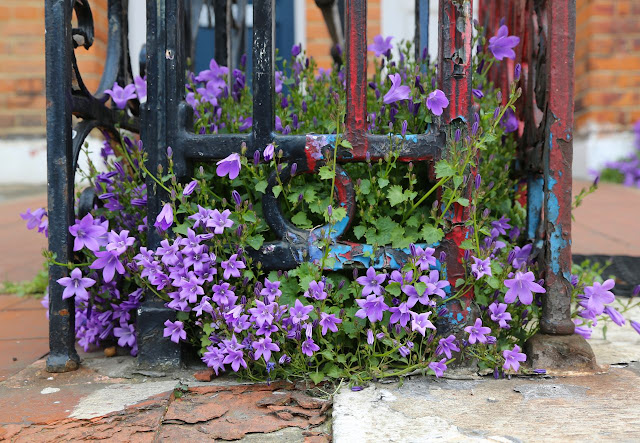 It's 43ºF out there this morning -- and it "feels like" 37ºF, whatever that means, according to the people at weather.com. I got my winter jacket back out of the closet. Time to face facts. *sigh*

Despite the temperatures, the campanulas believe it to be spring, as you can see above. They're blooming wildly now. Except ours, which for some reason is a bit moribund. I wonder if bringing it indoors during the winter somehow dimmed its enthusiasm. Maybe it needs the wintry shock to set buds. (In which case it may be blooming just fine a few weeks from now, since it's out on the balcony enjoying our Arctic blast.)

The job interview went well yesterday, from what I can tell, and I've been asked to come back again early next week. So that's a good sign!

I walked Olga over to Latimer Road yesterday, where much to my surprise Mr. Styles' artwork is still unmolested. I guess others like it as much as I do.

I've also been plowing my way through several accumulated back issues of The New Yorker. More dreadful news from Syria -- but written in riveting style -- and a quirky article about "treadmill desks," where office workers can slowly walk while typing or on the phone in order to maintain physical fitness. I felt guilty for sitting on the couch while reading the article! I kind of like the idea of a treadmill desk, I must admit, though I do think at some point in life we all ought to be allowed to sit down.
Posted by Steve Reed at 6:19 AM

Ms. Moon wrote a hilarious post about the treadmill desk the other day -- I haven't read the article yet, but I'm going to! I've thought about a standing desk, but treadmilling it seems a step (or many!) too far.

Gorgeous flowers...That article made me laugh.

I'm sorry it's cold again. Good lord. I think I would have a very hard time living there. As much as I love the ladn and that city in particular, I might become depressed.

Good luck with the job!

The planet is definitely shaking things up weather-wise. I really don't care what is going on in Syria, who is killing who. I just hope we don't get involved in it. they need to work out their own problems. maybe that makes me seem heartless about the innocents who get killed but I'd rather see us feed the hungry.

We have the opposite problem here: Forecast to possibly be 100.

Elizabeth: Actually, I did read her post as well! Given your current regimen of walking maybe a treadmill desk would be in order -- but I agree, it DOES seem a bit extreme.

E: Aren't they great? They're everywhere this time of year.

Reya: Well, this is extreme, and not representative of what the weather should be like at this time of year!

Ellen: I know what you mean about Syria. I wrestle with how to handle it. I absolutely do NOT want any kind of military involvement. Humanitarian aid, on the other hand, seems reasonable and even somewhat obligatory. I worry about where all this is headed. Even if Assad is overthrown, as seems inevitable, his successors could be quite scary, and they'll have a heck of a job holding that country together.

E: Yikes! That's crazy! And inconceivable to me now...